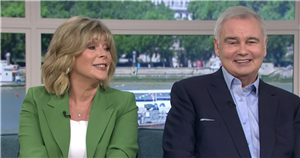 Eamonn Holmes wasn’t happy with the Duchess of York on Monday, as she appeared to brutally snub This Morning – while consenting to appear on another ITV show.

Eamonn was presenting alongside wife Ruth Langsford to hold the fort in Holly and Phil’s absence.

As they introduced the Loose Women panel, who would be appearing on the ITV schedule straight after the morning show, it became clear they would soon be joined by a royal guest.

Sarah Ferguson, Duchess of York, was appearing to discuss the release of her debut novel.

She has appeared on various programmes to promote her latest book – a romance novel entitled Her Heart For A Compass – in recent weeks.

Loose Women star Charlene appeared briefly on the show to make her introductions and tease the audience on what would be coming up in the programme.

"Hi guys!" she said cheerily into the camera, explaining: "Now, we’re all on our best behaviour today aren’t we ladies as we’re being visited by royalty."

She continued: "We certainly are.

"Yes, Sarah Ferguson, the Duchess of York, is stopping by for a chat about life as a grandma plus why her new romance novel could be about to be made into a movie.

Ruth couldn't resist a cheeky dig at her ITV co-stars, as she chuckled: "Oooh, look at you with royalty!"

But Eamonn clearly wasn't impressed, as he grumbled: "So she’s been on everybody’s show except ours.

"She’s been on Lorraine with Christine [Lampard], she’s on with them. How come they jump out us and miss the middle?"

Ruth couldn't resist getting in on the action, as she quickly put in with a smirk: "She has, yes, what’s happened? Why’s she snubbing us?"

Sarah, meanwhile, went on to discuss her new book with the Loose Women panel.

Set in London back in 1865, the book centres around the free-spirited Lady Margaret Montagu Scott, who flees an arranged marriage.

Margaret soon heads off on a journey of self-discovery to Ireland, America, and finally back to Britain – searching for her place in society.

The Duchess is said to have incorporated research into her heritage along with elements of her own "unique life journey", alongside co-writer Marguerite Kaye, to craft a fictional account of her great-great-aunt, Lady Margaret Montagu Douglas Scott.

This morning airs from 10am on weekdays on ITV.