Here’s your early look at Spin, Disney Channel’s first original TV movie with an Indian American lead centered on Indian culture — and only ET has the exclusive scoop.

Spin follows Rhea (Diary of a Future President‘s Avantika), an Indian American teen who learns she has a passion for creating DJ mixes that blend the textures of her Indian heritage and the world around her. Her life revolves around her eclectic group of friends, Molly (To All the Boys I’ve Loved Before‘s Anna Cathcart), Watson (Jahbril Cook) and Ginger (Kerri Medders), her afterschool coding club, her family’s Indian restaurant and her tight-knit, multigenerational family, which has only grown closer since her mother’s passing. Everything changes when she falls for aspiring DJ Max (Michael Bishop) and a long lost fervor for music is reignited. Rhea discovers that she has a natural gift for creating beats and producing music but must find the courage to follow her true inner talent.

While Spin does not have an official premiere date (yet), the upcoming DCOM — premiering some time this year — is groundbreaking in its existence. Directed by Manjari Makijany, the film breaks barriers with an international Indian-led ensemble that includes Bollywood star Abhay Deol as Rhea’s father Arvind, U.K. comedian/actor Meera Syal as Rhea’s grandmother Asha and Aryan Simhadri as Rhea’s younger brother Rohan.

“I’m so eager to have this movie out in the world — as a reminder for young Indian girls, and anyone really, to follow their aspirations,” Avantika exclusively tells ET over email. Added Makijany, who grew up in Mumbai, India, and now resides in the U.S.: “I was beyond thrilled to introduce my culture through Rhea and her family to a broad audience. It’s so important to see someone like myself represented in a mainstream way.”

Here, Avantika and Makijany open up about being trailblazers in the first Indian American DCOM, what they hope audiences take away from the film and much more.

ET: Spin is Disney’s first DCOM centered on an Indian American character and Avantika, you’re the star! What was your initial reaction when you got the job and how significant of a moment is it knowing you’ll be inspiring a new generation of young Indian American girls with this film?

Avantika: It is so surreal. My mind has just started to wrap around the fact that I have this opportunity. The opportunity to live out every kid’s fantasy of starring in a Disney Channel movie. It makes me incredibly excited for the future of myself and, especially, the young girls who will watch this movie. This movie has been several years in the making and I have been associated with the process (both directly and indirectly). So to finally see this impactful story coming to fruition, is a dream come true. No other way to put it. I’m so eager to have this movie out in the world — as a reminder for young Indian girls, and anyone really, to follow their aspirations. Surprisingly, I was told in the room that I had booked the job. That moment is forever etched in my mind — for its significance, and also for the level of embarrassment. The full story of my reaction is actually really hilarious! But to sum it up, my true initial response was sweating profusely. But once the reality had finally registered after a minute or so, I remember crying and laughing hysterically. Wouldn’t anyone, though?

What was most important to you in bringing Rhea’s story to life?

Manjari Makijany: I feel it’s an honor and privilege to direct Disney Channel’s first Indian American movie. I was beyond thrilled to introduce my culture through Rhea and her family to a broad audience. It’s so important to see someone like myself represented in a mainstream way. I grew up in Mumbai and live in the U.S., so it was imperative to represent both these worlds as authentically as possible in every aspect of the film from production design to costumes to even the accents. The Indian culture focuses on family, love and it’s incomplete without celebrations and music. I wanted to steer clear from stereotyping the characters and represent them in a real and more contemporary manner. Rhea’s character was brought to life through great attention to detail from her choosing her costume changes (some of which were made in India for authenticity), the color palette to eventually the music which translated as the final expression of her passion and talent. 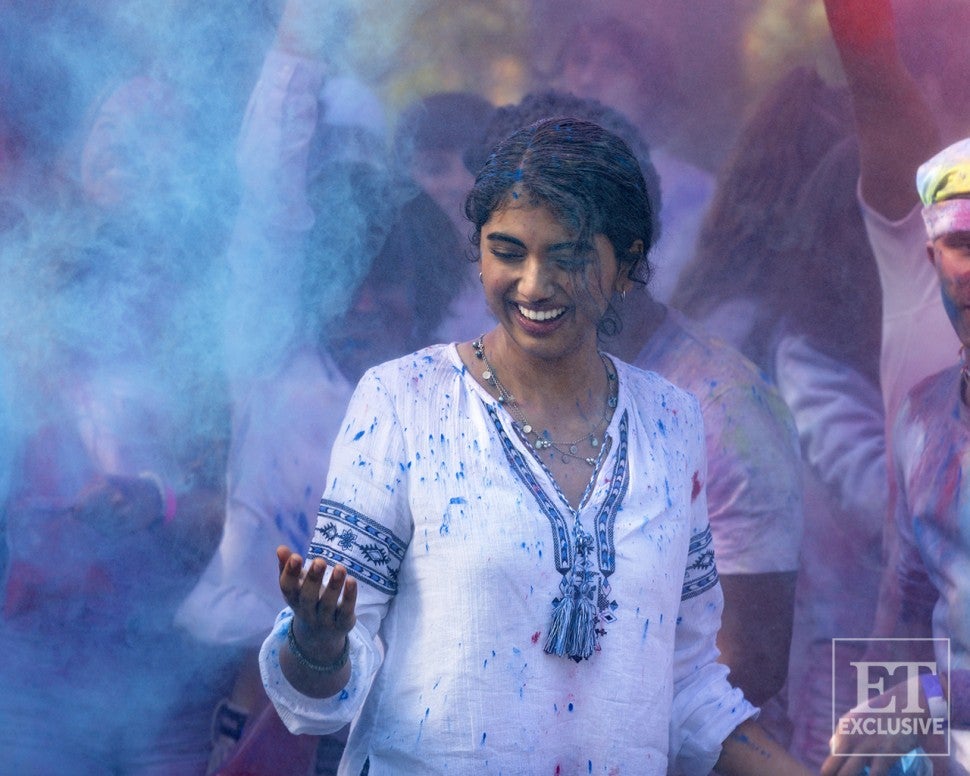 Rhea takes part in a color run school celebration inspired by the popular ancient Hindu festival Holi, also known as the Festival of Colors. Holi will be celebrated this year on March 28-29.

In finding the perfect star for this film, what did Avantika have that brought the character of Rhea to life? Were there any pleasant surprises that you discovered through her performance?

Makijany: Avantika has lived in India and the U.S. and she understands both the western and the Indian culture really well. I met Avantika for barely 15 minutes before her official audition and in that conversation, I knew she had what I was looking for in my Rhea. The person playing a character is important to me and she did an impeccable job of understanding the character in a deep way. Avantika is a nuanced actor who manages to pull off complex moments effortlessly. I observed her growth through our rehearsal workshops where she would absorb information and exercises like a sponge and eventually, on set, she would bring it out in her performance in the most impressive way. It was a delight to work with her and I have no doubt she’s going to be a huge star!

Avantika, what can you tell us about your character, Rhea, and what did you immediately connect with?

Avantika: Rhea is one of the most compassionate and empathetic people I know. Her loyalty to her friends and family is unparalleled. I gravitated towards her immediately because of her determination to do everything. She is ambitious and tries her best to fulfill commitments to friends, help out family, and pursue her dreams. I am constantly in awe of people who are able to do so much, and Rhea’s drive was what made me so eager to play her.

Since Rhea has a deep love for music and DJing, were you able to fully embrace that side of you for this movie?

Avantika: In all honesty, I genuinely feel that I was able to fully embrace that side of me. I grew up being a dancer — I still am — and I love working with rhythm and beats. DJing weaves music production into all the other melodic elements that I am familiar with; it made me feel at home but also challenged me just the right amount. I love to sing as well — and though Rhea doesn’t sing in this film — I still had the opportunity to incorporate my knowledge of songs into her character and the pieces she creates. As an actor, I am so blessed to be constantly pushed to learn. To learn new arts, to learn new skills. This movie excited me enormously throughout the entire process because, just as Rhea is learning how to DJ, so was I.

What was the most memorable moment you had on or off set?

Avantika: So many memorable moments, it really is hard to choose. But one of the memories that I hold really close to my heart is a moment I had with Meera ji. She does a beautiful job at playing Rhea’s grandmother and her performance is one of the highlights of this film. During an emotional scene with her, it got to a place where I suddenly burst into tears and hugged her. She just held me tightly for the rest of that shot and began tearing up. And for the rest of the shoot of that particular scene, she just held my hand. To work with an actor like her — who is that committed and giving — it truly is a rare privilege. I remember those few hours in such vivid clarity. They’ll remain etched into my memory forever.

What do you hope people take away when they watch Spin?

Makijany: I hope people leave inspired and entertained after watching Spin. It’s a story about listening to your inner voice and going after your passion. We’re all gifted with unique talents but often disregard it as we’re going about our everyday life. The magic lies in finding that passion and embracing our talent to share with others. Spin is also about friendship, love and respect for the family and pursuing what makes you happy. The music, colors and characters are all crafted to give audiences a glimpse into the amazing Indian culture through Rhea’s journey of finding her passion expressing her true self.

Avantika: Spin has so much to offer to almost every individual, all the way from the ambitious adolescent to the overprotective, worried parent. If anything, I wish that viewers are inspired to surpass the limits they’ve set for themselves. We as humans are our worst critics. We tend to restrict ourselves to only the possibilities we deem as feasible when, in reality, we are capable of so much more. Hopefully, after watching Spin, viewers will be motivated to venture outside of their comfort zone.

Watch the first teaser for Spin, exclusively at ET, below.