Death in Paradise is a firm favourite with BBC viewers, but one episode has left some scratching their heads. Throughout the nine seasons, various Detective Inspectors have solved many murders, however, in the finale of series six, something out of the ordinary was spotted.

Murder in the Polls saw Victor Pearce (played by Geoffrey Burton) attacked when registering his vote.

It was down to DI Jack Mooney’s (Ardal O’Hanlon) to solver the murder alongside Florence Cassell (Josephine Jobert).

And while Jack and Florence were busy trying to find the culprit, viewers were left confused by the timeline of events.

Taking to Movie Mistakes to comment, one user wrote: “Days in the series seem sometime to go on for unusually long amounts of time. 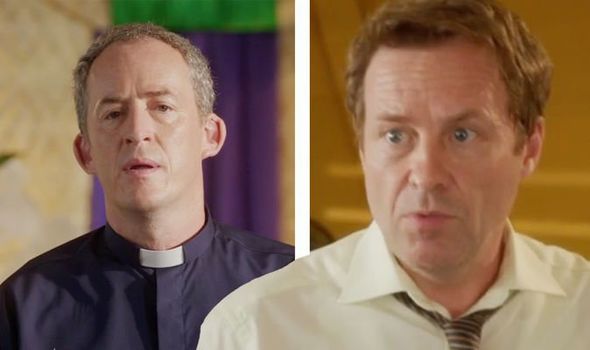 “In this episode, there’s the exact opposite; the murder happens at 10 AM (which already seems awfully late for the opening of an election).

“The police obviously are called right away, Jack and Florence go to the station to discuss the case.

“And then all of a sudden it’s a wrap when Dwayne and JP get back there with their findings.

“Unless they have searched the businessman’s residence for over 6 hours while Jack and Florence have been doing next to nothing at the station, it makes no sense!” The comment concluded.

In regards to the episode itself, viewers saw Jack and Florence try and work out what happened – step-by-step – the evening Victor was killed.

They returned to the church where the voting was being held and a flashback was played out on screen.

“Florence, would you mind doing me a favour, could you go and stand in the boot Victor was in,” to which she did.

“Now, the fan wasn’t working and there was no pen in that booth and Revered Dawson handed Victor one, Catherine was in here,” Jack revealed.

“Legs visible there, and that’s when Victor was stabbed.”

With his mind going into overdrive, it seems Jack managed to work out who the killer was.

In true Death in Paradise style, Jack gathered all the witnesses and suspects to deliver the news.

“Catherine had no alibi, she also had the means of committing the murder, being in the booth right next to the victim. But it wasn’t Catherine who killed Victor Pearce,” Jack revealed.

Miss Bousquet interrupted and asked who it was then.

“Ah, straight to the point, Miss Bousquet. You know I like that about you. I appreciate your directness, thank you. And in answer to your question… it was you [who killed Victor],” Jack stated.

“Don’t be absurd. How could I have done it?” Miss Bousquet replied. “I was in the storeroom the whole time. Judith will vouch for me, won’t you?”

Judith did vouch for Miss Bousquet because she was an accomplice.

Death in Paradise is available to watch on BBC iPlayer.