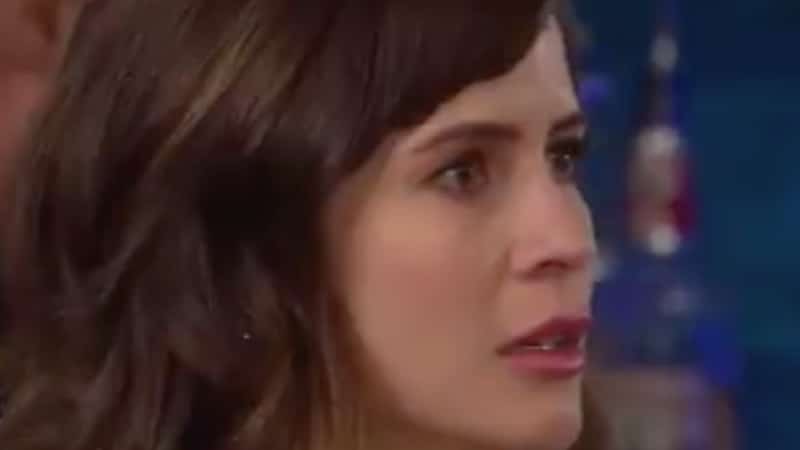 Days of our Lives spoilers for the Monday November 5 episode of NBC’s soap promise a ton of trouble is dredged up when a certain character gets a funny feeling. Or is it a funny character who gets a certain feeling?

What we can tell you is that fresh off the Halloween week frights, Susan (Stacy Haiduk) keeps up the party train with another odd premonition.

Last week she had a whopper of a revelation when she was certain that Rex (Kyle Lowder) and Sarah (Linsey Godfrey) were due for a little bundle of joy. Well, she was half right. In fact she accurately guessed that Rex is Baby Bon Bon’s real father.

This will throw all kinds of kinks into Rex and Sarah’s relationship. He had a one night stand that he forgot to mention with Mimi (Farah Fath), something that Sarah considers a no-no faux pas. But, is it a deal breaker?!

Rex broke Sarah’s heart – and now she wants to break his face. Watch Days of our Lives, weekdays on NBC.

Her next intuition has to do with her own son, E.J. What does Susan see in that brain of hers? Let’s just say that Sami (Alison Sweeney) will be floored when she hears the news.

But Sami has a shock of her own when she reads the DNA test results on the mystery patient. Keep in mind, this is the same place that knowingly uses budget, inaccurate DNA tests–just ask Lucas (Bryan Dattilo)!

It’s so incredible and unbelievable that poor Sarah goes running out of the blingy party, leaving Rex gobsmacked. Is this the beginning of the end for these two? Tune in and find out!

Days of our Lives airs weekdays during the day on NBC.