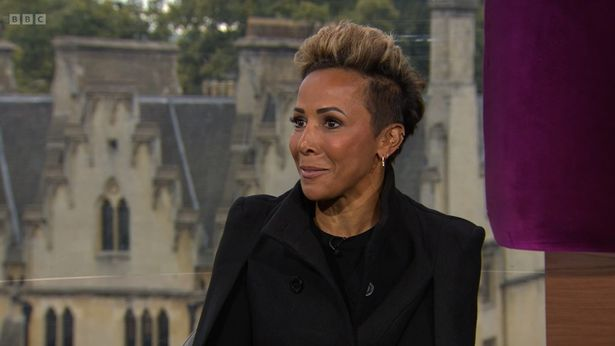 Dame Kelly Holmes felt obliged to pay her respects to Queen Elizabeth II, following her death and waited 11 hours to see her lying in state.

Her Majesty died peacefully at Balmoral on September 8, at the age of 96. The late monarch’s state funeral took place today, starting with a service at Westminster Abbey.

Ahead of her funeral, people from across the world descended upon London to pay their respects to the late Queen and see her coffin in Westminster Hall, with the lengthy queues hitting headlines.

A number of celebrities, including David Beckham and Tilda Swinton, waited patiently to pay tribute, including Dame Kelly.

Speaking to presenter Huw Edwards on BBC News on Monday, she recalled the mood as she waited in line in the queue, before explaining her decision to join it.

‘It was a remarkable day,’ she said. ‘I met so many people; people of all ages. I felt compelled to be in that queue. I had to do it. I changed all my plans for the weekend.’

‘I didn’t mind if I had to stay there for 24 hours,’ Dame Kelly added. ‘I felt it was my goodbye to her as she was very important in my life.’

Dame Kelly, who received her Damehood from the Queen for her services to sports in 2005, recently made her first appearance as a regular panellist on ITV chat show Loose Women where she explained that she made a ‘lifelong allegiance’ to the Queen upon joining.

‘There’s a real personal link between the Armed Forces and the Queen being the Commander in Chief and anyone who serves because you have to say a pledge of allegiance to the Queen,’ she said.

Head to Metro.co.uk’s Queen Elizabeth II tag page for the latest updates, and sign Metro.co.uk’s book of condolence to Her Majesty here.

‘That’s the first thing you ever do, so for me that was always a life allegiance because you serve the Crown and not the government.’

The Queen’s funeral service began on Monday morning. Her coffin has been borne through Horse Guards Parade, where her majesty presided over scores of Trooping the Colour ceremonies during her reign.

It has now has entered The Mall, as the procession continues towards Buckingham Palace.