On the episode, contestants were tasked with making a word out of the letters U, B, C, E, D, M, I, U and G, and offered sensible options such as “imbued”.

However, Susie Dent then offered “budgie”, leaving the remaining three letters to spell a… well, erm, rather naughty word. We’ll let the picture do the explaining: 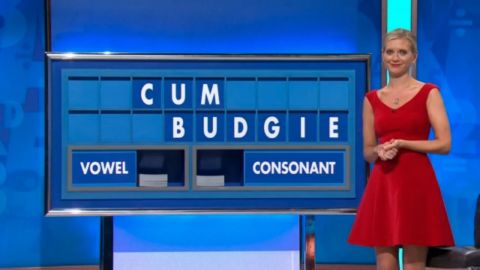 While those on air didn’t seem outwardly fazed by what was facing them – after all, that word does have a less explicit meaning too – Rachel Riley later poked fun at the blunder on Twitter.

“Anyone in need of a new creative insult, @C4Countdown is at your service! Come on, we all know one…” she wrote.

Susie tweeted in response: “Don’t you dare look to me for the definition,” leading to Rachel retweeting a number of suggestions for the meaning.

“This is where staying quiet gets you @susie_dent. Simultaneously appalling and genius use of puns,” she joked.

This is why we love Twitter, and it seems quite a few viewers found the letter board’s latest wonder pretty hilarious too:

Of course, this isn’t the first time that Rachel (and all of us) have been left amused by a Countdown word after a contestant suggested the word “panties” earlier this year. She later joked that the letter board was “trolling” her.