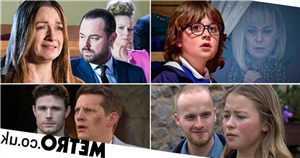 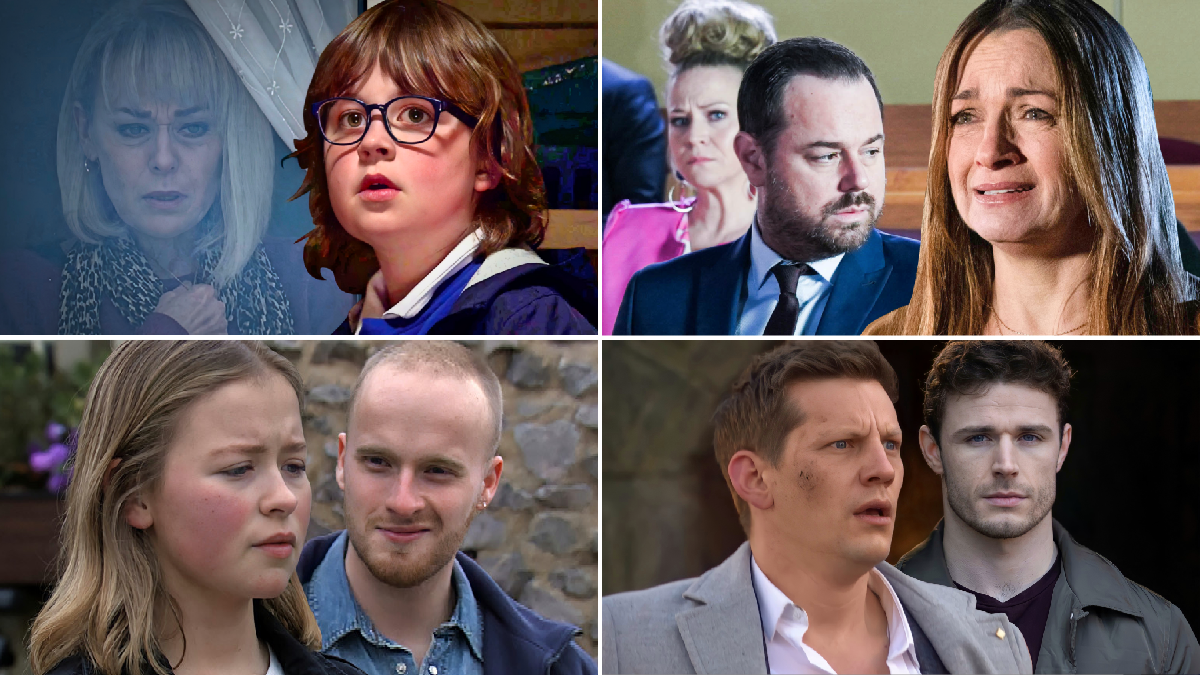 It’s that time of week again when we bring you brand new soap spoilers – and it’s safe to say that, no matter which soap is your favourite, next week is a huge one for all of them.

With Sharon Bentley (Tracie Bennett) out of options, the Coronation Street legend dos the unthinkable, as she sets in motion the kidnapping of little Sam Blakeman (Jude Riordan)!

Katy Lewis (Simone Lahbib), meanwhile, makes an emphatic return in EastEnders, and wastes little time in attempting to win over Frankie (Rose Ayling-Ellis), but will she get what she wants as her day in court arrives?

Emmerdale’s Liv Flaherty (Isobel Steele) continues to seek solace in the booze, and while on an alcohol run, she invites stranger Max back to her house.

And last but oh so not least, it’s a huge week for Hollyoaks, as the identity of George Kiss’ (Callum Kerr) killer is at last revealed.

Natasha confiscates Sam’s phone when she realises he’s been in touch with Nick. Sharon, meanwhile, tips off Harvey about Sam’s movements – and he his sidekick Noddy later lures the little lad into a van. The door slams shut, terrifying Sam. Sharon watches from afar, realising that she’s done the unthinkable in setting this in motion.

Jenny is uncomfortable when Johnny quizzes her about their new B&B guest. Ronnie, meanwhile, takes Jenny for a ride in Ed’s camper van and, afterwards, the chemistry between them is electric. After Ronnie’s wife Kat shows up, Jenny reckons it’s time he moved out – but Ronnie begs her for another chance. Jenny soon has other things on her mind, however, as Johnny arrives home!

Aadi’s intrigued by Asha’s desire to defend Corey, but Asha clarifies things for him, explaining that she despises Corey – and reckons that he’s guilty as sin. As a result, she’s pretending to be on his side, so that she’ll be there if he slips up – meaning that she’ll be able to get the truth.

Mick sets about writing his victim impact statement ahead of the court case, but little does he know that Katy has arrived back in Walford. Frankie soon finds out, however, and emotions run high when Shirley claims that Mick’s statement will be enough to put Katy away. Frankie crosses paths with her mum, who asks for her to provide a character reference. She claims that she turned down Katy’s request, leaving Shirley proud of her loyalty, but she’s evidently conflicted.

A mystery man named Terry bumps into Rainie at the Tube station, and asks for directions to Albert Square. At Ruby’s, he entertains a crowd, when Sonia shows up and berates Dotty for hostessing and speaking to old men! Sonia later comes into contact with Terry once more at The Vic, and – mortified – she disappears. Terry approaches Denise and Tiffany, explaining that he’s Sonia’s dad!

Martin receives quite the shock when he arrives at the club to find Zack flirting with Ruby. Troublemaker Zack later flirts with Ruby once more – this time in front of Martin and Lily! Lily wastes little time in asking Ruby if she fancies Zack! Ruby is taken aback, and tells the young girl to mind her own business and stay out of it! Lily then informs Martin that – while he was away – Ruby spent a lot of time with Zack, and even had him spend the night!

Liv continues to drink, feeling guilty over what happened with Paul. She heads to the pub, when she meets a sleazy stranger named Max, who she invites back home. Liv is increasingly uncomfortable in Max’s company, but Aaron intervenes – leaving her upset. Chas decides to step up, as she arrives, locks the door and steals Liv’s phone – putting the young woman under house arrest until she sobers up.

Kim decides to make an appointment for a proper dementia test. Gabby, however, spots the appointment in Kim’s notebook, and encourages her to keep it a secret from Jamie. A mystery figure later laces the brandy decanter with diazepam, and Kim pours herself another glass. As the day of her dementia test arrives, she’s terrified of going alone, and Jamie is appalled to discover that Gabby knew before he did. Gabby is outed for her meddling, but how will Kim react?

Ben opens up to Victoria, and it’s clear that he’s not as over Aaron as he claims to be.

Ste worries that James’ feelings for John Paul could be reignited given that they’re working so closely together. James agrees to take a step back and not work on the case any more. However, he soon goes back on his word, as he assists Theresa. Leah, however, overhears a conversation, and realises that James has lied to Ste! Ste is livid when he finds out that James went behind his back, and wastes little time in confronting him.

One resident tries to cover their tracks, but their attempt to do so ultimately leads the police straight to the murder weapon! The walls soon close in, and flashbacks take us back to the scene of the crime on the night of George’s murder, as new information at last reveals what really happened. Afterwards, the hour of reckoning comes for the killer, as they prepare to come clean and reveal the truth.