Coronation Street star reacts to her exit as Natasha dies 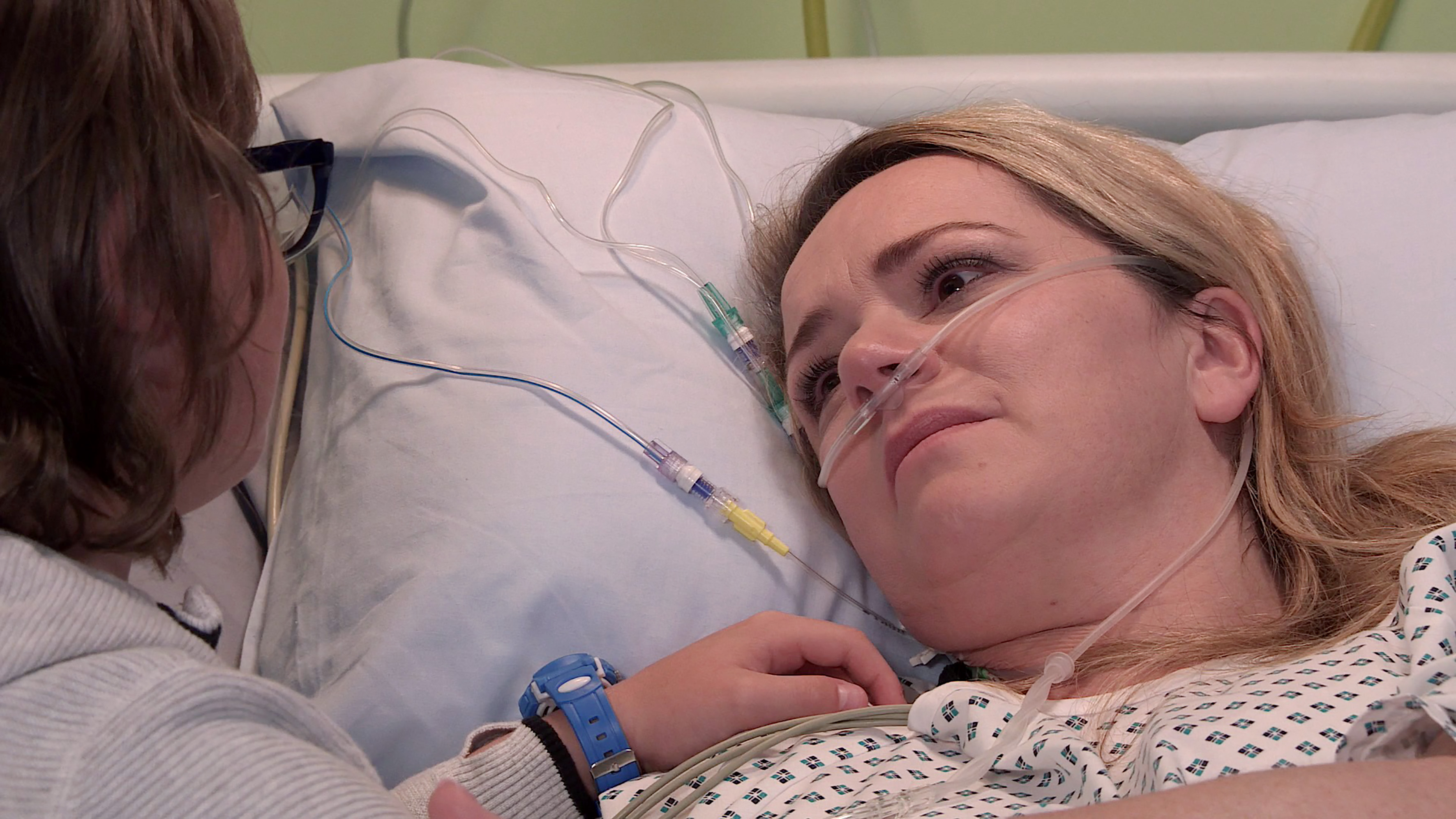 Natasha Blakeman (Rachel Leskovac) was left fighting for her life in Coronation Street, after Harvey Gaskell (Will Mellor) gunned her down in a case of mistaken identity.

The hairdresser was wearing the same Halloween outfit as Leanne Battersby (Jane Danson), who Harvey was on a mission to kill.

Drugs baron Harvey broke into Leanne’s flat in Victoria Court and swiftly pulled the trigger, delighted to have finally sought revenge. But he was unaware of the fact that it was actually Natasha who he’d shot.

Nick Tilsley (Ben Price) found her bleeding out on the floor, and quickly dialled 999. Natasha was subsequently taken to hospital, where she was told she’d need an operation to repair the damage.

Sam (Jude Riordan) popped in for a chat with his mum ahead of the procedure, in scenes which Rachel described as ‘difficult’ to film.

‘There is an element of her wanting to protect Sam,’ said actress Rachel, describing Natasha’s final moments with her son. ‘It felt like she knew it was unlikely that she’d be seeing him again so that was another reason why that scene was particularly tough to play.’

Natasha never recovered, with doctors subsequently informing both Nick and Sam that she had sadly died in surgery.

Rachel’s last day was an incredibly emotional one, she said, explaining that the aforementioned scene with Jude – who plays Sam – was particularly upsetting.

‘I’d done a bit of filming with Ben Price before Jude [Riordan] came onto set,’ said the soap star. ‘I was already feeling quite emotional but because it was my last scene filming with him from the moment I saw Jude I just started crying and I didn’t stop till they said cut.

‘It was really emotional to the point I couldn’t look at him in between takes because I just found it too difficult, it was pretty much non stop crying. I’m a very emotional person – or some might say a right softie! The bond I have with Jude is very strong and I hope that’s come across on screen.

‘It was a really emotional day for both of us, because it was our last day of filming together. We’d got each other little gifts so we ended up cheering each other up in the car park after we’d finished.

‘He’s got a really special place in my heart, from the first time I Facetimed him before I met him on set I just knew that we would get on really well and it’s been an absolute joy to film with him. I’m going to really miss working with him but we’ve said hopefully at some point in the future we’ll get to work together again.’

Natasha’s final scenes also saw her share a moment with Nick in which she – without dialogue – instructed him to look after Sam in the event of her death.

‘The way [Natasha] looks at [Nick] and his response is basically letting her know that he’s going to be alright,’ said Rachel.

‘I think she does trust that he will be a good dad to Sam despite what they’ve been through. I don’t think she’s ever doubted his love for him but perhaps sometimes his priorities. But sometimes it takes something really big to happen for people to step up and she doesn’t doubt that he will.’

Natasha was a huge part of the cobbled streets of Weatherfield throughout both of her stints, and it’s safe to say that fans will miss her dearly. Though, we must admit, we’re grateful that we got to see return after all these years!

‘It’s been an absolute pleasure to be back,’ said Rachel. ‘I feel really honoured to be a part of Coronation Street and although this time it’s been in the new building that felt like the only new element about it because there are so many of the old crew still there.

‘I was absolutely welcomed with open arms, people often talk about a sense of family on soaps and it does sound pretty corny but it is true. You’re in this bubble together, it’s very intense but despite it being 10 years ago it very quickly felt like I’d never left.

‘It definitely has that sense of family and I was really lucky to be working with Ben and Jane who are both really generous actors and were really excited to bring in this whole new dynamic to their storyline and explore the possibilities.’