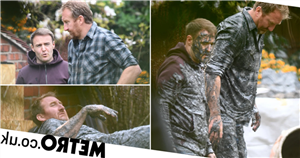 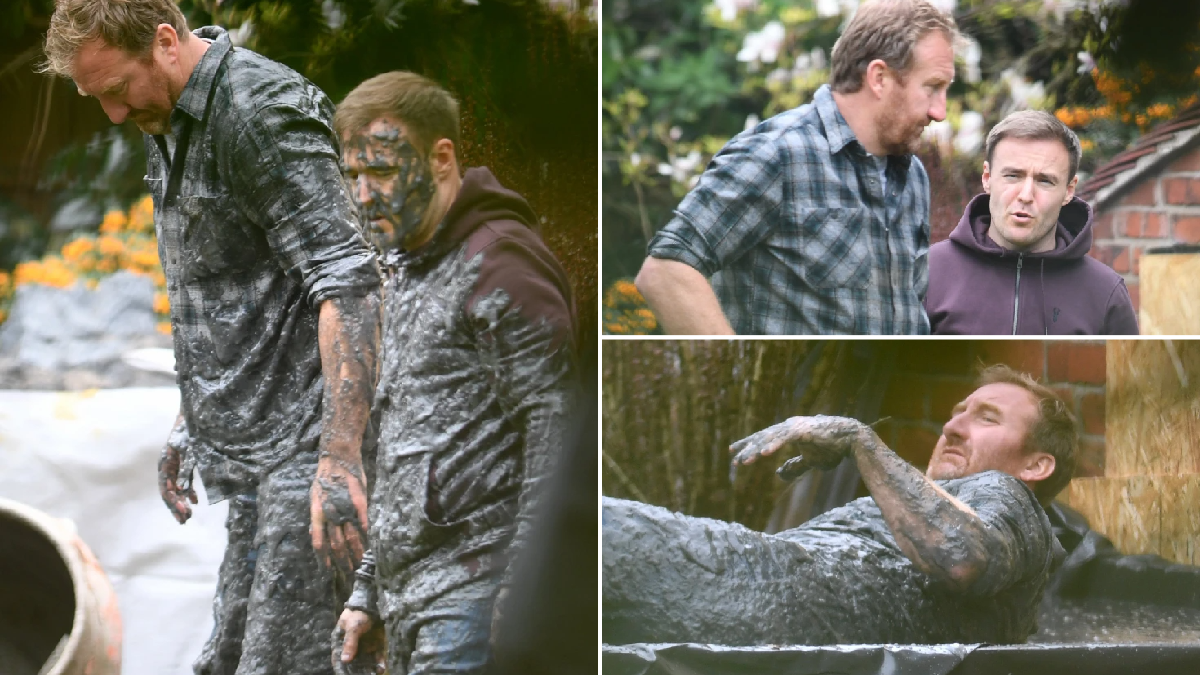 And now the love rivals are going to be in all kinds of a mess when they come to blows again.

Concrete, which seemingly can’t actually be grown, flies as they scrap around building work, which can be assumed is for Phill’s new house.

Tyrone has had to deal with Fiz moving away from the Street with her new beau and, while he has painted on an accepting approach, he has adopted the look of a kicked puppy.

Fiz and Phill are setting up home as it seems like her relationship with Ty is long over.

He had tried to drunkenly kiss her over Christmas and engaged in quite the spectacle of a fight on the Street.

Now they’re at it again – but why this time?

New pictures show scenes being filmed which show Tyrone and Phill arguing and then scrapping.

Unfortunately for them, freshly laid compost is waiting to get involved and between them, they manage to emerge in a state.

As they push and shove, all the while bickering around Fiz and the kids, they both end up falling over into the concrete.

They emerge looking sheepish after their immature display but can they make amends?

True method actors Alan and Jamie were seen absolutely covered in the grey splodge between filming.

But that didn’t stop them having a laugh between takes.

But will Fiz find the whole thing funny when she finds out that the long running feud is continuing?

Fiz and Tyrone fell apart after a mid life crisis enduring Tyrone embarked on a relationship with Alina Pop.

Pretty understandably, Fiz kicked him to the kerb.

Many fans expected the long term couple to eventually work it out but were thrown a curveball when the split seemed to be for good.

That said, Tyrone doesn’t seem to have got the memo.

As for whether there is still a chance after all of this remains to be seen.

And why the fighting has sparked off again is a secret just now. However, part of it seems to be the loss of Phill’s engagement ring for Fiz which seems to have disappeared into the cement.

But trouble is ahead and they’re all on the rocks. Or bricks anyway.

Can they work things out of will the clashes get worse?

These scenes will air in May.