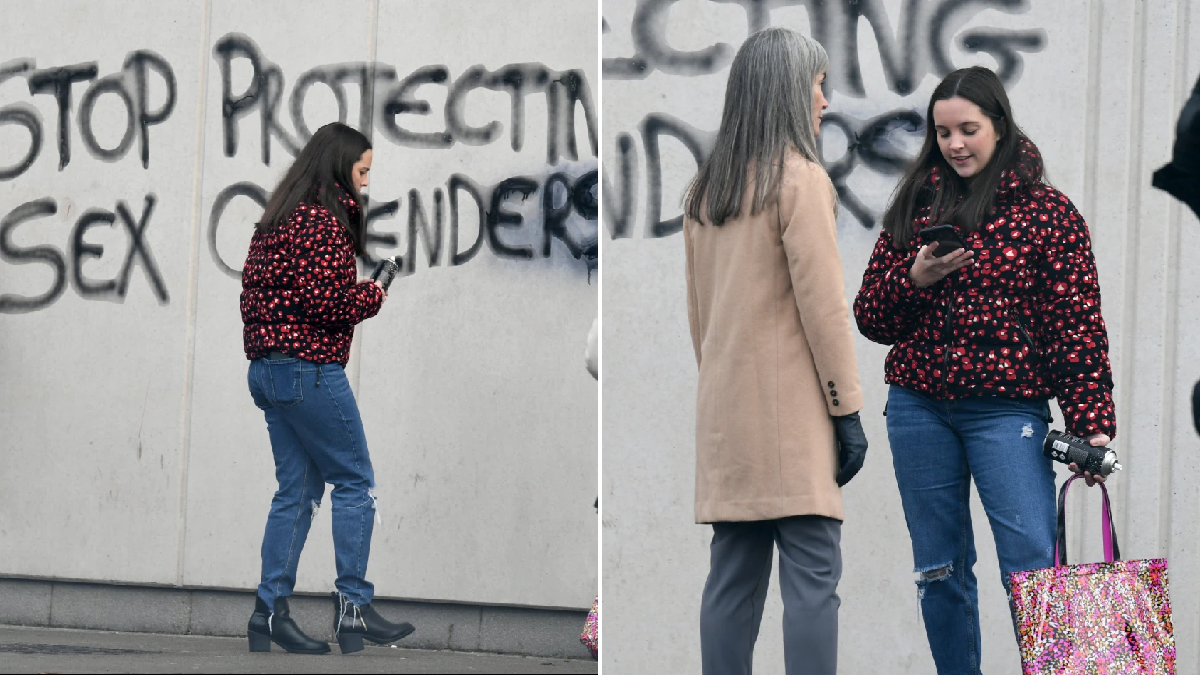 This is the moment that sees Amy Barlow (Elle Mulvaney) make a stand at Weatherfield High in Coronation Street by daubing the walls with spray paint reading: ‘Stop Protecting Sex Offenders’.

Elle has been filming new scenes which have been snapped today and she is confronted by the school’s headteacher over her actions but Amy seems defiant as she shows her evidence on her phone.

But how will the head react and who is in trouble?

The scenes will air as part of a big new storyline next year for the teenage cast, a plot which spirals from Daniel Osbourne’s (Rob Mallard) dangerous situation with Summer Spellman (Harriet Bibby)

However, Metro.co.uk understands that the scenes do not directly relate to Daniel, although we are sworn to secrecy over what the plotline entails.

A source told Metro.co.uk: ‘The teens will be centre stage in another hard hitting story which plays out next year.

‘New scenes at the school see Amy taking action but what is she making a stand over and who will it land in hot water?’

Daniel is currently spending time tutoring Summer but he is totally unaware that the schoolgirl has developed an intense crush on him.

Max Turner (Paddy Bever), who holds a grudge against Daniel, will get the wrong end of the stick and assume that Daniel is having an affair with Summer.

As he films footage of them together, looking close, Daniel will find himself facing a lot of questions – but will Summer speak out and tell the truth?

The teenage cast have been wowing of late with a series of strong storylines.

Amy was in the midst of a teenage pregnancy story not long ago while Harriet’s character Summer is facing a body image crisis which is tipped to lead into an eating disorder story.

Meanwhile, Alex Bain, who plays Simon, has played an intricate role in a drugs storyline and also the aftermath of the deaths of Oliver and then Natasha.

The young cast have shown their capabilities and are firmly part of the ensemble cast.

And it looks like this next storyline is going to be just as topical and intense.