Fiz Stape (played by Jennie McAlpine) asked Tyrone Dobbs (Alan Halsall) to move out of the house they share with their two daughters this week after he announced he was in love with Alina Pop (Ruxandra Porojnicu). And when Express.co.uk spoke to the actress who played Fiz, she discussed the possibility of not working alongside Alan and in Vera and Terry Duckworth’s famous terrace house, thus suggesting Fiz and Tyrone’s relationship is official over. According to next week’s spoilers, Coronation Street fan favourite Tyrone can’t stop thinking about Alina, will the two end up together if Fiz decides their relationship is not salvageable? To add to this, could Alina find herself pregnant with the mechanic’s baby?

In upcoming scenes of the ITV soap, Tyrone is morose and at Abi Franklin’s (Sally Carman) insistence, Kevin Webster (Michael Le Vell) takes him out for a pint.

Kevin does his best to cheer his colleague up, but when Maria Connor (Samia Longchambon) walks in and tears a strip off Tyrone for how he has treated Fiz, he is left stumbling for words.

Those watching at home will see Kevin jump in to defend Tyrone and is quick to point out Maria is no saint herself.

And after supporting his best mate, Kevin turns his attention to the pressing matter he has to deal with – Abi has asked him to tell Tyrone he has to move out.

With nowhere to go, Tyrone spots Alina across the Street at his mood perks up. 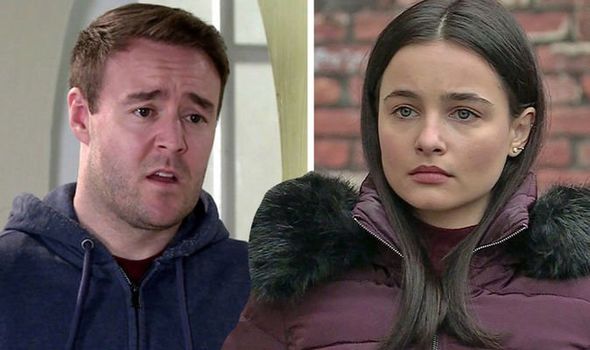 During the conversation, Tyrone will ask the beautiful whether she has any feelings for him, and viewers will see Alina invite him to her flat later that evening.

In the meantime, he calls at No.9 where he walks in on a tearful Hope asking Fiz why Daddy has left them and the mother is left fumbling for an excuse.

Tyrone explains the last thing he wants to do is cause the girls any upset and Fiz suggests he moves back in with them.

But she makes her position clear; she is not looking for a romantic reunion, instead, by him being at the house, she hopes it will give the girls some stability.

When Tyrone pops out later to go and see Alina, he explains how he is moving back in with Fiz on a temporary basis for the sake of the kids, but it’s her that he loves.

And when he unpacks his bags that evening, Tyrone is left wondering whether he’s made a terrible mistake. 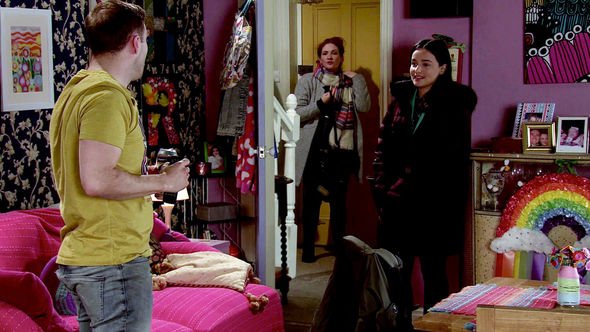 In a bid to get some sort of friendship established, Fiz books a counselling session for them with Toyah Battersby (Georgia Taylor) and Tyrone’s heart sinks.

In the Bistro, Toyah will do her best to conduct Fiz and Tyrone’s counselling session, and while Fiz thinks they have made progress, the minute Tyrone gets home, he slips upstairs to take a call from Alina.

It seems Alina and Tyrone are not slowing down any time soon and with the pair getting closer and closer, could Alina find herself pregnant with Tyrone’s baby?

Express.co.uk spoke to the actors involved in this storyline about what’s to come.

When asked whether she thinks Alina and Tyrone are a good match, Ruxandra, who plays Alina, said: “On the one hand, I believe they are because they are both good people and they both care about each other’s happiness, they are not selfish; on two occasions, for example, Alina is trying to stay away from Tyrone and not bring trouble to his life and Tyrone, on the other hand, always takes Alina’s side when people are picking on her.

“I think that’s very nice but on the other hand, Alina is very inexperienced when it comes to relationships and this might be a bit tricky because Tyrone is a family man and Alina could potentially become a stepmother, it might be a bit overwhelming for her in the future.

As for how Alina feels towards Fiz, the actress continued: “She does feel guilty, Fiz was there for her when she most needed and now she feels like she shouldn’t be bringing so much unhappiness to Fiz’s life.

“But, at the same time, she’s trying to stay away from Tyrone, when this doesn’t work out as it should and Fiz confronts Alina, then I think everything changes from Alina’s perspective, she realises that if she’s not going to stand up for herself, then she is going to be in a lot of trouble.”

As for Tyrone, it seems his feelings for Alina have completely blindsided him.

“I don’t think there’s any incentive from Tyrone, I don’t really think he sees it coming. I don’t think he thinks he’s got any chance with Alia, it just so happens that he has,” Alan explained.

“There’s no malice towards anyone, in Tyrone’s world, not just his relationship, I think he just wants everybody to e happy and everyone to get on really well.

“Clearly in a situation like this, that’s going to be very hard to do, but I think by this point, where he realises that he’s had his head turned, he’s got so caught up in all that, he doesn’t realise the damage that he’s doing,” Alana added.

Coronation Street airs Monday, Wednesday and Friday’s at 7.30pm and 8.30pm on ITV.