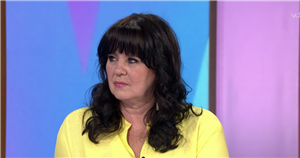 Loose Women's Coleen Nolan told viewers she is single and already mingling with other people.

On Tuesday's show the panel that included; Judi Love ,40, Ruth Langsford, 61, Janet Street-Porter, 74 and Coleen Nolan, 56 were busy discussing if there was too much pressure with trying to meet the one.

The conversation seemed to arrow to Coleen who coyly confirmed that she was "single again".

But it would seem she isn't about the dwell on it and revealed she is already speaking to "someone very lovely".

When speaking about how quickly their relationship developed due to Covid-19 restrictions.

She explained that once lockdown restrictions had eased slightly the new love birds realised that it just wasn't meant to be.

At which point her three co-stars cooed with excitement for their chum.

Coleen explained to viewers that she was more than content on her own after past relationships hadn't worked out.

Speaking about her former marriage to Eastenders actor Shane Richie, she added: "The nice thing for me having gone through two divorces I am really content on my own, you know I'm self-sufficient.

"So if the person isn't right then I'm not going to carry on speaking with them and that's ok."