The end of Grey’s Anatomy has been a popular topic in the past few years. For a show that recently kicked off its 17th season, those questions now come with the territory. But with the current season seeing its central hero, Meredith Grey, in and out of consciousness as she fights COVID — coupled with the returns of former stars Patrick Dempsey and T.R. Knight in her unconscious state — many fans have speculated that this very well could be the final chapter of Grey’s.

But not so fast. One of the last remaining OG Grey’s stars, Chandra Wilson, implies that is not the case.

“I know from a creative standpoint there have been many ‘This is how the season would end’ conversations and then they all end up [not happening] because of a myriad of reasons. Because the network’s not ready, the studio’s not ready, the fanbase isn’t ready, the numbers are too good, all of those things,” Wilson told ET’s Katie Krause. “Collectively, they’ve decided we’re not going to put an end on it. We’re just going to wait and see.”

“Especially in light of what’s happening right now, it’s like, do we want the last season to be about COVID? Or do we want us to be able to put some nice ribbons around it with rainbows and balloons and things?” she continued. “I know on the creative end the conversation comes up, but on our end, on the actor end, we’re like, look, whatever it is that you want us to do. Whatever life you see for these characters, as actors, we’re ready to bring that to life. So greater powers have those conversations than us.”

Wilson reunited with former co-star T.R. Knight in last week’s episode, where they were joined on the beach with Ellen Pompeo and James Pickens Jr. for a nostalgic, emotional reunion of members of the original cast. She recalled being “on watch alert” while filming the scene to ensure that the surprise stayed secret. 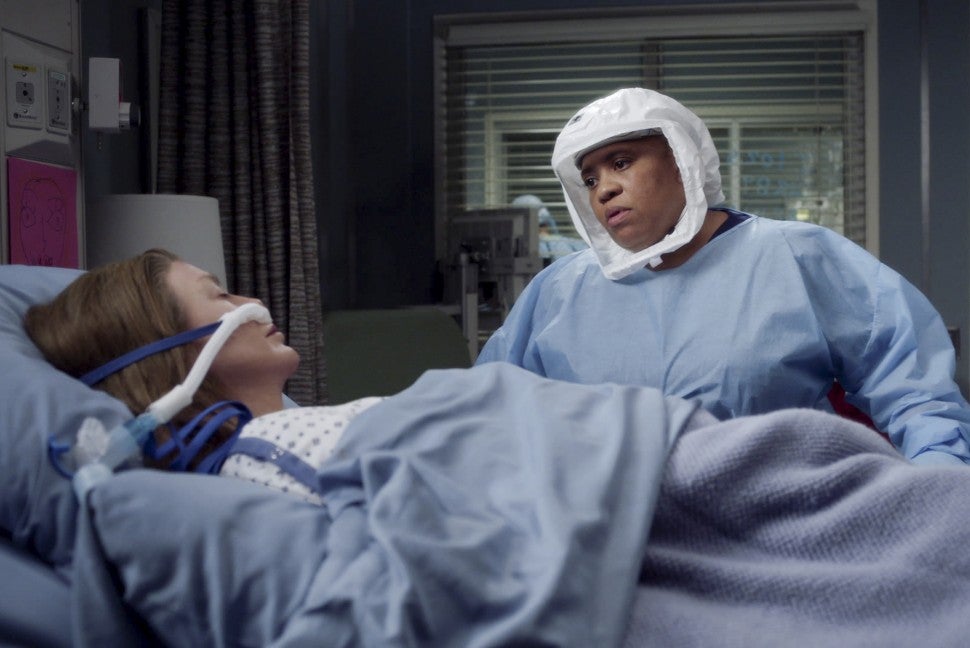 “It was like, protect the baby! Protect the baby!” Wilson recalled of the security measures they took on filming day. “We just really wanted it to be a surprise. We always keep in touch over the years and that relationship didn’t end because the character ended so it was having the baby back at home. That’s what I call everybody, but the baby got to be back at home and it was just as comfortable as it could be.”

When asked about what viewers can expect in the two upcoming episodes Dempsey is expected to reappear in, Wilson expertly skirted the question. “See that would imply that I would know what the story is. Why do you keep thinking that I know things?” Wilson joked, laughing at the secret-keeping. “Honest truth. I have no idea what our plans are.”

She does have her own selfish wishes for future returns. Whether they will come to fruition or is simply wishful thinking remains to be seen.

“I am notorious for saying all of the babies — dead or alive — to come back and spend time at home. That’s what it’s there for. All of the babies,” Wilson said. “I call them that because once I started directing in season 6, that’s what everybody felt like to me. My babies. I was taking care of these characters and just really thoughtful about what the experience is and what kind of experience they were having so that’s how they all feel to me. Bring ’em out of the grave, just bring ’em on!”

Wilson reflected on being one of the Grey’s OGs, alongside Pompeo and Pickens Jr., who have been with the medical drama since its inception in March 2005. The trio, she revealed, has a special handshake they do when they see each other on set.

“As an actor, you would love to be a starter and a finisher of a thing right? To have that kind of longevity. I know what that means to me,” Wilson said. “Grey’s has meant so much socially, it’s meant so much to our culture, to American culture, and globally, people relate to these characters and care about these characters. I love what we’ve been able to accomplish, as far as television’s concerned and what television looks like and what images are portrayed. I feel a great responsibility in knowing that we’re doing a good job with that so the historical context of us being around for as long as we have means the world to me. And the fact that our fanbase sticks with us and people started over with us and that folks that have been there since the beginning are now watching with their kids and watching them catch up, that is crazy town. That’s stuff that you don’t get [all the time], so I am incredibly honored at having been able to be a part of this… and that we ride the relevance wave as it goes along season after season.” 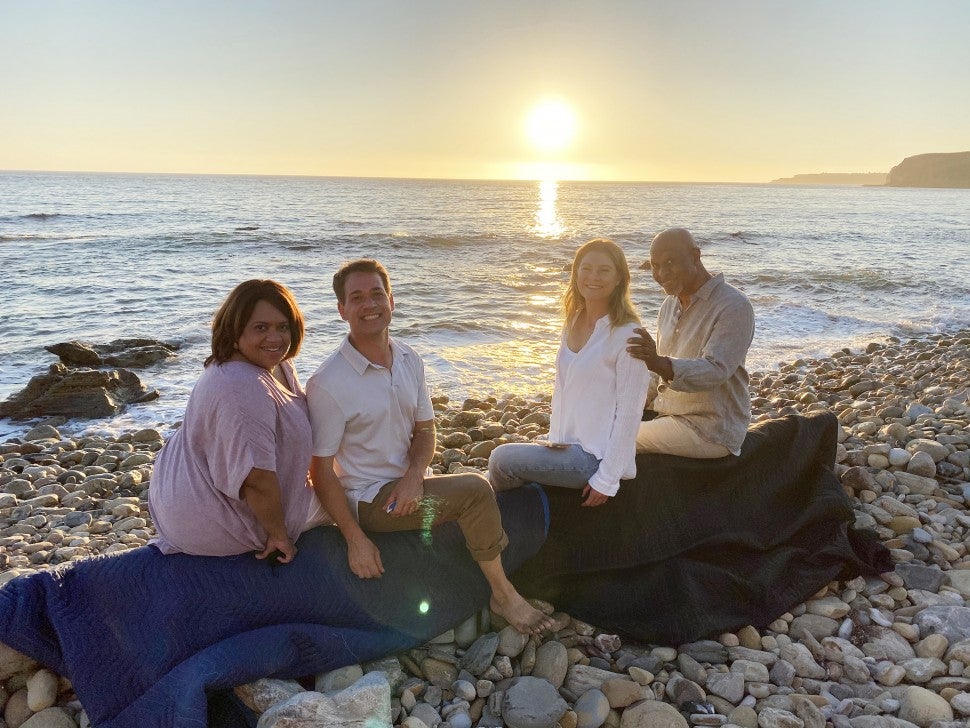 On Thursday’s episode, titled “Fight the Power,” Wilson’s Chief of Surgery Miranda Bailey is personally tested when her mother is wheeled in to Grey Sloan after having health issues amid a coronavirus spike.

“My mom, bless her heart, is having some breathing issues. I brought my parents to Seattle so they can be closer to me, trying to be a responsible daughter,” she previewed. “I thought a decent place for them to live but this is Seattle right at the beginning of the pandemic and nursing homes, nursing facilities, they were the first ones really, really hit. So we’re going to delve into what that is from a medical perspective.”

“One of the things that we’ve been able to do so far this year is talk about different perspectives of how people have been affected by this pandemic,” Wilson added. “We’ve had strangers, people that we don’t know, and this one is close to home. This one is a family member. We already have our babies there in the hospital with Meredith and Koracick. So this is another way that globally we’re being affected. I welcome the opportunity to be able to delve into that and to show that to people ’cause some people still don’t believe, after all this time, this is what our medical community is going through on a daily basis.”

“We were able to show, starting from the first episode, what was important to her was keeping her mental health on point. Ben, even though he comes in for the clap-out, he still is there to ground her so that she can do her job,” she continued. “We’ve been able to reveal, especially from Bailey’s point of view, that this pandemic is just getting bigger and bigger. That it’s not calming down at any point.”

Fifteen years into her time on Grey’s, Wilson still feels reinvigorated by the storytelling and her character.

“I learn new things about Bailey every script, continually. Even the fact that we’re able to see my mom in this next episode, this is only the third episode where she’s been able to be present. Even in the heart attack episode, I only spoke to her over the phone,” Wilson said. “There’s still something new, the story hasn’t gotten old. We’re not regurgitating anything. They continue to grow and that’s the thing I love the most about having been Bailey for so long.”

“When she started in that first episode and she was leading her ducklings around, in her head she thought she was Chief of Surgery. But we got the chance to see somebody who was a resident have a goal, achieve that goal and now she’s living the thing that she wanted from the very beginning. And probably in real time; you can do that in 15 years. So that’s what’s been really rewarding and what has also given inspiration to folks out there to go into medicine because they saw Miranda Bailey. Now they know that they can be a surgeon. I still get those kinds of letters and notes all the time.”

Grey’s Anatomy airs Thursdays at 9 p.m. ET/PT on ABC. For more on season 17, watch the video below.