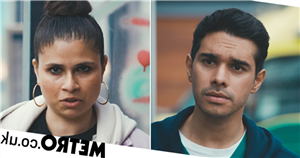 Recently in Casualty we met Hafsa (Zainab Hasan), the sister of Rash (Neet Mohan)’s old friend Sam. She told Rash she was a youth worker who was helping keep young people off the streets – but we had a glimpse that she wasn’t as nice as she was pretending to be.

When Hafsa turns up at Rash’s home in tonight’s episode, asking him to look after a young man she’s mentoring and saying that Rash is a role model, he reluctantly agrees to help out.

As he gets to know the boy a bit he decides to trust him. What Rash doesn’t know is that Hafsa and the boy are mixed up in gang violence – and they’re literally bringing trouble to his door. Will Rash realise what Hafsa is up to before he gets in too deep?

Charlie (Derek Thompson) recognises the son of a former patient, another person who’s found himself embroiled in Holby’s gang warfare. As one of the gangs seeks revenge on the other, the ED is suddenly on the front line of the violence.

Meanwhile, the search is on for a new clinical lead, as Dylan (William Beck) has very firmly decided that he doesn’t want the job permanently. The other candidates are Stevie (Elinor Lawless) and Ethan (George Rainsford), and we already know that Stevie has a vendetta against Ethan for a disastrous mistake he made when treating her sister after a car accident.

When Stevie very blatantly attempts to make Ethan look bad during a morbidity and mortality meeting, Dylan is puzzled.

The new series begins Saturday 8.45pm on BBC One. pic.twitter.com/ssSalGwZkI

Why would she do that? Is it just that she really, really wants the clinical lead job?

He’s is further concerned when he has to help Ethan out with a delicate procedure and discovers that Ethan’s Huntington’s isn’t as well controlled as we thought – and he begins to see that, for whatever reason, Stevie will use anything to get at Ethan, and get the clinical lead job for herself.

Sue Haasler is the author of five novels and the official BBC Holby City book, which you can read about here.