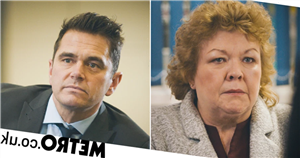 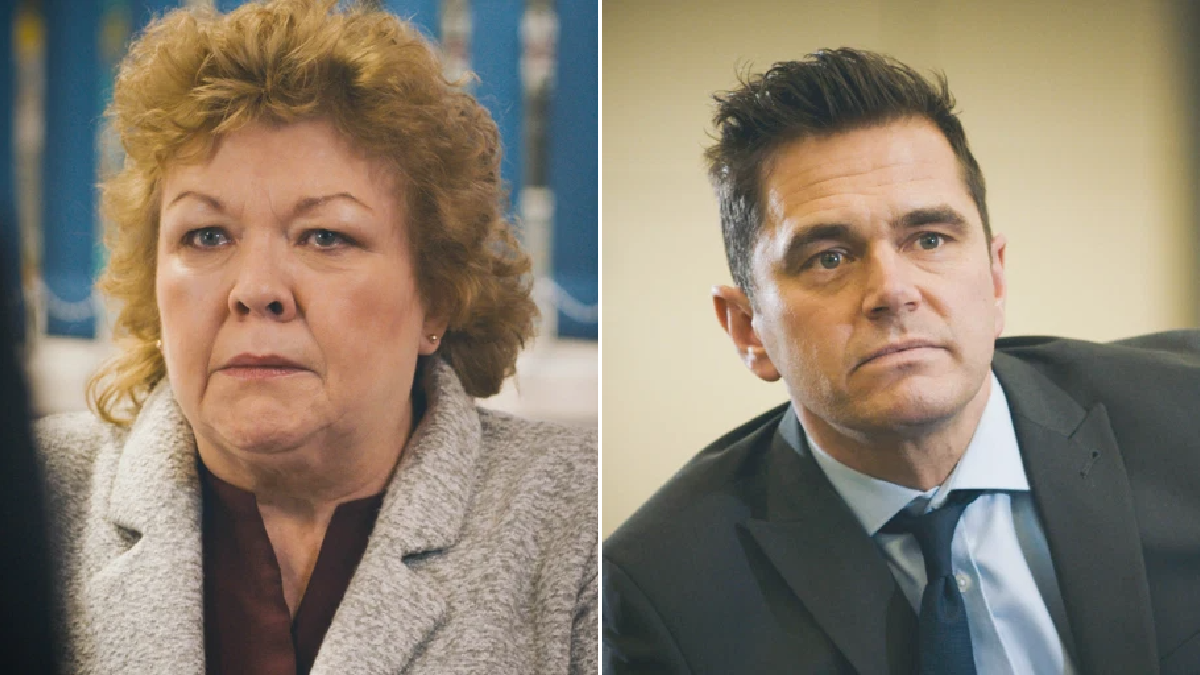 Jan (Di Botcher) had a massive decision to make in tonight’s Casualty – to protect her beloved wife Ffion (Stirling Gallacher) from further harm, should she go to the police and confess that she’s been supplying and smuggling drugs into Holby prison?

Despite Iain (Michael Stevenson)’s protestations that she could lost Ffion by confessing, Jan made her mind up – if she couldn’t tell Ffion the truth, she’d already lost her. She was ready to confess.

Iain was determined to protect his friend, so as Jan was going to the police, he was going to the prison, where he hatched a plan with Jan’s useless son Ross (Chris Gordon). Ross pretended to have a fit so he could be taken to the ED, where he would try to talk Jan out of her plan. This would have worked, but Iain told Ffion there was nothing wrong with Ross, and Jan worked out exactly what Ross and Iain were up to. Then she blurted out the whole story to a stunned Ffion.

Desite being angry and upset with Jan, it was Ffion (acting on Iain’s advice) who sorted everything out. She promised to get Ross transferred to another prison where he wouldn’t be in danger from the nasty people who were demanding the drugs, while Ross had to make a statement saying Jan had no involvement and the drugs were brought into the prison by drones.

All’s well that ends well, except when it doesn’t. Jan realised she couldn’t have anything to do with Ross ever again and she finally turned her back on her son. And her relationship with Ffion is by no means secure as Ffion’s trust in her has been badly shaken. Jan was left looking very alone.

But at least she has Iain, who applied for a paramedic job and got it. He hardly had stiff competition as he was up against Leon (Bobby Lockwood), who’s lovely and has learned a lot (and does have great hair) but up against a powerhouse of a candidate like Iain Dean he was always bound to come across as lacking in experience. So Leon has said farewell to his short stint as a Holby paramedic and is heading for a new job in London, organised by the ever helpful and possibly slightly guilty Iain.

Apart from Ross, who wasn’t ill at all, the other patient of the week was Keira (Heather Forster), who’d fallen through a glass roof while being pursued around her school by her head teacher. Keira came from a troubled background, a family of white supremacists who expected her to join in with the family hobbies of racism, hatred and self-inflicted tattoos. It wasn’t surprising that she’d chosen to secretly sleep in the school building instead of at home. Her mother was a nasty piece of work who managed to be abusive to several staff members.

While they all maintained a professional stance, it was left to Jade to speak plainly to Keira, telling her that racism is wrong. Jade is usually the sort to tell it like it is and she had even less patience than usual as she was having a difficult day.

Her hearing aids were broken in the incident where she was attacked and she’s having to rely on a speech recognition app. Her reaction to the attack obviously goes deeper than that, but so far she’s keeping it all to herself.

Fenisha is similarly hiding much of how she’s feeling following Ethan’s revelation about having the Huntington’s gene – but we can see that she’s worried.

Sue Haasler is the author of five novels and the official BBC Holby City book, which you can read about here.