Following a conversation he had with Cian about the latter’s crush on him, Cameron had been stressing over his feelings and whether he was finally ready to admit his secret.

Speaking to Lewis, he initially expressed frustration at letting himself get that way, stating: “It’s my own fault for not sorting out the situation before I came in.” 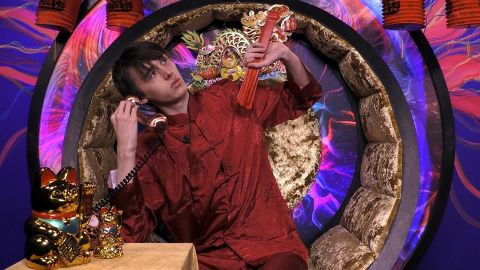 Lewis tried to reassure his friend that whatever he wanted to admit, he should only do it when he feels comfortable doing so.

Cameron replied: “The last four years I’ve been waiting to be ready but you’re never really ready… sometimes you gotta say ‘f**k it’ and just do it.”

Lewis said that if Cameron wanted to practice saying it out loud with him, he could, to which Cameron replied that if he was asked right there and then, he would say and it would be “definitive”.

“Are you gay?” Lewis asked, to which Cameron said: “Yes.”

Although he at first tried to hide under his hood, Lewis got Cameron to pull it down and give him a high five, telling his friend that he was proud of him for coming out.

Viewers at home also congratulated Cameron on his bravery, and praised Lewis for being a supportive friend:

Later on, on Big Brother’s Bit on the Side, Cameron’s father appeared in the audience and said that while the family knew about his sexuality, they also knew it was something he would tell them when he was ready.

Last night’s show also saw the eviction of the third housemate of the series, and the arrival of two more.