Big Brother has one fundamental rule that’s more important than all others, and housemates are now facing some very harsh consequences for breaking that rule. Again!

In Monday’s show (October 15), Lewis F openly speculated about who they thought would be nominated for eviction this week, which is a violation. When it was brought to their attention that they’d broken the rule, they decided to talk even more openly about nominations since they’d already messed up.

That was a huge mistake. When housemates woke in Tuesday’s episode (October 16), they discovered that their coffee and tea supply was gone — and so was all of the food they’d just won in the shopping task.

And we mean all of the food! The shelves in the storeroom were completely cleared out, with only porridge left behind. Akeem could barely contain his frustration, blurting out: “Oh my god, it’s all gone!”

Housemates were called together — immediately, they warned — by Big Brother for a meeting and finally told what was going on later that morning. It turns out it wasn’t just the nominations talk that got housemates in trouble! 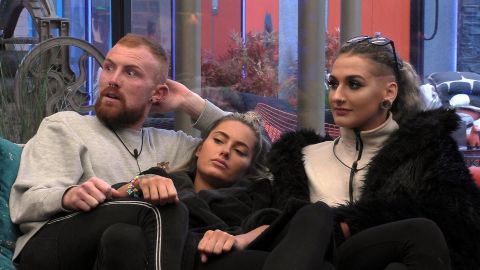 Ouch! Of course, because Big Brother viewers love to see the housemates suffer, they were enjoying every second of the old-school punishment:

As you can probably imagine, Cameron (aka Mr. Grumpy) was the most bothered by the disappearing food supply and went to the Diary Room to try to protest.

“I don’t like porridge,” he complained. “I can’t eat porridge. It makes me sick. I’m not eating it!”

That obviously worked and Big Brother restored full privileges to the house immediately. Just kidding… get used to that porridge and chickpeas, Cam!

Big Brother continues on Wednesday (October 17) at 10pm on Channel 5, followed by Bit on the Side at 11.05pm with Rylan Clark-Neal.