Ben, 46, and Ranvir Singh, 43, were on hand to host Good Morning Britain and spoke with Kate, 53, from her home. The latter announced her husband Derek Draper, 53, had been reunited with his family and was settling into their home after spending 12 months in hospital after contracting a rare case of coronavirus. The interview was emotional and once they’d ended the call with their ITV co-star, it was clear Ben had been on the brink of tears.

The presenter said: “As Kate said, she’s can’t share where Derek is [with his recovery]. He’s got a long, long way to go but this is a monumental step.”

Trying to compose himself, Ben tearfully said: “I remember sitting with her about a year ago and her telling me he had gone into hospital and what that felt like.

“And I just thought at the time, ‘It’s going to be fine’ and it hasn’t been. It’s been anything but fine,” he continued.

“Not just for Kate but for families up and down the country who have been through this and lived this as well.”

Ranvir added: “For him to have survived…so many people who got ill and didn’t survive and many people have had to have funerals for their loved ones because they got this ill. 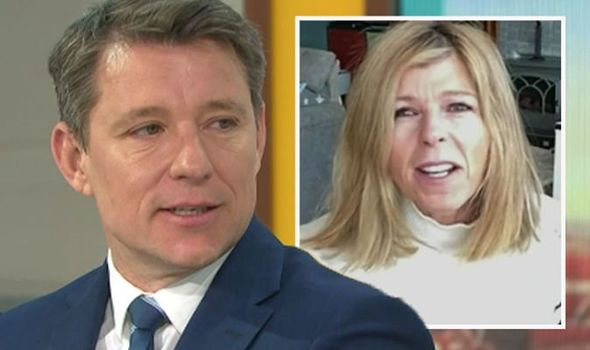 “The miracle is that Derek is with us after being this ill and to have survived this long and to now be home that is incredible,” Ranvir continued.

Taking to Twitter, those watching at home noticed the presenter was becoming emotional speaking about his friend’s heartbreak.

One viewer wrote: “Ben loves Kate so much. You can see how this has affected him too. He’s such a great friend to her #GMB.”

A second posted: “I wasn’t ready for that lovely @kategarraway update. Too many tears for a Friday morning but such a heartwarming story #GMB.”

It’s been anything but fine

The news broke overnight Derek had returned home but this was the first time Kate had spoken about it on television.

“Well, as you know, both of you, I think anybody whose husband or loved one has been in hospital for a long time, what you want is for them to be home,” the mother-of-two explained.

“That’s what you’re absolutely campaigning and wanting to happen. It’s been a lot of discussions.

“Even before Christmas about what is the best way to go, because it’s kind of balancing… it’s a very unique situation, Derek’s situation.”

“And whilst the doctors have made it very clear they wouldn’t allow him home if there was any risk to his health – I did say, ‘I’m not pushing you into something that’s not right?’,” Kate continued.

“And [the doctor] said, ‘Kate, you can’t push me,’ – but it was really looking at his cognition, looking at his consciousness and trying to think about what will be the best way to improve that.

“You saw in the documentary, there have been improvements in autumn, he’s using more words, and there are more things that he can do now.

“He’s got some more movement in his hands, he can show emotion. But it felt as though everything had stalled medically and if anything was going slightly back.”

Kate added: “Obviously within the very necessary Covid restrictions that are in place, I couldn’t visit, the family couldn’t visit, even some of the therapeutic things we would want to do to help him move forward couldn’t happen.

“So taking all that into account, they said, ‘Right let’s give this a go, let’s get him home safely.

“So it does feel a little bit like the hospital has come home with me at the moment, as we’ve got all sorts of professional people making sure everything is safe and then see how being in the family environment could help.