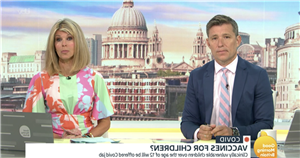 The 46-year-old TV presenter spotted that his co-star Kate Garrway had not been called by the correct name.

During the discussion, Victoria had accidentally referred to Kate, as "Fiona".

Ben said: "I call Kate many things but she's definitely not Fiona and I know you've had a busy morning."

Soon after, things turned heated between Ben and the MP after he challenged the necessity of the use of the government's Track and Trace app.

Victoria Atkins had seemingly failed to answer Ben's question and he hit back telling her "you're ignoring my question".

GMB seemed to suffer a series of mishaps on Wednesday's show, including one guest swearing on the programme and weather girl Laura Tobin stealing the limelight of the Foreign Secretary Lisa Nandy.

The meteorologist had teamed up with a duck for her live segment on the show.

As her time concluded, she asked Ben and Kate: "Would you like to know and interesting fact of how you can tell the difference between a male and a female?"

Kate responded: "I absolutely would."

But Laura carried on anyway, unknowingly cutting across the Foreign Secretary as she explained that a "quack-quack" was female and "wuack-wuack" was male.

While laughing, Kate warned: "I don't believe that at all and we have the Shadow Foreign Secretary waiting so that's nothing new Laura.