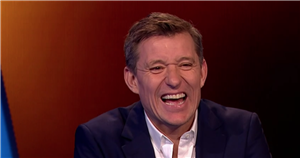 On Saturday's episode of Tipping Point Lucky Stars, funnyman Jason Manford made sure he entertained viewers when he made a rather surprising joke which involved his gran's underwear.

The Scarborough actor made sure he showed his comedic side while introducing himself on the show and informing presenter Ben Shephard that his gran is also a big fan of the show.

As he divulged further he asked Ben if he could also sign his nan's knickers – which made the presenter blush.

But the jokes didn't stop there, as Jason also bought out a pair of rather large mint green coloured knickers.

Making everyone in the studio laugh, the comedian insisted that the briefs were clean.

Presenter Ben couldn't help but see the funny side and laughed at Ben's humorous gag.

But although Jason answered quite a few of his questions correctly, he couldn't seem to get counters to drop from the machine.

As a result, despite his best efforts, Jason was booted off of the first round.

But this didn't seem to stop magician's assistant Debbie, as she had a cracking time on the show and managed to battle off her competitors to make it to the final round.