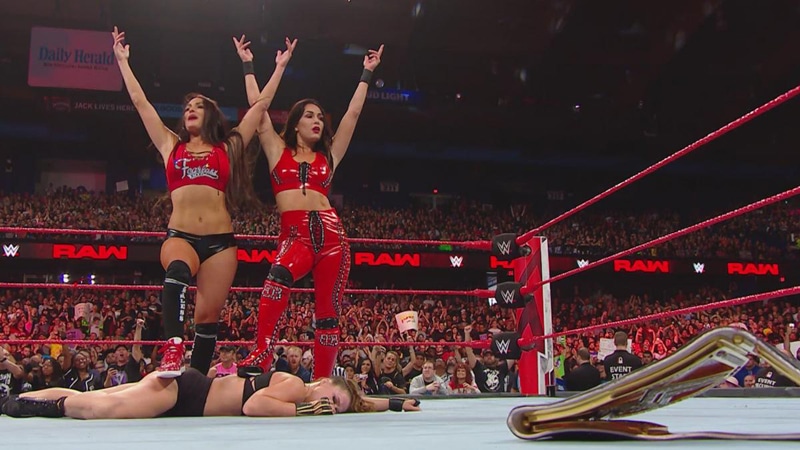 There had been rumors for weeks now that the WWE was planning on having Ronda Rousey defend her Raw women’s title against Nikki Bella at WWE Evolution.

Ronda Rousey won the match for her team by making Ruby Riott submit to her armbar and she stood with the Bella Twins celebrating her win. Then, out of nowhere, the Bella Twins attacked Rousey and beat her down.

It started with a Nikki Bella forearm to the back of Rousey’s head and then the Bella Twins executed a brutal two-on-one beatdown. Ronda Rousey tried to regain her feet but the numbers game got to her and the beatdown culminated in her lying prone on the mat.

When it ended, Nikki Bella and Brie Bella each placed a foot on Rousey’s back and posed to the boos of the crowd.

It was shocking but at the same time, it made sense. While Brie Bella has worked as a face on SmackDown Live with her husband Daniel Bryan, Nikki Bella has always been better as a heel.

While the smart idea is to keep Brie Bella off SmackDown Live now, since her husband is still a massive babyface, having Nikki Bella as a heel gives the WWE Evolution the main event that will bring in more eyes.

Now, Nikki Bella is in no way the best person for this spot, but she is much better than Brie Bella in the ring and was a great heel at the end of her run before the Women’s Revolution started.

With Ruby Riott losing twice to Ronda Rousey in two days and Natalya not yet ready to turn on her friend, Nikki Bella was the best bet for this role at WWE Evolution.