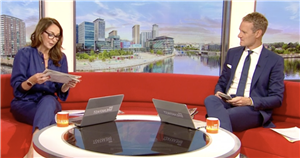 Sally Nugent wasn't having any of Dan Walker's antics on Tuesday's instalment of BBC Breakfast, after he branded her 'clueless' during a DIY discussion.

The co-hosts had gathered on the red sofa as usual to discuss the issues of the day, looking through various newspapers and discussing the headlines.

The conversation soon turned to DIY in the home, as Dan asked Sally: "What are you like at DIY?"

Sally wasn't holding back as she responded: "What? What do you think I'm like at DIY? Dreadful."

In an attempt to compliment his co-host, Dan told her: "You've got hidden depths!" – though Sally insisted: "That's not my area of talent. I'm pretty rubbish.

"There's always something not quite straight, or a little bit of something hanging. The odd wonky shelf."

But Dan was soon eating his earlier compliments, as he began to read an article aloud: "Some of us are clueless – sorry about that, Sal!"

Thankfully Sally took it all in good humour, as the hosts shared a giggle together – but, as Dan read out a list of six DIY staples to see if Sally would be able to carry them out, she soon scolded him for his behaviour.

The list included rewiring a three-pin plug, patching a hole in the wall, and changing the oil in a car.

"Would you put up a shelf?" Dan wondered, as Sally responded: "No. I don't think I would use a drill."

Her co-host asked: "Have you ever used a drill?"

Sally admitted that she would "definitely" be able to unclog a sink in her house, could change a lightbulb, and already had experience with patching holes in walls.

Dan, meanwhile, said he could do everything except drain the oil from his car.

And Dan couldn't quite resist a cheeky bedroom-based quip at that, as he told her: "Well, I've got a bedroom that needs a bit of that, thank you!"

A clearly flustered Sally quickly put an end to his train of thought, as she scolded: "Let's move on, shall we?"

Fans were left in hysterics at the exchange, as one even turned to Twitter to beg for Sally's permanent instalment on the red sofa after Louise Minchin leaves the show in September.

One tweet read: "Sally Nugent has to be the next permanent presenter of @BBCBreakfast. The pairing with @MrDanWalker just clicks. Love them!"