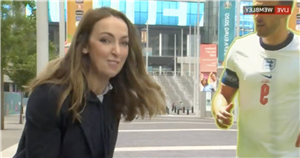 The brunette beauty was presenting a sporting segment outside Wembley Stadium after England's epic win against Germany in the Euros, alongside two cardboard cutouts.

With a cutout of footie ace Raheem Sterling closest to her, and Harry Kane's likeness on her other side, Sally was busy showing the front page of The Mirror to the audience at home when Raheem's cutout fell over.

Propelled by the wind, the cutout brushed Sally before falling to the floor, causing her to shout: "Oh!"

"Bear with me!" Sally said as she bent to pick the fallen footballer over. "Raheem's just taken a tumble – I hope we haven't hurt him!"

And things only got worse from there, as the incident caused Sally's microphone to cut out.

Back in the studio, Dan Walker and Louise Minchin had to quickly cut in to salvage the situation, with Dan telling Sally: "Oh no, your microphone! Sal, if you can hear us-"

Louise chipped in: "Something's happened to your microphone."

"Raheem has de-mic'ed you," Dan explained, while his co-star quickly quipped: "All we can do is hope that [the match] goes a lot better than that!"

"What you need to know, is that Raheem Sterling scored last night, and Harry Kane got the second goal for England," Dan explained.

"I know!" an irate Louise scolded him.

"I'm just conversing with our lovely viewers!" Dan insisted with a grin, as Louise continued: "What I'm wondering is how many other cardboard cutouts we have, just in case."

And soon, Dan was able to explain just what had happened to Sally's recording equipment, as he said: "The battery's gone in Sally's microphone."

"Raheem is okay now!" Louise finally announced, with Dan echoing: "He's back up!"

"Have we fixed it?" Louise wondered as Sally appeared back on-screen.

"Let's try again," Sally herself could finally be heard saying. "Harry's okay. Raheem is being held up at the moment so let's just hope that the wind doesn't get up again here!"

Later, Sally revealed just how Raheem was staying so nice and "stable" – as BBC Breakfast producer Charlye was kneeling behind him, holding the cutout steady.

Charlye gave the camera a cheeky wave as Louise and Dan could be heard sharing a giggle in the studio.

"That's above and beyond! Give that girl a pay rise!" Louise joked.

And viewers were quick to share their own reactions to the chaos on Twitter, with one posting: "The hilarity continues!"

"Love the BBC Breakfast with Sally. First the Raheem cut out falls down then her mike goes!" another giggled.

One responded to the "secret" of the cutout's stability being revealed on-camera, commenting: "A good magician never reveals the trick, Sally! They'll be kicking you out of the Journalist's Circle for that! #BBCBreakfast."