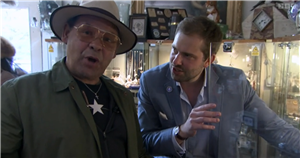 But it didn’t take long before things turned sour between Craig and Tim, after the antiques pro called him out for loudly playing music with a vintage trumpet in the store.

As the pro dealer showed the actor where the silver-plated instrument was wearing away, Craig immediately picked up the trumpet and started playing it loudly and out of tune in the quiet humble antiques show.

It was at this point that Tim swiftly took the hundred-year-old object from his hands and carefully placed it back in the glass cabinet.

He could be heard muttering: “Let’s pop it back for the moment, we’ve only just got here Craig, we need to [focus].”

The actor quickly hit back with: “Alright, calm down, calm down” as he chuckled to himself before pulling a face to the camera and walking off.

Later on in the episode the doubtful double act found difficulty in the auction room as they struggled to see their buried treasures soar with the buyers.

As his co-star Robert made a staggering profit, Craig lost £130 as he jokingly jibbed: “Your career is in tatters, it’s over before it began.”

After admitting defeat to Robert and Izzy, the group lovingly exchanged hugs but Craig was quick to refuse to his antique expert after they failed to win the weekend-long shopping trip.

He jokingly settled for a handshake after he added: “I’m not hugging you” before the pair burst into laughter.