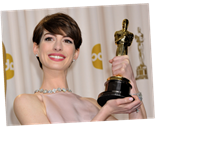 It was nearly eight years ago when Anne Hathaway swept awards season with her performance as Fantine in Tom Hooper’s “Les Misérables,” which won Hathaway the Best Supporting Actress prizes at the BAFTAS, SAG Awards, Golden Globes, and Academy Awards. The actress became a target of internet backlash throughout awards season, which intensified after her Oscar win. In a 2014 appearance on “Ellen,” Hathaway revealed she googled herself after the Oscars and discovered an article titled, “Why does everyone hate Anne Hathaway?”

With eight years of growth behind her since Oscar night, Hathaway told The Sun this month that she chooses to see the positives that emerged from being the subject of extreme internet hate. The actress said the backlash forced her to build self-confidence that might not have been built otherwise.

“I really don’t want to dredge up the past but I did have my monster out there, I did have the internet turn on me and hate me and it was like a whole big thing,” Hathaway said. “And it was a really good thing for me personally. You can be incredibly empowered because of those things. So I guess what I’d say is when the bad shit happens, don’t fear it — just go with it, flow with it.”

Speaking to Harper’s Bazaar in 2014, Hathaway said the backlash she faced after the Oscars made it feel like she “got punched in the gut.” The actress added she was left “shocked” and “embarrassed” by the hatred at the time, going so far as adding, “Even now I can feel the shame.”

“People treated me a certain way. But I’ve grown from it,” Hathaway said at the time. “This whole thing has made me a way more compassionate and loving person. And I don’t feel sorry for myself.”

Hathaway starred as Catwoman in Christopher Nolan’s “The Dark Knight Rises” in the same year as “Les Misérables,” and she followed up the musical adaptation by reuniting with Nolan for the space epic “Interstellar.” Hathaway’s recent credits include two HBO Max streaming titles: “The Witches,” which debuted last October, and “Locked Down,” which premiered this month and was shot in 2020 under strict pandemic safety guidelines.