Alastair Campbell and Susanna Reid are presenting Good Morning Britain from today until Wednesday and before the show got officially underway, the former official spokesman of Tony Blair explained how he had a strict set of guidelines to follow while sitting in Piers Morgan’s former chair. And Susanna was keen to find out exactly what he could and couldn’t say on the show.

“I was interested to know, Alastair, that part of your briefing was that you had been issued with the Ofcom banned words list,” Susanna began.

“I’m not going to say them, am I?” He replied and she continued: “Boris was not on it.”

“Boris was not on it, no,” Alastair remarked and Susanna added: “The trouble is, that is where the discussion must end because I’m not sure we can discuss the Ofcom banned words.”

“Some of them, I didn’t know existed! I might publish it later,” the journalist joked. 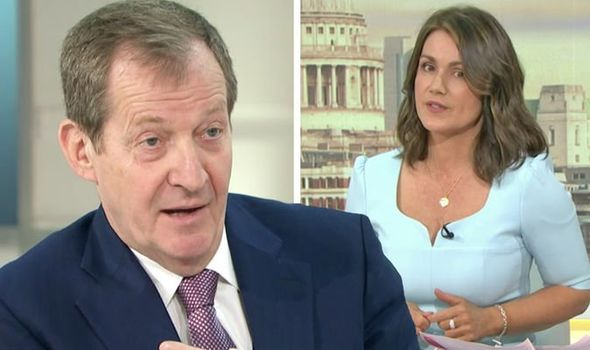 Those watching at home heard Susanna say: “I have never been issued the Ofcom banned words.”

And Richard Arnold interjected: “Clearly I haven’t – ever.”

“I think they were worried I’d go all mouth and tucker on you Susanna, which I promise I won’t,” Alastair reassured. “That’s on the category three list.”

As for how GMB viewers responded to Alastair sitting in the presenting hot seat, it seems they were divided.

Taking to Twitter to comment, one said: “Not sure that @campbellclaret is entirely suited to this @GMB temporary position. Great interviewee, not so interviewer. #GMB.”

“I hope Alistair Campbell isn’t going to be a permanent fixture on #GMB. Absolutely no personality. I’d rather have #piersmorgan back and I couldn’t stand him either,” someone else remarked.

A third added: “Can’t wait to see who they have in that presenters chair next week. Campbell is a ‘No’ from me. #GMB.”

“@GMB @susannareid100 and @campbellclaret Uncomfortable viewing this morning with Alistair Campbell.  Think I shall be switching over already,” a tweet read.

One other viewer added: “Alistair Campbell just turned the milk sour on my cereal. Smile a little bit man. #GMB.”

However, some enjoyed the change Alastair brought to the show.

Someone else mentioned: “#gmb I’m probably in a minority here but quite enjoying  Mr Campbell on GMB this morning.”