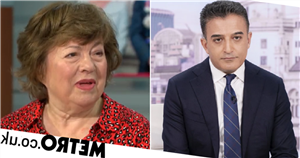 It’s been confirmed that Harry and Meghan touched down in the UK on Wednesday with their two children, Archie and Lillibet, to join in with the festivities.

Angela, however, believes the royal couple ‘should be ashamed of themselves’ and reckons they only tagged onto the celebrations to boost their Netflix career.

The head-to-head kicked off when Adil asked why the Queen wouldn’t want her entire family reunited for the special occasion.

‘Who are we to deny that?’ he quizzed, with Angela swiftly firing back.

‘I am a really keen monarchist, but I think that is badly timed,’ she said. 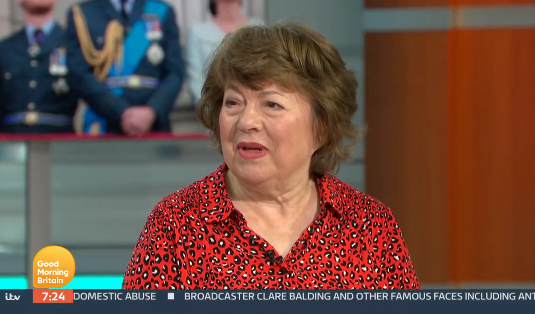 ‘Harry and Megan shouldn’t come because there could be more pressure on the Queen, she’s got a very hard four days.’

Adil was confused by Angela’s statement and pointed out that the Queen would have welcomed Meghan and Harry. ‘So I don’t know what pressure she’d be under,’ he said.

‘No, because she’s not very well,’ Angela retorted. ‘She’s got mobility problems and I think that for someone of her age to have four full days one after the other…’

‘I don’t think they’ve forced themselves, they haven’t said “we are coming no matter what”,’ Adil replied. ‘They’ve been invited, they’ve been given full security so the Queen has endorsed it.

‘So how in any way is going to be bad for the Queen?’

At this point, Angela doubled down on her stance and slammed: ‘I think that people who don’t want them to come would agree with me that their behaviour has been appalling and therefore they should be ashamed and they should not come at this time and try to grab a few shots that will help them with their Netflix career.’

‘It’s ridiculous to say it will put pressure on the Queen to have Harry and Meghan to be here,’ she said.

‘The Queen invited them! It was a magnanimous gesture!’

Viewers couldn’t believe what was coming out of Angela’s mouth and blasted her remarks as ‘nonsense’ on social media.

‘Made zero sense,’ one slammed. ‘It’s like talking to a brick wall. They’ve got this opinion of Meghan and won’t deviate even when they’re proved wrong.’

Echoing a similar sentiment, another fumed: ‘What a load of nonsense. The Queen invited them so how on earth is that putting pressure on herself… Angela Levin properly hates Harry & Meghan so it’s great to see her fuming that they are going.’

Harry and Meghan will not appear alongside the Queen on the royal balcony for the Trooping the Colour today.

The line-up has been limited to working members of the royal family only, meaning Prince Andrew will also miss out.

Buckingham Palace said the decision to only include working royals was taken ‘after careful consideration’.

Taking place from Thursday, June 2, to Sunday, June 5, the celebrations mark Her Majesty’s record-breaking 70th year on the throne.

Across the UK, there will be street parties, concerts, and other special events attended by the Queen and senior members of the Royal Family.