This opening is usually where a disclaimer goes. For a series like “A Friend of the Family,” one that dramatizes the events behind a story that came to public attention through an acclaimed (or at least widely-seen) documentary, it’s almost second nature now to start off any discussion with a acknowledgment that many of the details are an open matter. Anyone who wants to know the story beforehand (particularly those who might want to avoid certain subject matter the story addresses) can easily find a concise summary with a few clicks.

Creators will go to great lengths to try to preserve a certain kind of viewing experience, one with twists unspoiled and jarring turns hidden. Amidst a sea of real-life stories of manipulation and grief and predation being turned into TV series, “A Friend of the Family” is one that stands out because it’s not constructed in that way. In telling the story of Jan Broberg and her family’s attempts to undo the damage wrought by someone they trusted, this Peacock series takes an approach to a TV adaptation that (refreshingly) has little concern for true-crime expectations.

That approach is rooted in the opening episode of the nine-part season — directed by Eliza Hittman and written by series creator Nick Antosca — which lays out the fraught interfamily dynamic between the Brobergs and Berchtolds. A church friendship leads to a gradual but strong psychological connection between the parents: Mary Ann (Anna Paquin) and Bob Broberg (Colin Hanks) see B (Jake Lacy) and Gail (Lio Tipton) as trusted, welcoming members of the LDS community and their Pocatello, Idaho neighborhood at large. Over time, B’s sugar-coated attention to all members of the Broberg family begins to decay as his attempts to ingratiate himself become more and more insistent.

If there’s a shock that comes with B escalating rides home and manufactured hangouts into kidnapping Jan (played at different ages by Hendrix Yancey and Mckenna Grace), “A Friend of the Family” doesn’t sensationalize it. There aren’t really any artificial, sinister stings underneath Lacy’s performance, no ironic judgment passed as these two families try to create an idyllic early-‘70s life for the multiple children on each side. The foundation being laid is not to expect what comes next (though those who have seen Skye Borgman’s documentary “Abducted in Plain Sight” have an idea of what later episodes might address), but to understand the complicated psychological ground that the rest of the series builds on. 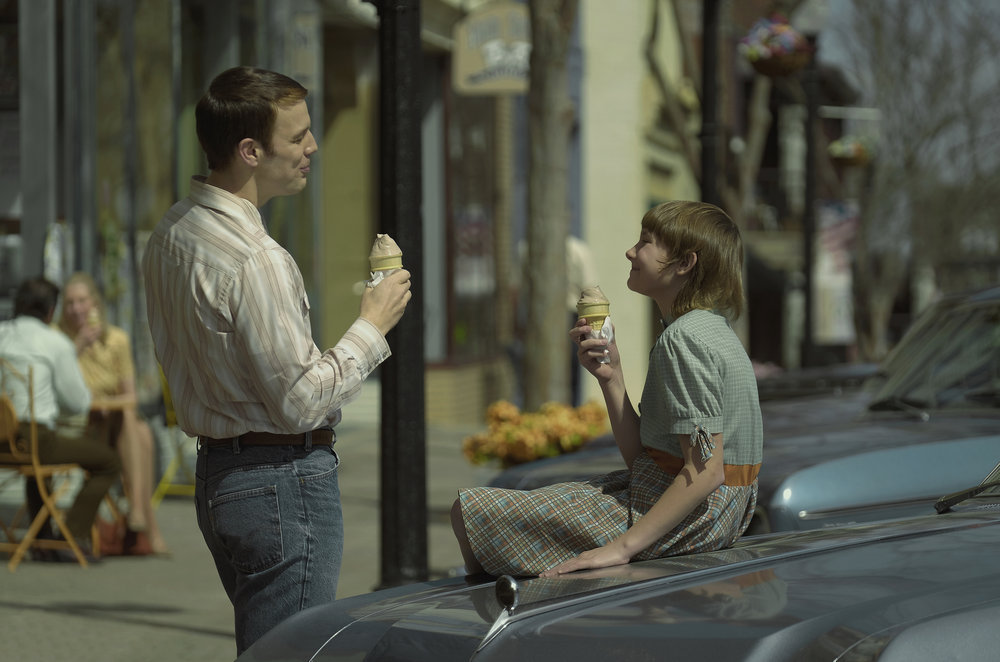 Jake Lacy and Hendrix Yancey in “A Friend of the Family”

Much of what comes after is an ongoing negotiation between the adults involved. There’s manipulation of feelings, of trust, and of fear that any one false move could lead to irreparable harm. Paquin is the main example of how these performers play each self-rationalizing step of their characters’ decision-making processes in small beats, eerie and effective in changing in tiny shades. Through Bob trying to assert the control over his family’s safety, Hanks is most devastating in playing someone who realizes that he’s not only been caught in a trap, he’s been an unwitting accomplice. And Tipton is fantastic here, bringing some resolve to someone trying to convince herself that what she’s doing (and how she’s conveying her husband’s secret messages secondhand) is part of a greater, helpful plan.

B’s actions do become the catalyst for the worst parts of the Broberg family’s ordeal and a lot of “A Friend of the Family” is driven by every new way he finds to emotionally swindle them. But “A Friend of the Family” also makes the important distinction that this is not his story (something that would be evident even if Jan Broberg didn’t personally introduce the series herself). It charts the various ways B’s able to get past everyone’s emotional and physical defenses, mainly through looking at what his victims are left with. It would be easy to gawk at a family (as one character does in the series’ fourth episode) for their willingness to trust a child with someone who would say or do the things that B is shown to do before and after the kidnapping. What this series and Lacy’s performance do have is an unusually high level of patience, creating an atmosphere where even if someone can’t fully understand the Broberg’s actions, it’s a lot easier to empathize with their starting point.

Part of that comes from “A Friend of the Family” choosing not to make this story a referendum on their faith and instead making it more a window into how one person can manipulate the trust that comes from a close-knit community. It spares the Brobergs and, to a certain extent B’s family, from condescension. The closest the show comes to painting B as an outright monster is showing all the people who worked around their personal objections in order to do what helped get B what he wanted.

“A Friend of the Family” is honed in on perspective here in other ways. It doesn’t take long for Hittman to put the audience right in Jan’s eyes, seeing how she takes in a room. The handful of times the show returns to that point of view says just as much about what changes for her and her family without even realizing it. It starts out in that first episode as a Wonder Bread/Partridge Family ideal, complete with the faint amber glaze the decade often gets in retrospect. (Ariel Marx, who also provided the music for the Antosca-produced “Candy” earlier this year, delivers another hypnotic score that locates the unease underneath a sparkling exterior.) As that smiling family public image gets punctured by tiny pinpricks, that crystal-clear field of vision starts to get more hazy. The more that the Brobergs start to question what forces are guiding their daughter, the more that everything around her starts to blur for those watching, too.

The time period certainly helps in creating at atmosphere of innocence and plausible deniability. It’s not just the Brobergs who are often at a loss for the language to put into words the kind of manipulative personality they’re dealing with. “A Friend of the Family” slow-builds a community atmosphere where the daily give and take of implicit trust is the rule, not the exception. Realizing that B is meticulously using the desire to keep up that facade and not risk losing an idealized vision of human nature is one of the sharpest ways that “A Friend of the Family” makes this more about motivation than sensation. 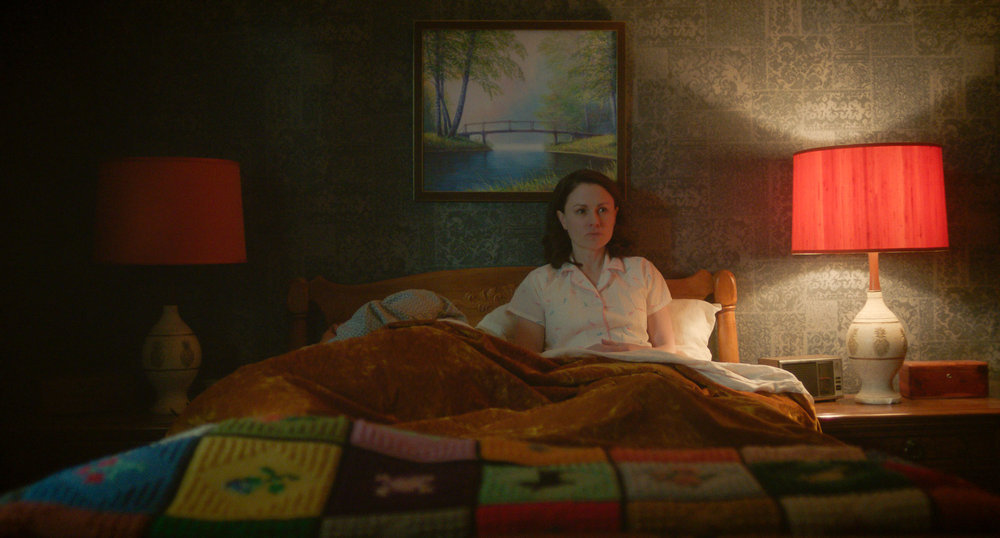 Anna Paquin in “A Friend of the Family”

For most of its runtime, the horror in “A Friend of a Family” is through suggestion. It’s the terror of never really knowing what happened to someone you love because they refuse to speak about it. The show is trying to capture a specific perspective on an experience that many will likely find at least some kernel of truth to which to relate. The same attempt to approach the unthinkable with reason and calm that put the Brobergs at a disadvantage in the legal system and in their interactions with B ends up being the best way to understand what happened, even a half-century later.

There’ll certainly be conversations about how this story is paced. Particularly when compared against a film that covered major points on the timeline in 91 minutes, it will be easy for some to argue that nine episodes is an overindulgent canvas. To the extent that “A Friend of the Family” is repetitive, that’s not entirely untrue. B is a character whose single-minded goals don’t allow for much change past a certain point, except for maybe who his chosen target is.

But it’s also helpful to keep in mind that this is not a show designed to be talked about in all caps. It is meticulous, to a very specific end and with a particular goal. As something that slot right into a subgenre’s content-hungry ecosystem, “A Friend of the Family” is refreshingly unsuccessful. By prizing clarity over shock, it’s an admirable adjustment for what we expect from stories like it.

The first four episodes of “A Friend of the Family” are now available to stream on Peacock. Additional episodes will premiere on Thursdays through November 10.