‘A Christmas Story Christmas’ Review: Another Forgettable Entry in the Holiday Sequel Annals

When Bob Clark’s “A Christmas Story” hit theaters the week before Thanksgiving 1983, no one could have foreseen the cultural impact the family comedy would have on the holiday film canon. A modest box office showing (it took in $2 million its first week and failed to crack $20 million during its full run), mixed reviews, and some awards attention from Canada’s Genie Awards added up to a hazy picture of a film that was good enough but hardly a game-changer. Later, of course, came the television airings, landing the film in near-constant rotation during the holiday season and turning it into an unexpected holiday favorite. Familiarity, it seems, didn’t breed contempt when it came to this TNT and TBS staple; it only inspired outright adoration.

Nearly 40 years after the film’s initial release — and just in time to capitalize on those same TV showings that will carry it through the next six weeks — comes the inevitable: a sequel. There’s certainly fertile ground to cover here, as both Clay Kaytis’ clunkily titled “A Christmas Story Christmas” and its predecessor were inspired by Jean Shepherd’s sprawling “Parker Family Saga,” based on the author’s own stories, which in turn led to books, radio plays, movies (including “A Christmas Story 2,” which does not exist in this new timeline), and much more.

And yet, despite the apparent warmth with which Kaytis, co-screenwriter Nick Schenk, and returning star and co-writer Peter Billingsley approach the material, whatever magic propelled the original to holiday film canon glory is sorely lacking. Also lacking: availability. Thanks to the magic of contractual agreements, the streaming-only feature will likely never appear in rotation on the same cable channels that made the original such a hit. Instead, it will exist as a curiosity only available to the HBO Max subscriber faithful and the Parker family super-fans who seek it out. Forgettable in execution and convoluted in availability? It’s enough to make a fan want to shoot their eye out.

Set in the ’70s, “A Christmas Story Christmas” finds our hero Ralphie (Billingsley) taking on the role of patriarch of the Parker family. He’s a husband and father, a struggling writer, and things are challenging even before he gets some heartbreaking news: his father (aka The Old Man) passed away just days before Christmas. Suddenly, making the holiday bright isn’t just an ideal to strive for; it’s the only thing that can cheer up his heartbroken family, particularly his beloved mother (Julie Hagerty, replacing original star Melinda Dillon, who retired over a decade ago). 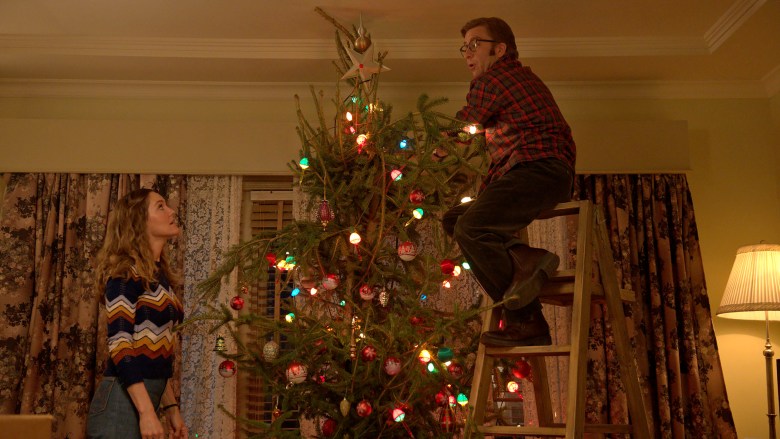 Soon enough, Ralph, wife Sandy (Erinn Hayes, who has great chemistry with everyone, especially Hagerty), and cute kids Mark (River Drosche) and Julie (Julianna Layne) are hightailing it out of their avocado-green Chicago apartment to head home to Hohman, Indiana, to have the kind of Christmas the Parkers have made their bread and butter. That means folksy anecdotes about Midwest living, kids obsessing over essential presents, and salivating over the sparkling windows of local department store Higbee’s. Lies about Santa are told, casseroles are consumed, and a genial tone reigns supreme, even if it is often deflated by increasingly convoluted storylines and a fairly understandable interest in stuffing the film with winks and nods to the original.

And, yes, nods to the first film run the gamut, from the eye-rollingly obvious (Ralph tries to sweeten up a potential publisher with a holiday gift, just as he did with his teacher so many years ago) to the genuinely fun (the Parkers’ neighbors, the Bumpus clan, continue to offer a home for a large pack of carousing dogs, with a snuggly addition). Billingsley is joined by a cadre of other returning stars, like his old pals Flick (Scott Schwartz) and Schwartz (R.D. Robb), his little brother Randy (Ian Petrella), and forever nemesis Scut Farkus (Zack Ward), which adds some sparkle to the entire outing.

Inevitably, many lessons are learned (are Ralph and Sandy coddling their kids? do bullies ever change? is a “triple dog dare” really the worst thing you can be challenged with?), and mistakes are met with both laughs and understanding. The Old Man is retconned into being the biggest, best champion of Christmas in the entire world, a bastion of holiday cheer and happiness, a glossy take on a lovingly curmudgeonly character, and one that totally misses the point of his appeal.

No one tries to assemble a leg lamp. One person does nearly get their eye shot out. A kid pukes on Santa. Play the hits! 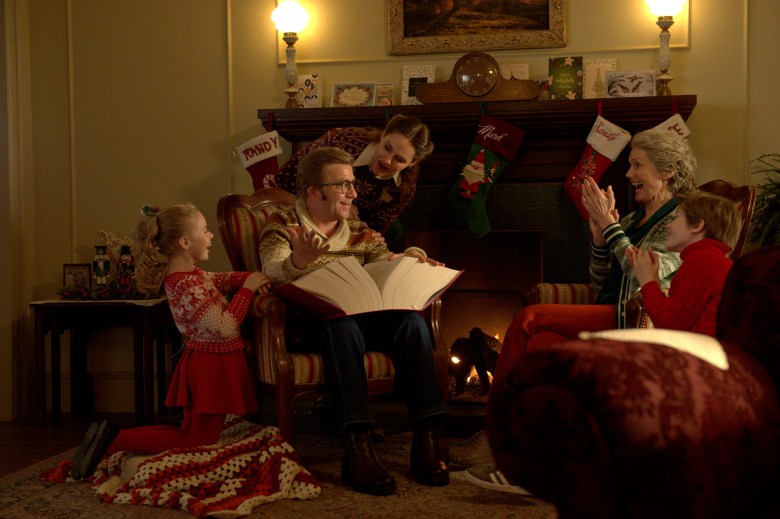 But there’s something oddly manufactured about this whole thing. If “A Christmas Story” was an unexpected hit that took off because of its offbeat charm and amusing familiarity, Kaytis’ film feels crafted totally in its image, afraid to be its own thing at nearly every turn. Fans of the first film will likely be beset by the sense that something is just slightly off about everything in “A Christmas Story Christmas,” like the persistent voiceover from Billingsley (who takes over from the dulcet tones of Shepherd himself, who memorably narrated the first film) to the meticulously recreated Parker family home (built from the ground up in Europe, whereas the original was shot in Cleveland).

It’s not a sequel; it’s a replica. And while that might bring some comfort and joy during the holiday season, wouldn’t you rather savor the real thing?