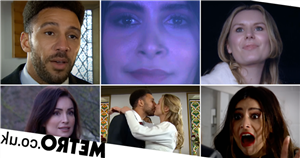 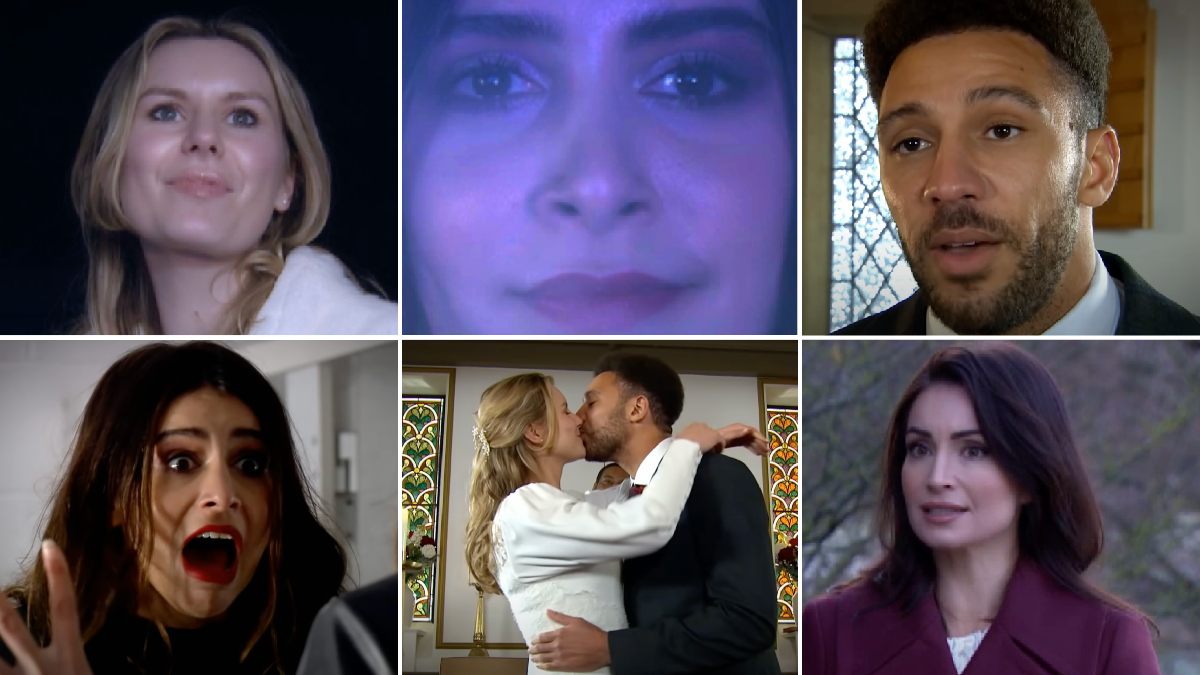 Emmerdale promised that the return of Meena Jutla would be an event to remember, and it’s safe to say that the first edition of the ITV soap’s big week did not disappoint.

The day of Billy Fletcher and Dawn Taylor’s wedding arrived, and love was in the air, as the happy couple tied the knot in emotional scenes.

Love, however, would soon turn to fear, as Meena returned specifically for the occasion, and she was hellbent on making her presence felt.

How? By shedding more blood, of course!

With jaw-dropping moments aplenty, and quite a few mysteries posed, Monday’s (February 14) outing of the spectacular week proved a hit.

Before the next offering, however, we’re delving into Part One once again, to take a look at all the hints and clues we picked up on, as well as the questions we’re going to need answered pronto!

Care to join us?

Meena promised to give the bride and groom a ‘wedding surprise’ in the opening moments of the episode, as she pointed her gun at the altar and pretended to shoot.

An omen of things to come? It’s likely, as subsequent episodes will see the killer pull the firearm on Billy and Dawn.

The trigger is pulled, that much we can confirm, so the question is: who will be on the receiving end of a bullet?

With the delivery company refusing to deliver the wedding cake, Priya Kotecha selflessly volunteered to go and retrieve it herself.

Leyla Cavanagh was proud of her pal’s positive attitude, as Priya noted it wouldn’t be a proper wedding without a ‘crisis or three’.

Referring to both the cake disaster and the destruction of Dawn’s wedding dress, Leyla replied: ‘Two [crises] down, one to go!’

Little did the wedding planners know, however, that they were seemingly foreshadowing the atrocity to come.

Meena’s revenge will be the biggest crisis of all, that’s for sure! But just how bad will it be? And whose blood will be spilled?

While Billy and Dawn tied the knot, Meena was seen getting herself ready for the big day in a bathroom nearby.

She contemplated what she would say upon making her grand return, evidently enjoying the theatricality of it all.

A trailer for the ITV serial drama’s explosive week was released last Monday (February 7), and it teased the scenes in question – one of which saw the murderer utter the iconic quote from The Shining.

For some reason, however, it appears to have been omitted from the final cut of the episode.

It wasn’t just the wedding party that had dibs on the drama, as Cain Dingle was wallowing in the wake of his showdown with son Kyle Winchester last week.

Moira pleaded with him to see sense and apologise to Kyle for scaring him, but Cain decided he hadn’t wallowed enough, and thus he locked her out of the living room, before grabbing a bottle of alcohol.

Chas was horrified when she discovered what was transpiring, and she vowed to get through to her brother. The question is: will she succeed?

Kim’s absence from the wedding

Kim Tate was noticeably absent from the wedding ceremony, despite telling Will Taylor several weeks ago that she wouldn’t miss it for the world.

An explanation was given for her absence, with Will informing Dawn that Kim is ‘too rough’ to get out of bed, implying that she’s not well.

Sorry, this video isn’t available yet.

Meena wasn’t the only one who promised a wedding surprise, as Billy teased Dawn by telling her that he’d got her another little gift.

Dawn’s interests were piqued, but when a limousine pulled up outside the church, she put two and two together.

Confusion, however, soon set in when she couldn’t find Billy, as she assumed he would’ve been inside the vehicle.

Upon realising that the driver was Meena, her attention was soon elsewhere, as she desperately pleaded for her life.

But the question remains: just where is Billy? Well, we can actually answer that one, as the above clip – taken from Tuesday’s (February 15) edition of the ITV soap – reveals that Meena kidnapped Billy prior to picking up Dawn.

In other words, he’s in the boot!

How did Meena get her hands on a limousine?

Dawn was left fearing for her life when she got inside a limousine, only to discover that the chauffeur was none other than Meena!

The question is: just how did the killer manage to get her hands on a limo?

Will we find out? Or will it remain one of life’s great mysteries?

We’ll just have to wait and see, but Meena has proven to be resourceful on many an occasion thus far, so it shouldn’t be too difficult to believe that she would have it in her power to get access to a limo, right?

‘Play for your life’

Meena instructed Dawn to be prepared to ‘play for her life’, as she turned up the music to drown out of her cries for help.

What does this mean? Well, in typical Meena fashion, Meena isn’t planning on instantly murdering her chosen victims, but rather she’s going to make a game out of it first.

The next episode will see her taunt the happy couple with a gun at a remote viaduct, and in disturbing scenes, she orders Billy to save either himself or Dawn, making clear that she will murder them both if he fails to decide.

Will Dawn and Billy die?

Meena is intent on taking another life, that much we know, but will she succeed in murdering Dawn and Billy? Or will it be one of them that dies as a result of her sick game?

Or will the duo manage to make it to safety before it’s too late?