Ask most fans of Better Call Saul about the show’s fifth season, which concluded tonight, and they’ll not only tell you that it was the AMC drama’s best to date, but the year they began seriously grappling with the question of whether the Breaking Bad prequel has finally matched, if not surpassed, its parent show.

Saul co-creator Peter Gould says he keeps his own goals more modest: “I begin every season worried that we won’t be able to equal the previous season. But, so far, I think we’ve done just that. Truth is, we do our best to go where the characters take us.”

I spoke last week with Gould and co-creator Vince Gilligan (who directed this season’s “Bagman,” and will be much more hands-on for the sixth and final season) about where the finale leaves Jimmy, Kim, Lalo, and more, their preparations for the show’s endgame, and how long it might take for those remaining 13 episodes to arrive, given the COVID-19 pandemic. Here are there answers to five key questions.

Is Kim Wexler, not Jimmy McGill, shaping up to be the series’ true antihero?
Each season brings Jimmy closer to truly being Saul Goodman, but as Gilligan notes, “It’s not one straight march downhill.” Adds Gould, “He seems more vulnerable at the end of the season than Saul did.”

Instead, the character closest to the darkness right now is Kim, who is thinking seriously about destroying the career of her old boss Howard Hamlin in order to get the money to set up a powerful pro bono practice.

“In a lot of ways, Kim is the soul in question here,” says Gould. “We know, for better or worse, who Saul Goodman seemed to be on Breaking Bad. But what happens to Kim Wexler? Where is she headed? There’s a lot of possibilities, and a lot of not-so-great possibilities.”

Gould says the decision to have Kim not only embrace sin, but rationalize her actions in a manner echoing Walter White, occurred to the writers very late in the season. Following Gilligan’s longstanding advice “to look very carefully at what’s already happened,” Gould realized that the season premiere concluded with Kim swearing she would never scam her own client — followed immediately by her doing exactly that, albeit with a pure-hearted motive. “As we approached the last half of this season,” Gould says, “it started feeling like — and maybe this isn’t the best phrase to use — maybe Kim Wexler breaks bad?”

How did Lalo become such an essential character?
Not easily. Gilligan and Gould are usually in sync on major creative decisions, but Lalo — the clever Salamanca cousin played by Tony Dalton, who was introduced late in the season and quickly become a fan favorite — was a big sticking point between the two for years. The character was mentioned by Saul Goodman in his first Breaking Bad episode, in a context that suggested he was some kind of bogeyman, but that was all we knew. And after a few years on this show of struggling to figure out who Lalo would be and how he would fit in with the story, Gilligan felt that was all there was to know.

“I’m embarrassed to admit this now,” Gilligan says, “but back in Season One or Two when I was more active on the show, Peter kept saying, ‘We’ve gotta answer who Lalo is,’ and I finally said, ‘I don’t know that we need to answer every single question.’ And man, I was wrong. If Peter hadn’t pushed, we wouldn’t have Tony Dalton. We wouldn’t have this amazing character. So, some of the ones that I found the most frustrating to deal with, that I said, ‘Ah, the hell with them. Who cares?’ tend to be the best ones of all.”

Gould knew he wanted Lalo to stand out from the other Salamancas, who are more volatile and/or stoic, and to be smart enough to get Gus Fring’s goat. “We went to our brilliant casting folks, Sharon Bialy, Sherry Thomas, and Russell Scott,” he says, “and we told them, ‘We have a new member of the Salamanca family. He’s a charming Salamanca, and playful.’ They brought us Tony Dalton, and I don’t know what else to say. We found a guy who’s got movie-star charisma, and he’s athletic, and he’s charming, and he plays every layer to every scene.”

There have been times since he was introduced when Lalo has seemed to border on superhuman, between his flair for leaping down from great heights and his knack for always knowing when he’s being lied to. Gould says they’re careful to not just let him be Spider-Man, but it can be a struggle.

“First of all, we try to make sure that the characters obey the rules of physics,” he says. “Everything Lalo has done was actually accomplished by an actual human being without wire work. I think that helps. The problem we run into most often is that Lalo, Nacho, Gus, and Mike are savvy, intelligent people. Gus, in particular, is a brilliant chess player who sees many moves ahead. Sometimes it’s very difficult to dramatize what’s going on beneath all these moves and counter-moves. How much does Gus know before he becomes omniscient? How much can Lalo deduce from what he’s seen? It’s the intellectual side that gives us fits.”

Lalo is either dead or very far away from Albuquerque during the events of Breaking Bad, but how might he have fared against Heisenberg?

“Who knows?” says Gilligan. “That might have been a bridge too far for Walter White.” 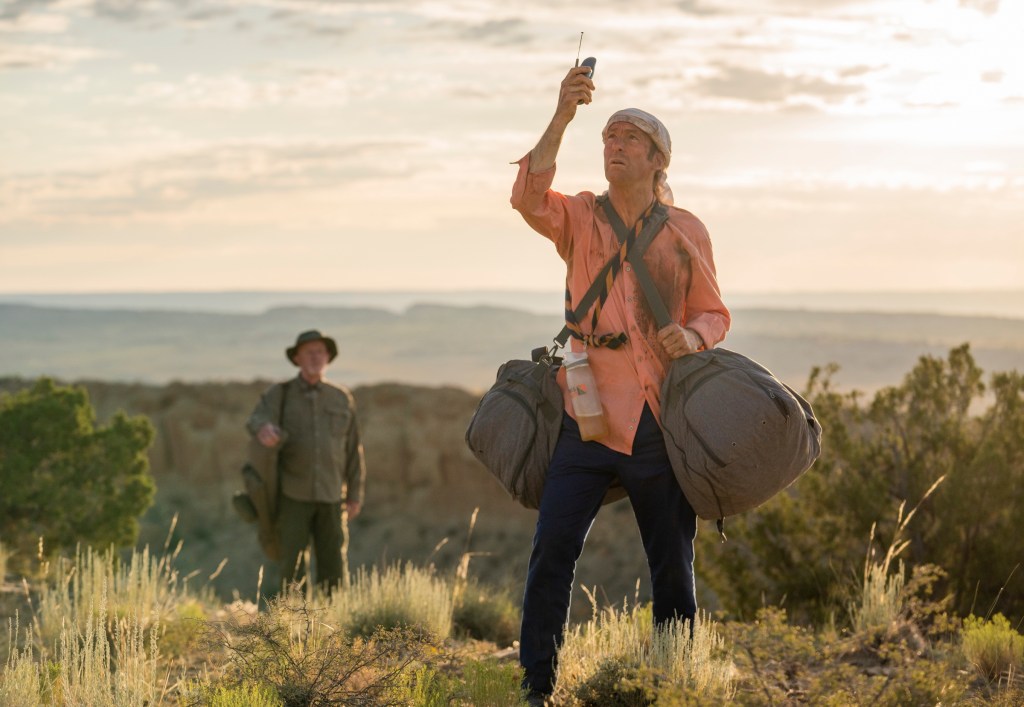 What does Saul really know about Mike and Gus?
On Breaking Bad, Saul Goodman initially describes his connection to Gus Fring as “I know a guy, who knows a guy, who… knows another guy.” And he seems oblivious that his investigator, Mike, is secretly working for Gus. Yet this season, Jimmy learns much more about Mike and/or the Fring organization than he apparently knew on the other show, and he and Mike seem more connected due to their time in the desert.

Gilligan argues that this isn’t an inconsistency, invoking Sgt. Schultz from the Sixties sitcom Hogan’s Heroes. Schultz would famously avert his gaze from whatever Colonel Hogan and the other prisoners of war were up to, bellowing, “I see nothing! I know nothing!” Gilligan and Gould see Jimmy’s professed ignorance as him simply choosing not to ask Mike more than the bare minimum about his other associates, for fear of getting in too deep with dangerous people.

That said, there are still dots that need connecting in that relationship. Gould acknowledges that the desert episode left Jimmy and Mike with more of a bond than they seemed to have on Breaking Bad: “If you remember, there were times when Mike threatened to break Saul Goodman’s legs, and he absolutely meant it. We’ll have to see how he gets there.”

Do Gilligan and Gould know how the series ends?
The co-creators famously don’t plan very far ahead with their storytelling. “We see about three inches down the road at any particular moment,” Gould likes to say. When, for instance, they open a season with Jimmy’s post-Breaking Bad persona, Gene from Cinnabon, in trouble, they joke that figuring out what happens next is something someone else will have to deal with the following year. “That’s a future Peter problem!” Gilligan jokes.

But while writing Season Five, Gould says, “The fog started to clear slightly about where we were going with all of this. So we started to think about how this all relates to where we’re going. Having said that, I don’t want to say we’ve got it all figured out. I’m very happy to have Vince in the writers room this season, even though we’re doing it remotely, because we’re getting to finish this thing that we started together. But we’re deep in the struggle. Even though we have ideas about where we’re going, we’re always ready to jettison them.”

When it came time to write the Season Five finale, Gould realized that they hadn’t gotten around to a lot of story ideas they had hoped to include. This happens each season, and Gould always reassures himself by saying that they’ll get to them eventually. But for next season, “We have these 13 episodes, and that’s it. There’s no ‘eventually’ anymore.”

How long will it be until we see that final season?
Around a year passed between several of the show’s early seasons, and nearly a year and a half between Seasons Four and Five. Even under normal circumstances, there would be another sizable gap before Season Six premiered, but the nationwide lockdown could make it much bigger. The writers had just convened to plot out Season Six when California residents were told to shelter at home. In that small way, the timing was fortuitous; Gilligan and Gould would prefer to have their writers assembling in person, but it’s the one part of making a season that can still be accomplished under these circumstances.

Still, no one knows when people will be able to safely gather in large enough groups to actually produce the show, and there are other logistical headaches to be sorted out. (Studio space is limited, and productions that have already been disrupted by the pandemic could get priority, for instance.) Gould didn’t like it when Saul took 2019 off entirely, and while Gilligan hopes Season Six will be ready to premiere in the fall of 2021, if they can begin filming this autumn, he says, “You’re going to have to ask Dr. Fauci here.”

And what should fans expect after however long the wait lasts?

Gould is more measured: “My short version is: We’re going to try not to screw it up.”