1883‘s finale was so heartbreaking, we accidentally made Faith Hill cry while talking about it.

Those who watched the Paramount+ Western’s final episode, which hit the streaming service Sunday, know what we’re talking about: Elsa Dutton, the gutsy teenage daughter of James and Margaret Dutton, died after an arrow wound to her liver failed to heal. The desire to stay near her final resting place led to the family’s decision to put down roots in Montana, instead of Oregon as originally planned. (Read a full recap and check out our finale post mortem.)

When TVLine spoke with Hill, who plays Dutton matriarch Margaret, we asked an admittedly impossible-to-answer question: In her mother’s eyes, was Elsa’s slow fade over two episodes a blessing or a curse? And that’s when things got watery, quickly.

“I guess I can only speak as Margaret, because I can’t imagine, I don’t even allow myself those thoughts as a mom,” said Hill, who has three daughters with her husband and 1883 co-star Tim McGraw. “The most difficult thing for Margaret is to not be next to her child during any type of suffering especially death.” She sniffled. “God,” she said, laughing, “I can’t even make it through this question!”

Once things were back on less emotionally shaky ground, the country-music star herself brought up a good, albeit disturbing point: Was Margaret inadvertently responsible for the injury that eventually killed her daughter? 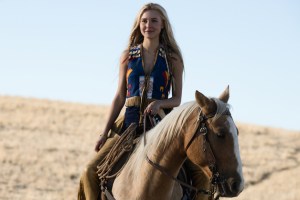 Let’s back up a minute. Over the course of the season, as Elsa became a cowboy and embraced that lifestyle, she stopped wearing dresses and opted instead for pants. When she met Sam, the Native American who would become her husband, he gifted her with a traditional Lakota vest and adornments, which she wore to her mother’s chagrin. In Episode 9, however, Elsa conceded to her mother’s request that she change back into a dress, given that the wagon train was heading to a fort, aka the closest thing to civilization the Duttons had seen in quite some time.

“It didn’t even occur to me when I read the script. I read it a million times. It didn’t occur to me even after we filmed it,” Hill said. “It only occurred to me after I saw it: My God, it’s my fault she was shot and killed, because had she had her vest on that was meant to protect her, given to her by Sam, maybe she could have survived.”

The realization sent Hill spiraling: Maybe the Lakota would’ve paused a moment before shooting Elsa, had she been wearing gear that was familiar to them? Or maybe the vest would’ve somehow made the arrow wound not as dire? She acknowledged that Margaret was facing rapid-fire decisions solo, under terrible conditions — “Sometimes these are life-and-death choices that have to be made in less than a second” — and credits the production, writers and her castmates for getting her so thoroughly wrapped up in the story that she didn’t realize the vest thing until much later. 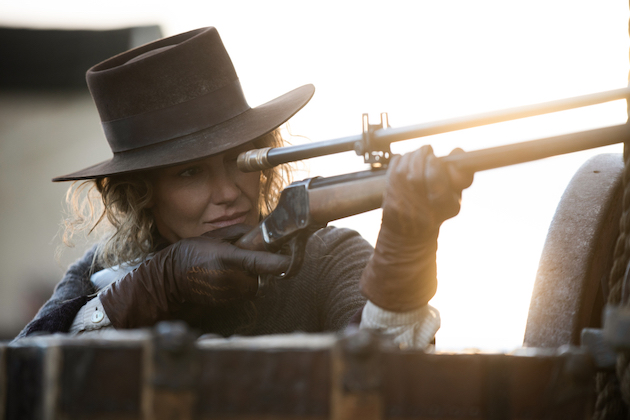 “I mean, we became those characters, and it never once occurred to me, ever, until I saw it,” she said, laughing. “I turned to Tim, and I said, ‘My God, it’s my fault! It’s Margaret’s fault she’s shot!’”

What do you think, 1883 viewers? Is Margaret partly to blame for Elsa’s death? Hit the comments with your thoughts!