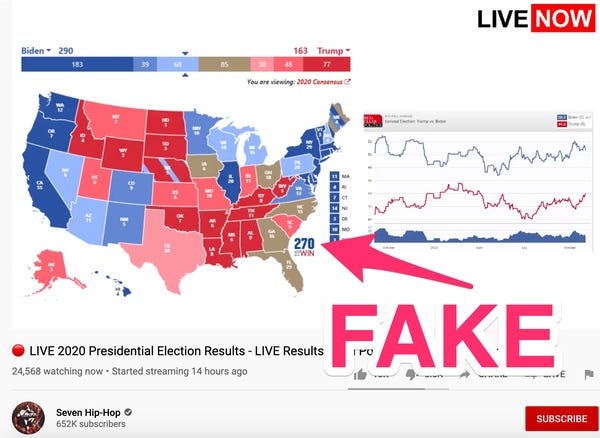 Hours before any state's polls closed on Election Day 2020, YouTube channels were broadcasting fake election night results to tens of thousands of viewers.

Eight videos out of the top 20 videos in the YouTube search results for "LIVE 2020 Presidential Election Results" showed what appeared to be the same fake results graphics that channels were spamming in an effort to get views and, on three of the channels, make money from advertisements that played before the stream via YouTube ad services.

None of the channels Insider found broadcasting fake results were affiliated with any political or news organizations; rather, hip-hop and music-related channels were found to be usurping outlets like CBS News and NowThis News in YouTube search results. Three of the top four results for "LIVE 2020 Presidential Election Results" were all misinformation, an Insider search found.

When searching "Election results" on YouTube, a banner appeared before results that read "Results may not be final. See the latest on Google," linked to a live counter that showed results were pending.

However, the top search result for all of the terms Insider tried, including "Election results," was a fake broadcast from a channel called Seven Hip-Hop with more than 650,000 subscribers that describes itself as "a community hip-hop channel that works closely with labels and independent artists." The channel's most popular uploads are 2Pac songs, one of which has over 380 million views. Its election misinformation livestream was being viewed by more than 24,000 people at the time of publication, and Insider was served an advertisement before the video.

Seven Hip-Hop's stream was just a still image with a flashing "LIVE NOW" graphic in the top right corner, but the live chatbox to the right of the stream appeared to show viewers who believed that Biden was winning the Electoral College based on the fake image.

The most common graphic Insider found the channels were using, including Seven Hip-Hop, combined a mock-up 270toWin.com graphic and a falsely edited RealClearPolitics graphic. Slate reported the morning of Election Day 2020 that 270toWin would be "The Hottest Election Night Website" since it allows users to create their own election forecast, clicking on states to adjust the outcome from "safe" to "likely" to "leans" red or blue.

Slate also reported that some users were creating mock forecasts as jokes using 270toWin in the lead-up to Election Day 2020, before YouTube channels used the site's template to make misinformation graphics.

Other social media platforms created policies in advance of the 2020 election to moderate election results announcements. Twitter, for example, instituted a policy to label tweets that preemptively called 2020 races before an announcement from election state officials or "a public projection from at least two authoritative, national news outlets."