The Save Our Stages Festival (#SOSFest) has shared the full schedule for the upcoming three-day virtual event, which will feature sets from Foo Fighters, Miley Cyrus, Brittany Howard and more.

The festival will kick off October 16th at 8 p.m. ET with a performance from Alec Benjamin at the Hotel Cafe in Los Angeles. Other Night One shows include Macklemore at Neumos in Seattle, G-Eazy at the Independent in San Francisco, and YG and Marshmello and Demi Lovato both at the Troubador in L.A.

Night two, October 17th, with launch at 4 p.m. ET with Jason Mraz at Belly Up Tavern in San Diego. From Nashville, Kelsea Ballerini and Brittany Howard will play the Exit/In and the Ryman, respectively, while Cautious Clay will play World Cafe Live in Philadelphia, Rise Against will play the Metro in Chicago, the Roots will play the Apollo Theater in New York and Major Lazer will perform from Gramps in Miami. Both Phoebe Bridgers and Foo Fighters will play the Troubadour, while Miley Cyrus will perform at the West Hollywood spot Whisky A Go-Go.

The third and final night will start at 5 p.m. ET with Little Big Town at the Exit/In, followed by the Brothers Osborne at another Nashville venue, Mercy Lounge. Dave Matthews will perform at the Jefferson Theater in Charlottesville, Virginia, while Monica will perform at Center Stage in Atlanta. The night will end with the Lumineers performing from the Boulder Theater in Boulder, Colorado.

Robin Williams: The Triumphant Life and Painful Final Days of a Comedic Genius 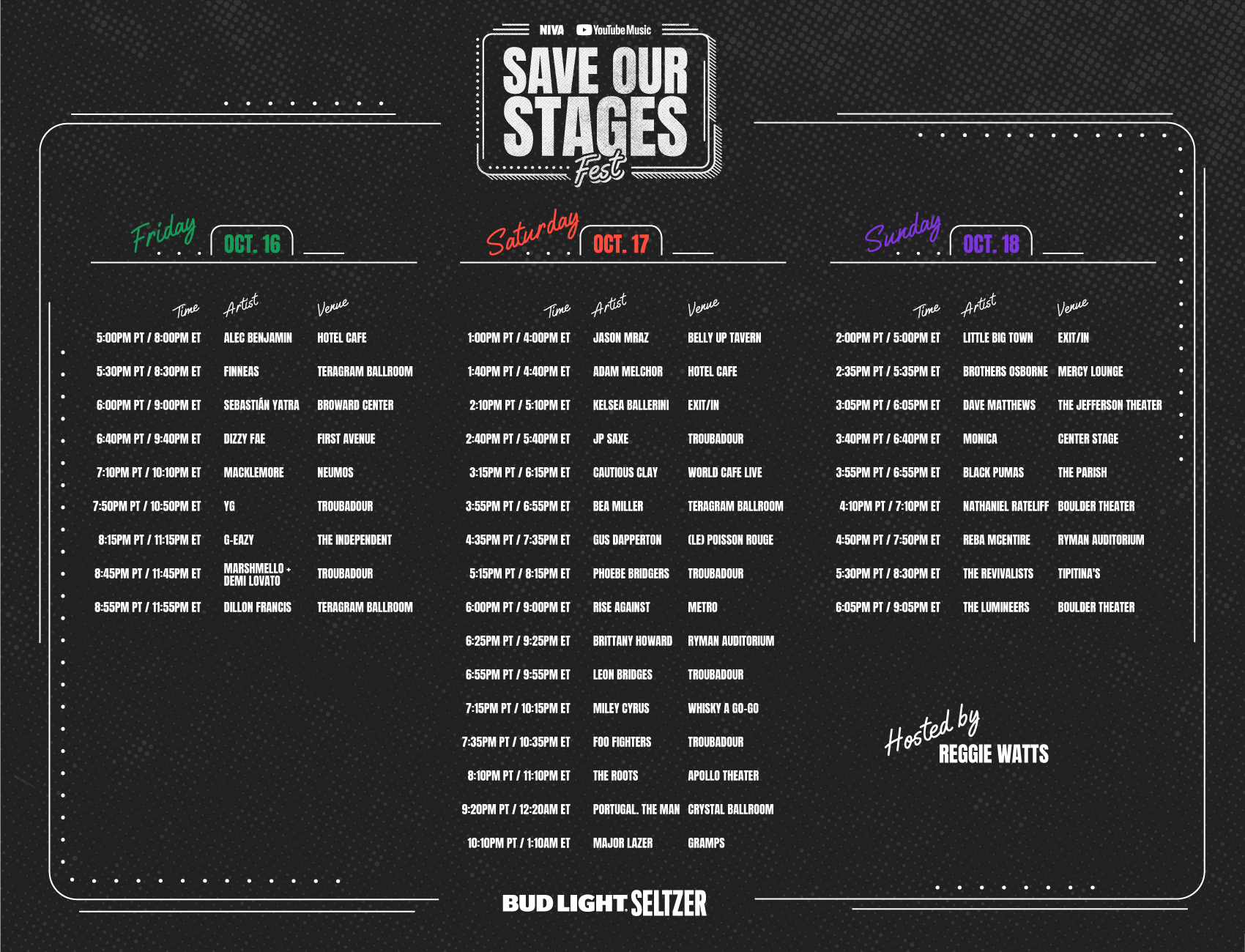 In total, #SOSFest will feature performances from 35 artists at 25 independent concert venues throughout the U.S. Comedian/musician Reggie Watts will host the proceedings, which will stream live on the National Independent Venue Association’s (NIVA) official YouTube channel, while segments will also air on individual performer’s YouTube channels.

During the #SOSFest, viewers will be encouraged to donate to NIVA’s Emergency Relief Fund, which is benefitting independent venues in danger of closing due to the Covid-19 pandemic. The event is also meant to raise awareness about the looming crisis facing independent venues, many of which will be at risk of closing for good without federal funding. Provisions from the Save Our Stages Act were recently included in the updated Heroes Act — one of several proposed Covid-19 relief bills — though the likelihood of any kind of stimulus package passing before the election (or even after) remains uncertain.