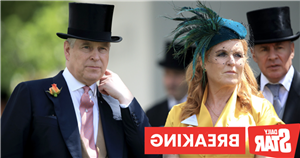 Prince Andrew's ex-wife, Sarah, Duchess of York has praised her former husband after he was forced to take a backseat at the recent Order of The Garter procession.

Sarah, 62, has had a rather relaxed relationship with Andrew, 62, since their divorce in 1996, with the pair remaining the best of friends and also reportedly sharing a roof at Royal Lodge on the Windsor Great Park estate.

Now, the Duchess has spoken about their relationship just months after the Duke settled a civil court sex case after he was accused of sexual abuse – a claim he strongly denies.

Speaking to Mariella Frostrup on Times Radio about their living arrangements, the Duchess said: "I spend so much time out of the country, doing my philanthropic work, that when I do come back in, I'm very lucky to be able to stay here.

"It would be very wrong if I said it was my home, it's a place where we are a united front with the girls, it's their home.

"And now my grandchildren come here and I have always believed in communication, compromise and compassion.

"I will stand very firmly by Andrew who is a very good and kind man and that's what I believe."

She went on to say: "We are divorced and I do spend as I think it's very important Mariella that people realise that I don't spend long here in England, because I don't wish to.

"I'd much prefer being out, I've built 156 schools in Africa and Poland and, you know, and I just want to keep going doing my philanthropy work."

Discussing their fairytale wedding and Andrew, the Duchess added: "He's a very good and kind man, he's a good man.

"It was an exceptional day, the 23rd of July 1986 and it was just extraordinary, I think my life is an amazing life.

"I think I've been very lucky and I am now just beginning my life again and I think it's pretty cool to be able to say that."

The couple separated after Andrew's duties as an officer in the Navy caused him to be away for the best part of the year.

The Duchess has previously said she saw him for just 40 days of the year in their first five years of married life.

Sarah and Andrew announced their separation on March 19, 1992, with Buckingham Palace announcing that Sarah would no longer be carrying out any public engagements on behalf of The Queen.

The Queen later announced she would not be taking responsibility for Sarah's debts.

After four years of separation, the couple officially announced their divorce with the Duchess saying she received £15,000 per year as part of a settlement.

A decree nisi was granted on April 17, 1996, and their divorce was finalised on May 30 of the same year, during which she legally retained Her Royal Highness style similar to other divorced peeresses.

Sarah however chose not to use her Her Royal Highness title and relinquished it as part of their divorce.

For more of the latest showbiz news from the Daily Star, make sure you sign up for one of our newsletters here.