Piers Morgan is going to be gunning for Robbie Williams come Monday morning because the star has been accused of “furiously chewing gum” inside the chapel at Princess Eugenie and Jack Brooksbank’s wedding.

It’s just not the done thing in a place of worship, or among members of the royal family.

The couple’s six-year-old daughter Teddy on the other hand was doing a marvellous job as bridesmaid alongside Princess Charlotte and page boy Prince George.

Fans were less than impressed by Rob’s uncouth behaviour, making their disapproval known on Twitter. And apparently model and actress Cara Delevingne was at it too…

Fans were loving Teddy though, praising her impeccable manners and her very funny reaction to the trumpets sounding in the chapel as Eugenie and Jack left. 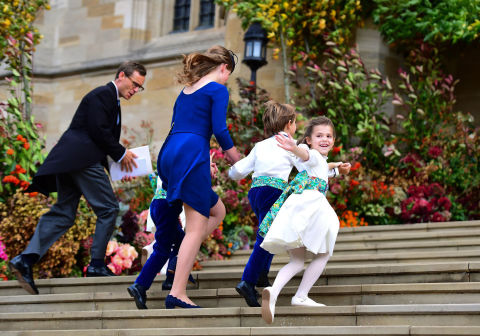 Earlier this year, Beckham was the source of Piers’ indignation after he was pictured chewing at Prince Harry and Meghan Markle’s wedding in Windsor in May.

“In the old days you’d be taken to the tower for that kind of disrespect,” the presenter had said on Good Morning Britain.

We’ll look forward to Piers saying something similar next week.