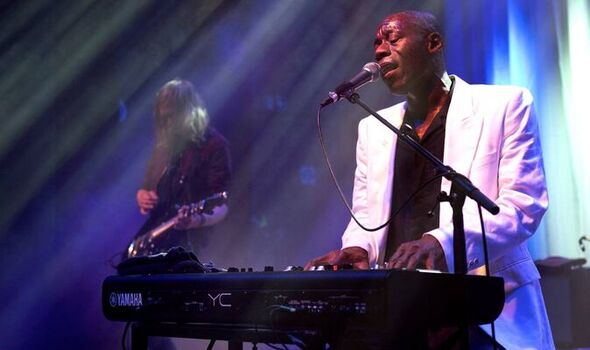 The swaggering, euphoric opener, urging us to “keep on moving like The Terminator”, fired the emotions and set both the scene and largely the pace for much of a set that was prime entertainment from start to finish.

Next up was High On Love, from 2020’s Twice In A Lifetime, which is as good an inducement as any to go out and buy the album; as were other new numbers, the crowd-pleasing Too Much To Lose and The Way I Feel – the West London audience knew every word and sang along lustily.

Andrew’s guitar-laden take on the beautiful Bill Withers classic, Ain’t No Sunshine, was sublime and effective, while Truth Hurts Too Much has the potential to become a stand-out blues favourite in his already impressive cannon.

Londoner Andrew, 59, was awarded an MBE in 2019 for services to music and continues to deliver live. His enthusiastic set ranged from recent cuts like Love Remedy to a quartet of some of his strongest early songs including Ride The Storm, Lay Your Love On Me and This Generation from 1994’s Permanent Shade Of Blue.

1991’s Get Ready gave him the opportunity to really connect with his fans, show what his band can do and bring the main show to a frenetic close.

Clearly happy in his own skin, Roachford relishes performing on stage, aiming humorous banter towards his musicians, his audience and himself, which all adds to the homely aura he exudes.

His set was a balanced mix of cuts and hits from his past, including Over My Shoulder from the time he spent touring and recording with Mike And The Mechanics. While his 1989 smash Cuddly Toy came with a hugely uplifting extended ending.

This was a show which got the punters old and new bopping in their seats and dancing on the floor. The night ended with a rousing rendition of Only To Be With You. Over-all, it was an enthralling display of multi-talented musicianship that delivered in no uncertain terms.

Andrew Roachford and his band are on a high. Catch them on their current Twice In A Lifetime tour if you can.

His openers President Street are also well worth seeing. Hailing from Melbourne, the Aussie duo delivered a largely up tempo set that kept a wanting crowd more than happy.

They were reminiscent at times of early 80s big Aussie hitters Icehouse – not a bad thing.

Singer Ruby Servinis with her slick sexy moves and beautiful rasp-laden voice blended perfectly with the even slicker keyboards and bongos of partner in crime Peter Moses.

Complimented here by guitarist Joseph Ross, they delivered a vibrant and entertaining performance.

One gets the feeling that if this dashing duo let Ross flair and added a real quick-fire drummer for live shows, they really could excel on stage, as the songs are perfect to stretch.

Nonetheless with numbers like the calming Heal, which they’ve just shot a video for, the Down Under wonders are certainly ones to watch.