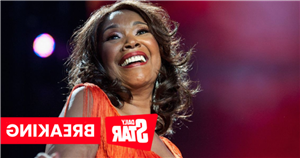 According to the singer's publicist, Roger Neal, passed away on on New Year's Eve in Los Angeles.

The Pointer Sisters star, who was responsible for a number of hits in the 1970s and '80s with her sibling group, died in Los Angeles on New Year's Eve.

The famous songstress was surrounded by family at the time of her death, which came just two years after her sister and group co-founder Bonnie Pointer, who died in 2020.

Anita's sister Ruth passed away in 2006.

A statement shared by the family said: "While we are deeply saddened by the loss of Anita, we are comforted in knowing she is now with her daughter, Jada and her sisters June & Bonnie and at peace.

"Heaven is a more loving, beautiful place with Anita there.

"She was the one that kept all of us close and together for so long.

"Her love of our family will live on in each of us,” the statement concluded, before requesting that fans respect her family's privacy."

Fans have since rushed to their keyboards to share their sadness following Anita's death.

Another added: "Rip to a Bay Area legend Anita Pointer! The Pointer Sisters were huge in the 70s and 80s! They need a documentary!"

A third person said: "Her voice on my mind much of late. What a searing voice.."

The Pointer Sisters originally began as a duo with Bonnie and June Pointer in the late 60s, but Anita soon joined and made it a trio.

They scored hits with songs including I'm So Excited, Jump (For My Love) and the Bruce Springsteen–penned Fire.