Britney Spears may have kept relatively silent about her conservatorship, but in 2016, the singer expressed how “oppressive” it has been for her. In confidential court documents obtained by The New York Times, a probate investigator shared how Britney’s father Jamie Spears had control over not only who she dated, but how she designed her home.

Despite earning millions from her Las Vegas residency in 2014, the singer alleged she was only allowed $2,000 per week, which she could only spend with her father’s permission. Jamie, however, was granted 1.5% of gross revenues from her sold-out Las Vegas shows and now earns approximately $16,000 per month as her legal conservator, according to The Times.

The publication, which has been highly invested in Britney’s conservatorship, even co-produced the documentary “Framing Britney Spears” earlier this year. The 74-minute special presented her intense relationship with the media and her father, who was appointed as her sole conservator in 2008 following a public breakdown. Similar to a guardianship, a conservator makes financial and health-based decisions for people who are incapable of doing so … usually for the elderly and mentally vulnerable.

But five years ago, Spears showed her strong sense of self as she told a court investigator how she’s “sick of being taken advantage of.”

Britney Spears reportedly said there's 'too much control' over her 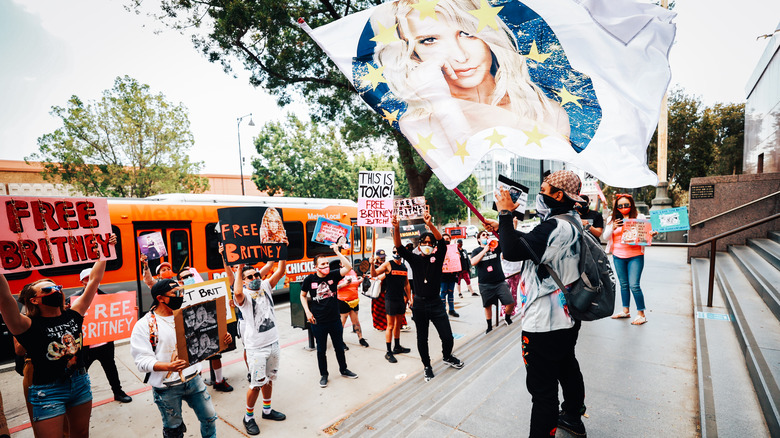 Just a day before Britney Spears addresses her conservatorship in court, The New York Times provided fans with a glimpse of her early views. “She articulated she feels the conservatorship has become an oppressive and controlling tool against her,” a court investigator wrote. The publication also referred to the investigator’s quotes of Britney saying the system had “too much control … too, too much!”

In 2016, the singer explained her credit card was held by her security team, and then in 2019, she revealed she was forced to stay at a mental health facility and perform against her will. “She is ‘sick of being taken advantage of’ and she said she is the one working and earning her money but everyone around her is on her payroll,” the investigator said. But Britney’s life may change after she provides a personal testimony during her court hearing on June 23.

In November 2019, Judge Brenda Penny denied Britney’s request to replace Jamie Spears as her sole conservator with Jodi Montgomery, per People. The licensed conservator, Montgomery, was appointed last year after Jamie temporarily stepped down after 10 years. Britney’s attorney Samuel Ingham told the judge she’s not only “afraid of her father,” but refuses to “perform again if he’s in charge.” While it’s only a matter of time until we hear Britney’s latest words, there’s no doubt her fans will be supporting her. Similar to previous hearings, #FreeBritney followers are expected to gather outside the downtown LA courthouse, per The Guardian.