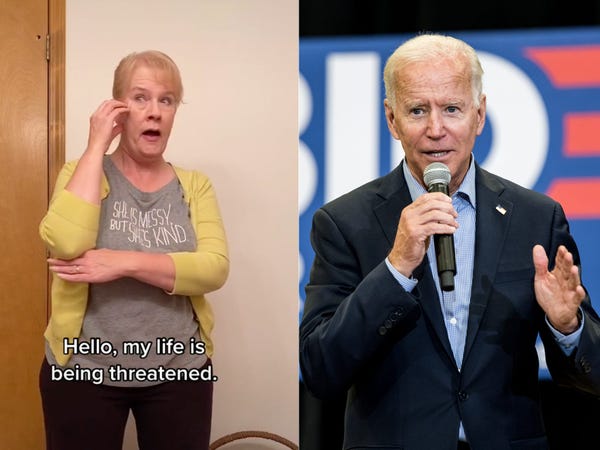 Over the last year, "Karen" content become a staple of internet discourse. While the once-popular name was originally used in memes depicting an unflattering "mom haircut" and condemning a "Can I speak to the manager?" attitude, the term has evolved amid the pandemic and nationwide Black Lives Matter protests to describe more shocking behavior from some white women in viral encounters.

A quick social media search yields numerous behaviors attributed to someone labeled a "Karen," including refusing to wear a mask amid the pandemic, entitlement to public space, fearing people of color, and opposing the Black Lives Matter movement.

However, according to data gathered by The New York Times and Siena College, women actually named Karen may tend to have different political leanings than those assigned to them by meme culture.

Karens may be more likely to favor Biden than Trump

After polling 17,025 likely voters in nearly every battleground state, The Times created a database of 102 commonly-reported first names and corresponding presidential candidate preferences. Among the admittedly limited sample, Karens defied their stereotype.

57% of those likely voters with the first name "Karen" listed Joe Biden as their preferred candidate  — while only 38% preferred Donald Trump.

Karens' support for Biden was the highest among the top 10 common female names (followed closely by Barbara, Lisa, Patricia, and Elizabeth).

Likely voters named Nancy, however, showed a strong preference for Trump — 54% listed Trump as their preferred candidate compared to 41% who preferred Biden.

The Karen findings, according to the Times, could be a sign of how older voters are thinking, as Karens represent a group composed primarily of women aged 40 and up (the name ranked in the top 20 names for baby girls from 1941 to 1971).

Among common male names reported by polled individuals, Richards showed the strongest preference for Trump (64% listed him as their preferred candidate), followed closely by Thomases and Williams.

eight of the top 10 common male names preferred Trump, while likely voters named Joseph and Christopher were split 50/50 between the candidates.