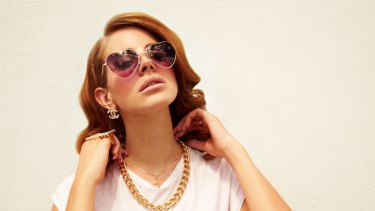 For Lana Del Rey music has become secondary to the theatrical stylings that have garnered her a cult following. Nonetheless her dedication to an aesthetic seeps into the music, creating fully realised soundscapes that meld nostalgia, romance and vignettes of old Hollywood. She is both an effervescent "emoter" and a satiric actress, often at the same time. “God damn, man child,” is the album’s opening line, sung with sheer irreverence over soaring strings and brass. Recruiting pop producer Jack Antonoff and songwriter Rick Rubin (Doin’ Time) for her sixth studio record, Del Rey immerses herself in a Californian dreamscape tempered by painter Norman Rockwell’s own commentary on US culture. Amid stripped-down lullabies (F— I love you), twisted fantasies (Bartender) and Brit-pop inspired jaunts (Love Song), Del Rey expertly dips in and out of the past, somehow creating something new every time. While her barbed tweets at the President had some hoping for a protest album, Del Rey forgoes a political record in favour of one that celebrates being American. Fans will have to make do with what she promises is The Next Best American Record. And it just might be. KISH LAL

It's now widely accepted that Martin Simpson is England’s finest living male folk singer – especially when his recordings are, as here, enriched by Andy Cutting (melodeon, diatonic accordion) and Nancy Kerr (fiddle, viola). This remarkably complete musician (nominated for the BBC Folk Awards 31 times – more than anyone else) is a superb finger-style guitarist, who here plays five-string banjo, six-string fretless banjo, bass guitar, banjola, resonator, acoustic and slide guitar. A gifted interpreter, he is capable of infusing Robb Johnson’s powerful attack on greed, elitism and war-mongering, More than Enough, with sad melancholy. Equally he can turn his talents to tender eulogies to English nature (Kingfisher) and make ancient, timeless folk songs (Queen Jane and Who’s Going to Shoe Your Pretty Little Foot) so fresh and vibrant that they sound as though they were penned yesterday. Rare among his British contemporaries, he is comfortable with Americana. Songs like Shel Silverstein’s Hills of Shiloh and Henry Gray (about a Chicago blues pianist) fit comfortably into this wonderfully diverse collection. A seven-track bonus album features Simpson’s instrumental virtuosity. BRUCE ELDER

As both the sonic instigator and spiritual guide of punk rock, Iggy Pop is no stranger to making albums that position him as an elder offering wisdom and a backbeat. As long ago as 1993’s exuberant American Caesar the former Stooges firebrand was a grunge-era guru feeding off his unlikely survival and joyous energy. His new album offers a more grizzled perspective, with the 72-year-old Pop as the philosophical old gunfighter riding towards a final showdown in an Anthony Mann Western. “Love and sex are going to occur to you,” he intones on the spoken-word soundscape The Dawn, “and neither one will solve the darkness.” On a personal and national level, existential fears inform these songs and they unfold through a studio palette that mixes the languid post-punk groove of Love’s Missing with the jittery electronic rhythms of Sonali, a free-association journey down freeways and fun times. Aside from Pop’s weathered baritone, the defining instrumental voice, a trumpet's noir-like jazz tones, adds Chet Baker’s shadow to the mix. It’s an eclectic album, capable of fun but shorn of momentum and easily disturbed. It suits the times. CRAIG MATHIESON

You hear their years of communing across so many varied projects before finally coming together as a duo. Given the vast array of idioms at their mutual disposal, the common ground upon which they settle might surprise. Matt McMahon (piano) and Carl Dewhurst (acoustic and electric guitars) choose to converse on elegiac songs with the focus tightly upon beauty of line and wistful harmonies. McMahon's love of Irish traditional music is represented by May Morning Dew and Summer Is Coming and it's almost as if these set the tone for the originals, because all are misted with restraint and shine with tender lyricism. Yet so effortlessly does the music unfold that you never sense they've backed themselves into a corner. They are like two poets finding the confines of the sonnet form a catalyst for creativity rather than a manacle. Those more used to hearing Dewhurst use his electric guitar as a textural device will be reminded of his gift for improvising gorgeous melodies – an ability to match McMahon's own. They nod to their jazz backgrounds with a bittersweet Moonlight in Vermont, and to free improvisation with the appropriately titled Pretty. JOHN SHAND

They’re saying this is the fourth instalment in Justin Vernon’s seasonal output as Bon Iver. This one’s supposedly autumn. But a better way of viewing it is as a musical summation. On his 2007 debut, recorded in an isolated Wisconsin cabin with a guitar, he was the quintessential heartbroken loner. This album is its opposite in execution: a collective rather than one man, plus eclectic guests including James Blake, Bruce Hornsby and Aaron Dessner. After going baroque on his second record, then fracturing everything with his third's electronic manipulations, i,i brings all his incarnations together. Glitchiness and lushness are bedfellows here – witness iMi, where cut-up vocals and clashing electronics contrast with softly plucked guitar and pillowy horns. If Vernon is as lyrically cryptic as ever, unusually direct telegrams from his heart poke through the weeds: “I like you, and that ain’t nothing new”; “why can’t we just patch this up?”; “won’t you tell me how to get it back?” The highlight, Hey, Ma, beautifully blends the melancholy, grandeur and experimentation he’s striving to achieve. That guy in the cabin wouldn’t recognise himself. But that’s probably the point. BARRY DIVOLA

Shooting Stars by Bag Raiders is a sugary, irresistible Australian dance-pop track with nearly 113 million views on YouTube. The bad news is there's nothing remotely as endearing on the Sydney duo’s second album, arriving nine years after the first. The one-time Triple J favourites seem to have tailor-made Horizons for that radio station’s demographic, offering a grab-bag of whiney male vocals, garish horn blasts and saccharine sentiments. On I Need You they channel the milquetoast melodies of German folk duo Milky Chance, while Wild at Heart, featuring Mickey Kojak, is cheesier than a fondue party, loaded with the siren synths the kids can’t get enough of these days (they’re back on Lightning, featuring the Kite String Tangle). There are glimpses of Bag Raiders’ latent songwriting nous on the catchy coda of I Need You, the interesting progressions in Medicine (including some surprise house keys) and the floaty textures of Anchor. But while Shooting Stars and to a lesser extent 2010’s Sunlight felt current and fresh, these tracks feel like they’re chasing uninspiring trends. Bag Raiders’ younger fans will probably love them anyway. ANNABEL ROSS