Howard Freeman is one of Australian live music’s great survivors, an industry veteran who has spent more than 50 years in the game and still attacks his job with vigour.

He’s spent time on stage with rock royalty such as Billy Thorpe, Tex Perkins and Nick Cave across the decades, but his is probably not a name you know.

Mr Freeman is a roadie, part of the indispensable crew that makes the show happen, setting up smoothly and on time each night (hopefully) then packing up when it’s over.

Most roadies do it because they love it, he says, but it’s a precarious line of work, and he has seen so many “fall by the wayside” since he started on stage doors in 1965 while a boy of 14. 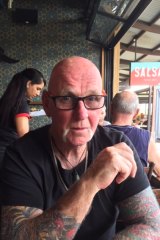 “It’s a life where you’ve got to push yourself and reinvent yourself and carry your can and dig a hole if you have to, to survive … [or] you become a statistic,” he said.

Freeman was at the Palais Theatre in St Kilda on Sunday for Roady for Roadies, one of a planned series of fundraisers.

Roady for Roadies is raising money for Support Act, a charity that provides practical and financial help to artists and music workers who encounter financial hardship.

Those who do, through illness or injury for example, can find there is no safety net.

Support Act also received a $100,000 grant from the Andrews government on Sunday, the first time it has ever received financial help from a government of any stripe, according to the organisation's chief executive Clive Miller. 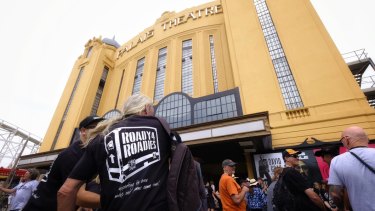 Roadies gather outside the Palais for announcement of hardship grant fundingCredit:Luis Ascui

Martin Foley, Victoria’s Minister for Creative Industries, called on other governments to also give support to Support Act.

“Roadies are the heart and soul of the music industry. Without them there is no show, yet they are over-represented in such bad outcomes when it comes to suicide, mental health and wellbeing,” Mr Foley said.

Mr Miller said just one per cent of the charity’s clients have health insurance, and three per cent are paid superannuation.

“Careers can be short or erratic and working conditions can be very challenging, particularly if you’re a touring band,” he said.

“Of course, as people get older they can get injuries, they suffer from ill health, and all these things affect their ability to be able to work.”

Photographer Pam Kleeman-Passi was at the Palais and spoke of how Support Act had assisted her in a desperate time in her life.

Her husband, Congolese musician Passi Jo, was diagnosed with cancer in 2014 and died in 2016. Ms Kleeman-Passi's own work as a sessional lecturer was also sporadic at the time.

Support Act helped the family buy a car while Passi Jo was sick, and contributed to funeral costs when he died.

“It was enormously beneficial to me, just to relieve the pressure of trying to sustain a lifestyle that was becoming very difficult with the grief of losing Jo, the need to finish his work and to just continue to live,” Ms Kleeman-Passi said.

“It was a real lifeline to me.”