Lil Baby Flexes With Rolls-Royces, Stacks of Cash in 'Right On' and 'In A Minute' Videos 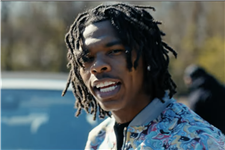 Lil Baby surprised fans Friday with an unannounced drop of two new singles, “Right On” and “In A Minute,” each accompanied by a music video. The songs mark the Grammy Award-winning rapper’s first solo releases of 2022.

In both clips, Lil Baby finds himself surrounded by the finer things in life — money, designer clothing, luxury automobiles, beautiful women, adoring fans. “Right On” takes place in Atlanta’s Oakland City neighborhood, where the 27-year-old grew up — and Lil Baby isn’t afraid to show his hometown how far he’s come as he parades down residential streets in a fleet of Rolls-Royce Phantoms. Throughout the track, Lil Baby details his prowess with the ladies as he taunts his haters. “Tell the police I don’t do nothing,” he says. “I been selling these songs.”

While the “Right On” video involves several fictional storylines, “In A Minute” culls footage from Lil Baby’s daily life, showing the rapper traveling the world on private jets, meeting fans and hanging out with friends. This intimate look into the “Drip Too Hard” hitmaker’s life complements the song’s more reflective, honest nature.

After receiving eight nominations in total, Lil Baby took home his first Grammy Award last week, winning Best Melodic Rap Performance for “Hurricane,” a collaboration with Kanye West and The Weeknd. The rapper is scheduled to perform at Coachella this month, followed by a handful of stand-alone shows and festival appearances — including Lollapalooza — throughout the summer.