“I kind of just accepted that no one would really care about my work because I was such a weirdo,” says New York’s Kelly Moran, an avant-garde composer and pianist who drones, plucks and buzzes on the lines between modern classical, ambient, electroacoustic and jazz. “I had so many rejections [from record labels], and so many that were based around the fact that what I was doing was too niche. Part of me was like, ‘No one’s ever going to hear this, but I need to do it for myself anyway, because if I don’t I’m just going to feel like I’m dead.’”

In fact, despite working in the esoteric discipline of prepared piano — the John Cage-ian technique of manipulating piano strings with carefully placed bolts, screws and sundry objects — Moran has found a steadily growing audience. Her last album, 2017’s Bloodroot, made critical year-end lists. She was plucked to be the touring keyboardist for Oneohtrix Point Never’s deconstructed, apocalyptic live rock band. And her third studio album, Ultraviolet, is being released this week by Warp Records, the prestigious electronic music label that’s home to Aphex Twin, Boards of Canada and Flying Lotus. 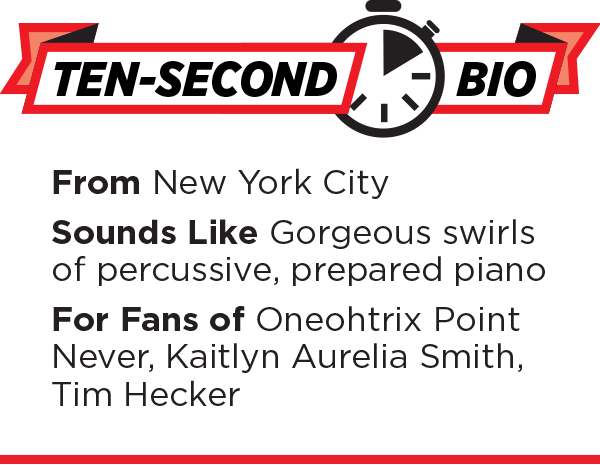 She’s on the gently chilly porch of Los Angeles experimental music club Zebulon when we meet, here to see a solo set from her bandmate, flurrious drummer Eli Keszler. It’s a busy week — she’s already knocked out another interview, done a radio session with 0PN and found a solution to the iPhone she dropped from a second-story balcony. After this, she has a solo show of her own and an NTS session to perform. She flew in three days earlier for a Oneohtrix show at Walt Disney Concert Hall, which had no shortage of soundchecking. For the show, Yamaha loaned her a $65,000 TransAcoustic piano that also works as a MIDI controller. “People have done little shows [on the TransAcoustic] — like club shows — but this is the first in a concert hall,” says Moran. “It’s like they’re giving me a Ferrari for a day.”

It’s a long way from her origins as a six-year-old playing an antique piano in Long Island. Moran was classically trained and, as a teenager, gravitated to alt-rockers like Tori Amos, art-metal bands like Kayo Dot and electronic envelope-pushers like Autechre. She studied composition, studio engineering and piano performance at the University of Michigan, where professor Stephen Rush taught her about modern composition.

“I didn’t get credit, but he taught me out of the kindness of his heart,” says Moran. “Every year at the end of the school year, he would do an illegal concert in the dance building because there was a piano there that they let you prepare.” In the popular yearly tradition — held at midnight on the last day of class — Rush would play John Cage’s mid-Forties prepared piano landmark Sonatas and Interludes. For her final year, Rush taught Moran how to prepare Cage pieces and let her play her favorite of those pieces, the tumbling, music-box-y Sonata XII. 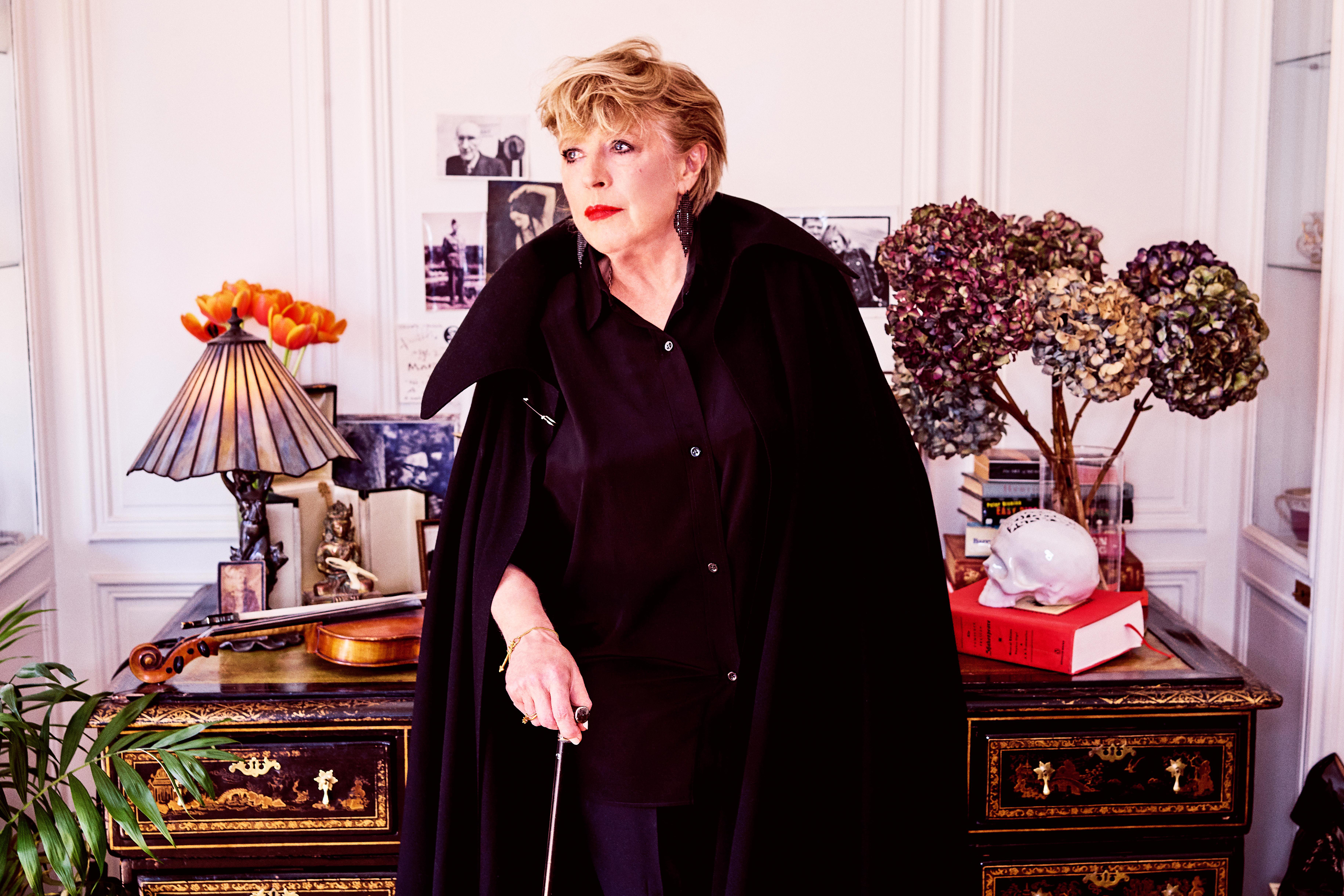 “The building was locked, and he left me a note outside that was like, ‘Throw rocks at the window — parentheses, small ones,’” she says. “During the performance he let me play the 12th Sonata, and while I played it he danced, which was really special.”

Moran went on to get a masters at the University of California, Irvine in 2012, after which she moved back to New York, hoping to eke out a living accompanying dance troupes. For a creative release, she fell into New York’s highly technical, unapologetically abrasive “brutal prog” scene, playing bass in noise-punk titan Weasel Walter’s Cellular Chaos and synths with angular chamber-gloomsters Voice Coils.

“As the years went by, I would be working on my music on my own, but not really in a focused way,” says Moran. “I kind of lost my confidence. At a certain point I hit a wall where I was like, ‘Oh my God, I haven’t made a record.’”

Holed up indoors during a blizzard in 2016, Moran spent a weekend at her parents’ house in Long Island tinkering on prepared piano. “I had been too scared to approach [composing on] prepared piano, because I knew that as soon as I did something the parallel to John Cage would be drawn,” she says. “That’s a very intimidating thing! For me to say, ‘Yeah, I can do this art form. I can put my spin on it.’ It was coming out so quickly. I was working morning ’til night, just playing and writing.”

The session yielded her breakthrough LP, Bloodroot, the eighth release on tiny Brooklyn indie Telegraph Harp. Soon Moran would get written up by the New York Times (“That was when it I was like ‘shit just got real,’ because that made me feel like I was having a full body panic attack for like a solid hour”) and receive an Instagram DM from Oneohtrix Point Never’s Daniel Lopatin about touring in his band (“I was wearing a Garden of Delete shirt when he messaged me. I have a witness. It was the greatest DM I’ve ever gotten”).

Bloodroot was a meticulously composed work for prepared piano and electronics — the vinyl comes with a poster of the score. But Ultraviolet, her Warp debut, is a more freewheeling, jazz-like endeavor that swarms with gamelan-style rhythms and the deep ambient drones of artists like Eluvium and Tim Hecker. The entire album was spawned from a single day spent communing with nature. Moran, in-between leases, was living with her parents for a few months, struggling with a commission for another artist. Frustrated to the point that music “became nightmare of a labor,” she took a day to hike and swim in nearby Welwyn Preserve County Park, which has trails that lead to the beach on Long Island Sound.

“I had this magical moment in the woods, which I know sounds kind of cheesy, but it’s true. I was squatting down and listening to the echoes and reverberations of the forest — all the sounds, the insects, the birds, the echoes, just everything that was happening,” she says. “I had this moment of thinking that everything I was hearing was so beautiful and the energy behind it felt so natural and effortless, because I was literally listening to nature. I thought, “How can I make music that that feels like this, that sounds like this?”

Inspired, she hiked back home and started playing piano. “This was the first time in a really long time that I had just sat down and played for fun, with no intention. Isn’t that crazy?” she says, gesturing for emphasis. “That I’m a musician and I do this every day, but I’d never did it just, like, to enjoy myself? Obviously making music and writing is fun for me, but I never let myself go in the way that I did that day. And it just completely changed everything. … I’ve been working my ass off for a month and it yielded two measures, and then in one day it was so much stuff.”

Moran says she recorded nearly three hours of music that day and then spent two months editing it. She ultimately transcribed her improvisations and leaned how to play them for Ultraviolet. On her upcoming tour, Moran plans to focus on playing those same improvisations from that day.

“It’s actually insane,” she says, “that one crazy day got me a record deal with Warp.”