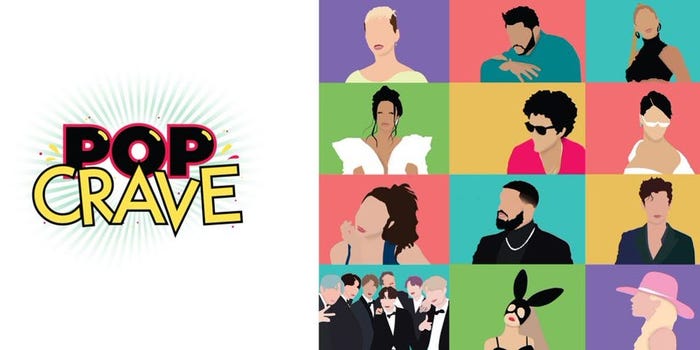 In summer 2015, Will Cosme, a journalism school drop-out, spent his lunch breaks at Home Depot in Miami the way he spent nearly every moment of spare time since working there — brainstorming business plans. A pop culture obsessed digital native, Cosme, then 22, had been engaged in digital fandom for the better half of his young life. As an intensely plugged in fan of R&B stars like Frank Ocean and Tinashe, Cosme spent his adolescence embedded in a participatory culture, where he and fans like him constantly strived to keep their chosen artists in the cultural conversation by initiating trending campaigns on Twitter. For Cosme, rechanneling the fervor and labor of fandom into something potentially monetizable was the golden-egg idea that shifted him out of retail and into the pop culture industry.

"Pop Crave," he typed into his document of potential names for his business venture, one night after work. That same week he created a Twitter account with an Andy Warhol inspired cartoon Marilyn Monroe as an icon, and a slogan: Pop Crave, "Your Go-to Source for Pop Culture News, Chart Updates, Music Releases & More!"

Ever since its launch five years ago, Pop Crave has quickly become an ambient and ubiquitous presence on Twitter, and currently boasts over 598,500 followers. It frequently beats legacy publications like Billboard and Rolling Stone in being the first to disseminate music news, as well as circulate niche data others have missed. Pop Crave has become a leading entertainment news source on Twitter.

Pop Crave's popularity on Twitter, specifically, should come as no surprise. In its lifespan, the 240-limit microblogging site has become a digital network for real-time news, both affecting its production and consumption. While, traditionally, the journalists have acted as a filter for sourcing and verifying information, Twitter has encouraged a quest for speed among journalists, something that Pop Crave has taken expert advantage of. While Pop Crave deems itself a legitimate journalistic news source, others have been skeptical.

Now that Pop Crave is growing exponentially, the brand represents a quandary in entertainment news, as it threatens to break the rigid boundaries of professional journalism.

This isn't something Cosme would have considered when he set to work on Pop Crave during that summer five years ago, alongside friend Harry Johnson. Each day, while still working his shift as a store assistant, Cosme would spend an average of ten hours "relentlessly posting content," and scouring through celebrities' social media pages, trying to find untapped data he could give meaning to. For the first three years, Cosme wasn't making a profit. He took many bathroom breaks at his store assistant job so he could keep writing news updates throughout the day. His friends and family couldn't fathom it, they told Cosme he was wasting his time.

"What kept me going was my pure love and passion for pop culture and pop music. I wanted to create something out of nothing so bad," he says. Cosme found a gap he was determined to fill. "I'd come across thousands of accounts dedicated to different things, but there weren't any independent news accounts at the time." He had a clear vision in mind — a platform for pop culture enthusiasts that would roll out daily news, chart updates, throwbacks, music anniversaries, and fun facts.

"Twitter was the perfect tool for us because it allows us to crank out news as quickly as we do and it taught us how to get directly to the point in so many characters, which is what fans love," he says. "They get the whole story in a nutshell. I think we were able to create such a presence because we're consistent, there's no 'off' button for Pop Crave."

As Pop Crave gained more influence and momentum, Johnson and Cosme enlisted their mutual friend Jericho Caprio to join the team, but "80% of the work" still fell on Cosme. In 2018, he began recruiting writers — most commonly journalism graduates fresh out of school —  for volunteer work. His team of eight, he says, have "backgrounds from across the board."

They all work individually and remotely, and communicate and distribute workload via Whatsapp, and more recently through Zoom, though Cosme is soon looking to purchase an office. Within the next two years, he hopes to be able to pay his staff a full-time wage, but for now, Will says that anyone working for Pop Crave will be "happy to build their portfolio and learn about entertainment media." People who do work for Pop Crave are also rewarded with college credit and 'perks' whenever they become available.

Shae Woodward, who joined Pop Crave in late 2018, says that while staff aren't paid, "it isn't about the money." For Woodward, who previously worked in business development and marketing at PeopleTV, Pop Crave is more like a "passion project," which she hopes will one day materialize into a full-time job. For now, although staff don't supposedly work on a full-time basis, Pop Crave is a "24/7 hour gig."

For its staff, Pop Crave is more of a passion project than a full-time job

In February 2019, around the time Cosme left his job as a store assistant in order to pursue Pop Crave full-time, Drew Howard came on board as an editor. A graduate from Grand Valley State University, Howard moved to New York for a three-month internship in New York, where he wrote about personal finance, before moving back to his home city of Michigan, where he spent his days looking for writing jobs on Indeed.com. When he was eventually hired into a virtual role for a $2,000 fee, he never saw that money.

Pop Crave seemed like a lifeline in an otherwise unavailing landscape. The account had 270,000 followers by the time Howard joined, but it's since accumulated more than double that in a little over a year. In that time, he's had the opportunity to connect with journalists from Rolling Stone, Variety, Billboard, and many more, while they've used Pop Crave as a source — furthering the Twitter account's credibility. He's also witnessed an explosion of Twitter news accounts inspired by Pop Crave, leading him to believe that the future of music journalism is down the very path he's on.

As staff newsrooms are radically downsizing, and publications are going under, Howard feels he has nowhere else to put his faith than in Pop Crave. "I don't see myself applying for jobs at a place like Billboard or Rolling Stone or Vulture in this media environment with the pandemic," he says. "The most I've ever been paid to write (outside of PopCrave, to be clear) was about $75 dollars a week. I don't want to put my trust in major (and trashy) corporations anymore, we want to start our own thing." Pop Crave stands out from these outlets, Howard believes, since its shortcomings have become its strengths. "Because most of our news is in tweet form, and not an article that requires you to click on it, we are providing more information in our captions." In other words, Pop Crave isn't clickbait, according to its staff.

Paul Bridgewater, who has a background in marketing, and is the current editor-in-chief of independent music website The Line Of Best Fit, views Pop Crave a little less generously. "Everyone who's producing content is complicit in the grey areas around clickbait," he says, "but there's a line that's often crossed." No matter how careful the journalist's phrasing, nor how neutrally presenting, entertainment news is almost always likely to elicit a reaction. "That's part of why we do it, but then you have [Pop Crave], a faceless, almost anonymous twitter account spewing out tweets as content, and doing it in a way that's meant to feel like they are some pop-obsessed website."

Cosme and Howard are insistent that Pop Crave is a legitimate source of music journalism. "The goal of journalism, as I was taught, is to communicate a message that's straightforward, free of bias, fact-checked and easily digestible," says Drew. "Over half a million users trust us enough to get their info on our page, so if that's not journalism, I don't know what is."

Gary Suarez, who has worked as a freelance music journalist for almost two decades, writing for the New York Times, NPR, and Forbes, among others, believes Pop Crave has less to do with journalism than it does with online fandom. "It's a disruptor that has zero interest in journalism, preferring instead to appeal to the fans and stans scrolling on social," he said. "It doesn't exist as a replacement for music journalism, because that wrongly implies its followers were people who'd also, or were it to disappear, instead read music journalism."

Suarez has had Pop Crave blocked on Twitter for a while now, after noticing that it sometimes pulled content from other publications "without the professional decency of crediting or linking." Recently, however, it appears that Pop Crave has made a concerted effort to credit other sources.

Suarez calls Pop Crave "an optimized way to convey certain bits of information to music fans on social media" that on its best day is a "link farm."

Some staff agree that Pop Crave's reporting is more aligned with internet fandom culture. "I'm not sure how to summarize exactly how we fact check," says Howard, "but a lot of it comes from a basic understanding of Stan Twitter. We're good at sniffing out what's fake and what's real just from our experience on the platform. There are also platforms like Reddit and ATRL that help us, as well as the thousands of stan accounts that are doing their own version of reporting."

But Cosme is adamant that Pop Crave fact checks just like any other major organization would. " Our credibility and reputation are important," he says.

One credibility campaign the group is embarking on is trying to get verified on Twitter. Since Pop Crave's content is so inimitable, numerous parody accounts have emerged on Twitter, with the same cartoon Marilyn Monroe icon. "We run into these daily, and to be honest, it's frustrating and distracting," says Will. According to a Twitter spokesperson, the website has "paused public submissions for verification. However, our teams around the world continue to work closely with trusted partners to verify select accounts." They refused to provide any details on individual accounts like Pop Crave.

Recently, Cosme launched a Pop Crave website. Popcravenews.com features, interviews, and longer-form content, with the intention to give his brand "an editorial voice" as well as something "professional-looking" that will "attract artists who want to collaborate with us." The team is also developing a podcast, which they hope will bring in a steady cash flow.

Perhaps most notably, Pop Crave gained attention for being one of the first outlets (at nearly the same time as Insider) to call the 2020 presidential election in the US for Joe Biden, via Decision Desk HQ. Howard told Mel Mazine that they have no plan to get into politics in the long term, but true to their style, "We only jump in when we feel something is trending so much that we can't ignore it."

What happens to QAnon after Trump leaves the White House?

Top YouTubers flooded Twitter with pro-Biden sentiment, suggesting a history of non-partisanship may be coming to an end

The controversies of 19-year-old TikTok star Zoe LaVerne, who apologized for kissing her 13-year-old fan