'I can't get your bra off me': Kesha's crazy cathartic Rainbow Tour ends in Sydney

Peak Kesha arrived not when a man in a Godzilla costume emerged from a spaceship, or when the queen of glitter in the gutter sprayed confetti from a rainbow cannon across the crowd. 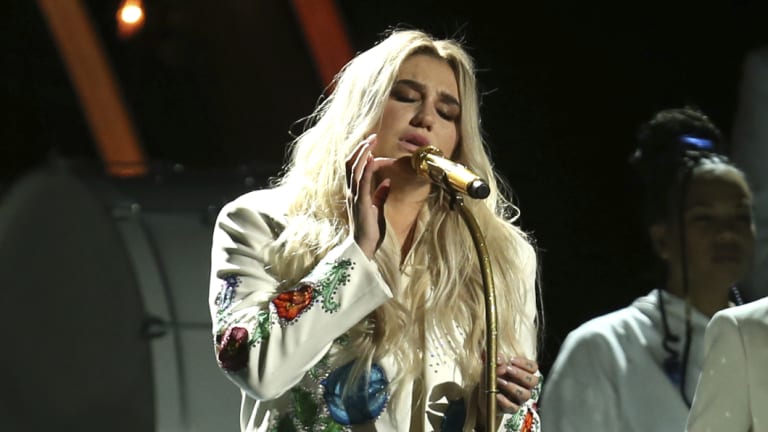 Kesha’s “Praying”, performed here at the Grammys, was the most blissful, transcendent moment of the Sydney show.Credit:AP

No, it came when a piece of underwear thrown on stage got tangled in a frilly wing of a costume that’s part Barbarella, part crimson rosella.

“I can’t get your bra off me,” Kesha said during the hedonistic electropop banger Take It Off.

It’s a moment that sums up the hot mess that was the last show on her worldwide Rainbow Tour, which was tacky, tasteless and occasionally terrific.

Kesha’s bargain bin Cher chic was on show from the start, although a headdress was dispensed with early as she wrestled her tresses while delivering the cloying platitudes of empowerment anthem Woman.

The themes of being unashamed and loving who you are continued throughout, and We R Who We R was dedicated to “all my LGBTQ animals” as she tied a rainbow flag to the microphone stand.

Better, however, was Bastards, a deceptively simple ballad that starts as a girl with a guitar and shows the vocal and songwriting abilities that are too often obscured. The band kicks in halfway though and it ends with a stirring Hey Jude-style crescendo, complete with "na-na"s.

Most of the short, sharp set was filled with the obnoxious bangers you love, hate or secretly enjoy when not with your mates. Timber wasn’t any better without Pitbull, but there were more guitars, Die Young sounds like a can of pre-mix vodka come to life for karaoke, and Blow had the rainbow confetti cannon.

If you were on board this crazy train, you were going to enjoy it, but there was a nagging feeling that for a major international artist she should be better than this.

She can be: the proof came with the night’s only truly blissful, transcendent moment. Praying, a song at least partly written and released in response to alleged sexual abuse, taps into universal feelings of loneliness and insecurity while offering hope and forgiveness. And with the emotion of singing it for the last time on the tour, it was impossible to be unmoved.