Harry Styles’ fans were not happy when they received a notice from Ticketmaster on July 14 that the singer’s “Love On Tour” dates had been postponed … yet again. “Not me finding through ticketmaster that love on tour is postponed rather than mister harry styles himself,” one unsatisfied fan tweeted. “The fact we had to find out thru a Ticketmaster email that tour was rescheduled instead of @Harry_Styles himself is disappointing to say the least,” another ticket holder wrote. Styles’ “Love On Tour” tour was supposed to begin in 2020 in support of his “Fine Line” album and span across America and Europe, but the dates were postponed twice in 2020 due to the coronavirus pandemic, per Daily Mail.

Now, Styles is addressing the disappointment amongst his fans by sharing what is really going on with his tour. “LOVE ON TOUR will be going out across the USA this September and I could not be more excited for these shows. As always, the well-being of my fans, band, and crew, is my top priority,” he wrote on Instagram the same day before continuing on about safety guidelines information. “Please notice that some dates have changed, and new shows have been added,” he revealed.

However, not all fans will get to experience Styles’ upcoming tour — at least for now. Here’s why.

Harry Styles has something planned for everyone 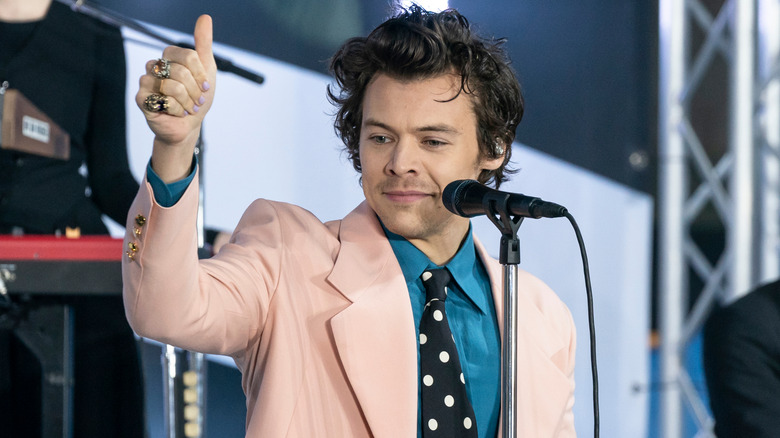 While the North American leg of Harry Styles’ “Love On Tour” tour is set to kick off in late 2021, the tour is still postponed in the rest of the world. “To everyone in the UK, and across the world, I can’t wait to see you again, but for obvious reasons it is just not possible at this time,” Styles continued in his July 14 post to social media. However, all his fans got a small gift from him with the announcement, as he confirmed he’s got something in the works. “I will be sharing more news soon about shows across the globe, and new music. I love you all so much. I’m very excited, and I can’t wait to see you. H,” he concluded.

Per usual, the former One Direction member’s fans took to Twitter to express their gratitude for his update. “On the bright side…. Harry Styles just said ‘new music’!” one fan account exclaimed. “New music by harry styles is all i need to survive,” a pleased fan tweeted. “Harry styles i hope u know i am not sleeping for the next 2 months just in case u drop ‘new music’ while i’m asleep,” a third fan wrote. Although not everyone can see Styles in person for a bit, new music from the singer is something all his fans are clearly excited to enjoy.