From Starbucks to stardom, why Jorja Smith is one to watch

Two years ago, Jorja Smith was, by her own admission, a substandard barista working at a Starbucks in London. Now she is sitting at the stylish cafe-cross-deli Daylesford, in the upmarket suburb of Notting Hill, sipping on "spirit tea" that arrived at our table in separate parts and with instructions on how it should be assembled. Her newish home is just around the corner, but she's barely been able to spend any time on its rooftop terrace so busy has she been touring the world with her acclaimed debut album Lost & Found. Wearing grey tracksuit pants, with a white hoodie covering her hair, Smith has this morning flown in from a gig in Helsinki, Finland, and her suitcase sits next to her waiting to be unpacked. And Starbucks? "I think they have me on their playlist now," she jokes.

For if Jorja Alice Smith was ever lost, it has not taken her long to find her place in contemporary music. She has collaborated with Drake and Kendrick Lamar, two of the biggest R&B/hip-hop artists of today; supported the tour of another star, Bruno Mars; was on the line-up for Coachella; and has had her music feature prominently in the hit HBO series Insecure. Musically she has garnered comparisons to Adele, Rihanna and Lauryn Hill and has been dubbed a potential "poster girl for the rebirth of jazz". Earlier this year Smith became the first unsigned artist to nab the Critics' Choice Award at the Brit Awards and Lost & Found was nominated for the Mercury Prize, putting her in league with established acts such as the Arctic Monkeys, Florence + The Machine and Lily Allen. Not bad for someone who is just 21 – although Smith describes herself as having always felt like an "old soul". 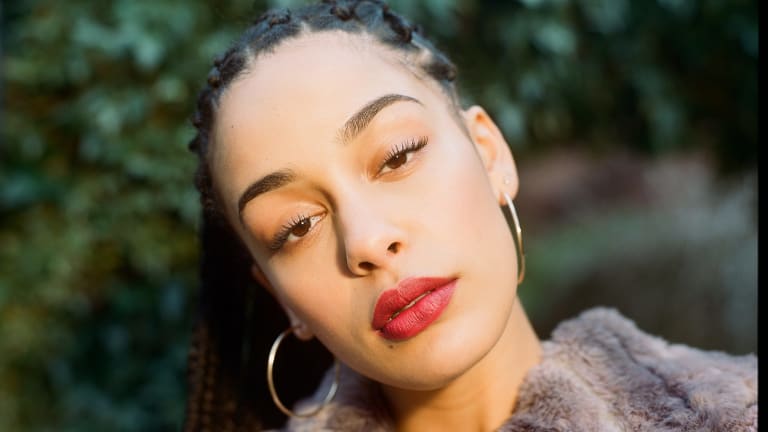 "I've never really had goals. I don't like them. I just don't like being disappointed. I'm the only person that can disappoint myself and if I set myself goals that I can't do I think, 'oh that's not good'," Smith says. "I just kind of write songs, that's it, because I want to. There's a lot going on in my head so I have always written songs."

Smith is warm and friendly in conversation, both playful and earnest. Yet you get the impression she may privately be counting down the moments until she is relieved of her media obligations and able to go home. And who can blame her? A lot of people her age are on their gap years or studying at university – certainly not having to deal with UK tabloid The Sun describing them as Drake's "hotline thing" (a reference to his track Hotline Bling). 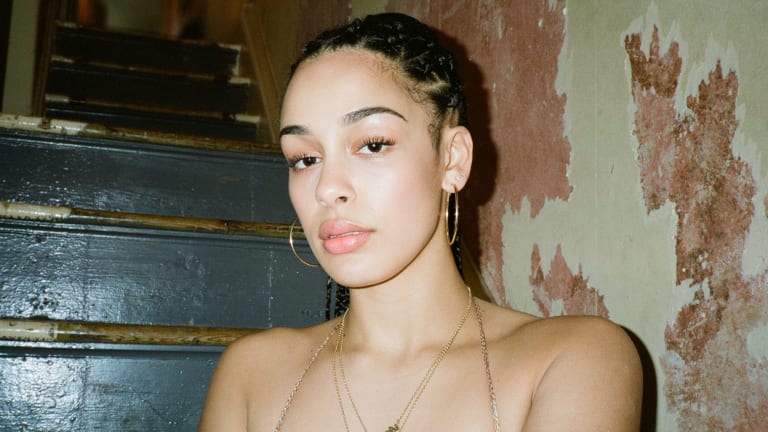 Jorja Smith’s life has transformed over the past two years.

If her rise feels meteoric to the rest of us, it doesn't to Smith. She grew up in Walsall, north west of Birmingham, a former industrial town famous as the home of England's saddle manufacturing industry and for making leather goods for the Royal family. Her mother makes jewellery and her father was a soul singer, with both encouraging her interest in music from an early age. When she was eight she learned to play the keyboard, and at 11 she created her first song Life is a Path Worth Taking (which she performed at a family friend's pub). A high school music scholarship followed, and Smith was classically trained in singing and learned the oboe.

"I've just always sang and tried to get better and better, and when I started writing properly when I was 16 I would come downstairs and play my music for my mum and dad and they would be like, 'oh I can't hear a chorus there' and I'd be like, 'I hate you, you don't know what you're talking about' and then I would go back to my room and change it," Smith says.

"I miss doing that, being at home, and sharing music with them."

After watching other musicians share recordings of themselves on YouTube, Smith posted her cover of Alex Clare's song Too Close in 2012. Recorded in her family home with a friend playing the guitar, she has her hair tied back, a make-up-free face and wears a loose T-shirt. In another shaky recording, she wears her school uniform and is on campus as she sings Katy B's Mission. Smith seems far from the glamorous, confident and stylised pop star who now sells out stadiums, but the strength of her voice is undeniable. A manager recognised the potential after seeing the videos and reached out to her. With her father, Smith went to London to meet the man at a Nandos (coincidentally opposite the Starbucks where she would work). So by 16, she had a manager. At 18, after finishing her A-levels, she moved to London, and lived with her aunt and uncle. 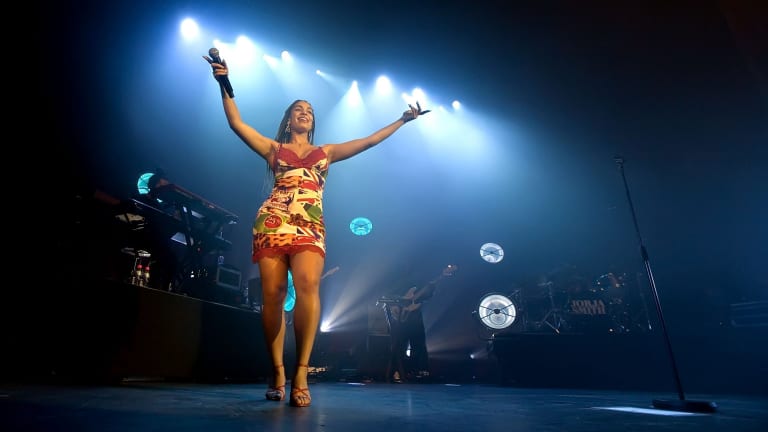 "I think I've always just wanted something else. Walsall is quite slow, not a lot happens. It's not for me. It's cool to grow up in. A lot of my friends are really creative but there just wasn't opportunity. That's why I moved, I needed that next opportunity," she says.

Smith didn't have to look for a new job after she quit Starbucks in late 2015. She released her first single Blue Lights on SoundCloud in January 2016 – and almost immediately the spotlights were turned onto her. Her powerful vocals dominate the soulful song about police prejudice ("There's no need to run/if you've done nothing wrong/ blue lights should just pass you by" she warns), which would later come to be played at Black Lives Matter protests. The song noticed up hundreds of thousands of streams, and attracted the attention of Drake, who contacted her via Instagram asking her if she might like to feature on one of his tracks. Her response? "I'm not really sure." 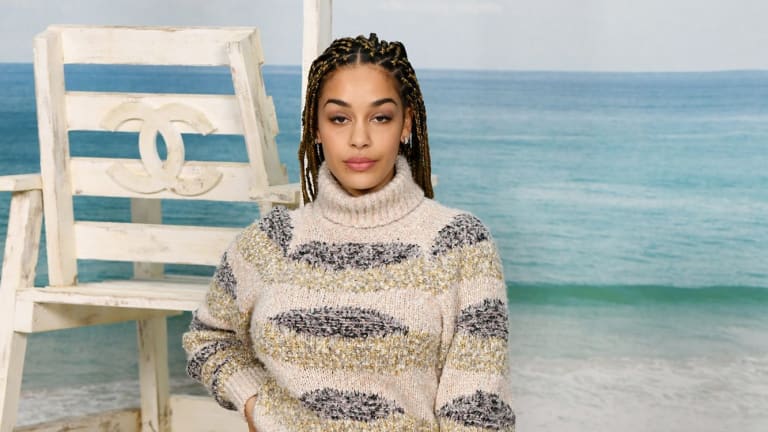 "When I first heard his song I really liked it, but I didn't write it and I write my songs. I thought this is really good but I don't relate to what the lady is singing about," she says.

It was only later, after Smith had split with her then boyfriend, that she reached out to Drake to see if he still had space for her. She featured on two tracks – Get it Together and Jorja Interlude – on his album More Life. Wasn't it a bold move for an emerging artist to reject a collaboration with Drake? 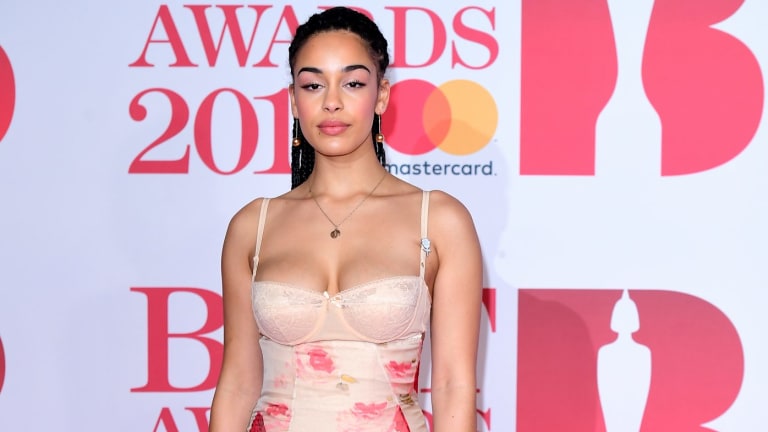 Jorja Smith at the Brit Awards in London in February.Credit:IAN WEST

I'm the only person that can disappoint myself

"I wanted to be honest with myself," Jorja says nonchalantly. 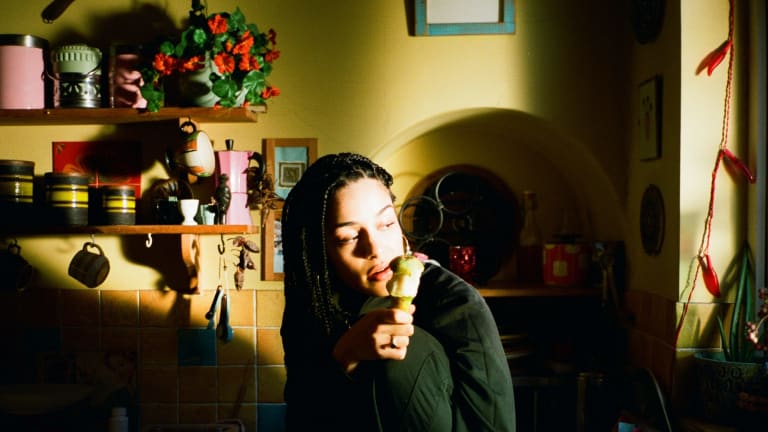 Jorja Smith says she misses being at home and sharing music with her family.

Authenticity is the reason Smith deeply admires Amy Winehouse's music. Her parents played Winehouse's Frank at home, but it was only when she moved to London that she truly appreciated the depth of her work (she's since watched the documentary about her life dozens of time).

"What I love about Amy's voice is she is so honest, like, you can believe everything she is singing. A lot of people aren't like that. It's really important to me that when people listen to your voice they feel that you're being honest, so people can like feel like they are not alone."

"That's important. Feeling relatable and not being scared to talk about what is going on. She was just raw and memorable and honest."

Those latter three traits could also be applied to Smith's music, which crosses between rap, hip-hop, R&B and soul. The songs on Lost & Found were written over four years, from when Smith was aged 16. As well as being musically diverse, their subjects range from the personal ("How could we know/That there wouldn't be a tomorrow," she sings in Tomorrow, written for a friend after a mutual friend died) to the political ("So why are all the riches staying afloat?/See all my brothers drowning even though they're in the boat" she raps in Lifeboats (Freestyle), an incisive exploration of class).

"I'm quite an open person so I'm not really scared to say, like, whatever. It could be horrible but honest. I'll sing it because it means something to me, no one asked me to sing it," Smith, who released Lost & Found through her own label, says.

If Smith has managed to maintain her musical independence as her career has skyrocketed, she has had to accept change in other areas of her life. She has had the glare of the media on her and her private life, and her growing fan base means she is recognised in public. She no longer catches the Tube and she can't enjoy a gig or a dinner without being interrupted by a fan asking for a selfie.

"I just realised that it is 10 seconds of their life, whereas its my whole night. I just realise to them it's something tiny but for me its constant. But I'm learning to deal with it," she says. "Sometimes I get a bit anxious going to places if I see certain people … anyone who is young, girls with braids, I feel like they know about me."

However, she quickly adds, "I would rather this than still be working at Starbucks".

Lost & Found is out now. Jorja Smith will tour Australia in January and February, including playing Laneway festival in Sydney on February 3 and Melbourne on February 9.