Queen and Adam Lambert are in the Land of the Rising Sun for the rest of the month, as they gear up for four Japanese concerts. The collaboration will perform in Tokyo this weekend at the Saitama Super Arena twice, before heading on to Osaka and Nagoya. And during their stay in the capital, both Brian May and Roger Taylor attended the capital’s Queen Exhibition to pay tribute to Freddie Mercury himself.

May posted a snap of himself and the Queen drummer standing next to a wax figure of Freddie performing.

The 72-year-old also shared a couple of videos of the displays which included a costume of the late singer’s and a manga starring the Queen bandmates, including retired bassist John Deacon.

May wrote: “We visited the Tokyo Queen Exhibition this evening. Beautifully done, guys.

“Quite surreal for Rog and me, treading back through all those wonderful years – all those extraordinary and truly magical encounters in Japan. Thanks.” 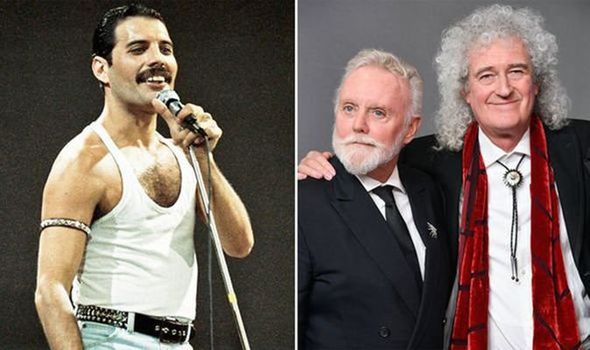 We visited the Tokyo Queen Exhibition this evening. Beautifully done, guys. Quite surreal for Rog and me, treading back through all those wonderful years – all those extraordinary and truly magical encounters in Japan. Thanks all !! #nihonbashitakashimayasc #queenwillrock #freddiemercury #tokyo —- Bri

May also had a chance to pop into Tower Records to promote his autobiography of sorts, Queen in 3-D.

The book comes with an OWL stereoscope so fans can view previously unseen pictures of Freddie and the band in 3-D.

In fact, The Queen guitarist spoke exclusively with Express.co.uk back in 2017 to promote the book.

He said how Freddie embraced the art of photography too, despite being known for being shy when off stage.

Tower Records !!! Thanks for a great welcome !! And for spreading the word about QUEEN IN 3-D in Japanese !!! And a hand-print ceremony ! Documented in photos by Agent Ashley ! Thanks !! Bri 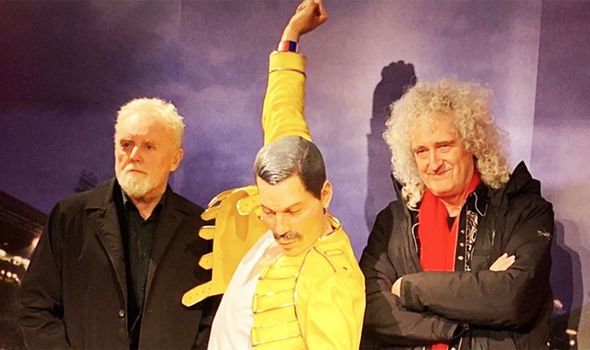 May said of the unseen Freddie snaps: “It’s pretty much all unseen.

“Nobody has seen these pictures except for in private.

“Apart from the fact that they’re in 3-D, they’re my own personal pictures.

“Really ninety per cent of it or more has never been seen before.”

DON’T MISS…
Queen make historic first with THIS – ‘Who could have imagined?’ [COIN]
Queen: ‘Bohemian Rhapsody gave us new life, but was very DIFFICULT’ [INTERVIEW]
Queen and Adam Lambert: Brian May ‘BLOWN AWAY’ by THIS – WATCH [VIDEO]

When it comes to a favourite, the guitarist picked out one of Freddie backstage applying make up, because of how it makes you feel like you’re with him.

He said: “For me, that sums up Freddie. Someone behind the big front, very pensive and shy.

“The whole thing springs to life and you really feel like you’re in that room with Freddie.”

Meanwhile, in a new Japanese interview, May opened up about missing Freddie, who died in 1991.

May said: “Sometimes when people ask you a question, we have a feeling we’d know what Freddie would say. It’s not because he was predictable, but we kind of know his unpredictability.

“And, of course, he was like a brother to us, so we know him very, very well. We created this whole scenario which is Queen; this whole genre, this whole oeuvre if you will of Queen music.”

“And it’s wonderful that people are now discovering it in even more detail now than they did in the past. So Freddie is always with us. He has to because he’s a co-creator. There are moments when I feel sad, of course, because he’s not here to enjoy it.

“But mostly I feel great joy that we had this experience and we had this wonderful spectrum of Queen music that we can still explore and communicate and share with a new audience. So it’s a good feeling I have about Freddie.”