Emmerdale star Mark Jordon, who plays former soldier Daz Spencer on the soap, has been charged with grievous bodily harm and assault.

The Yorkshire Evening Post reports that 53-year-old Jordon is due to appear in court next month after being arrested and bailed following an incident on July 1 in the Farrars Arms Pub in Oldham. He has been accused of assaulting a pensioner.

A spokesman for Greater Manchester Police said: “Mark Jordon of Tamewater Court, Oldham, has been charged with GBH and section 39 common assault. He will appear at Tameside Magistrates’ Court on November 8. 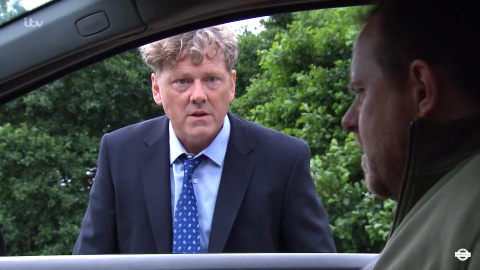 “Shortly before 9.30pm on Sunday, July 1, 2018, police were called to reports of an assault on Shaw Hall Bank Road in Oldham.

“A 67-year-old man was taken to hospital with facial injuries.”

Jordon first appeared on Emmerdale as Daz in 2014 for a guest stint, and he joined the regular cast in 2017.

Apart from the ITV soap, he was best known for playing Phil Bellamy in Heartbeat for 15 years from 1992 to 2007. He has also appeared in shows including Coronation Street, Casualty and Hollyoaks.